On Friday, NBC’s Today show joined the morning broadcast chorus of ABC and CBS in claiming a .6 percent drop in inflation heralded the end to America’s economic woes. And despite admitting food prices are still “soaring” and the price of crude oil was creeping up again, correspondent Sam Brock tried to paint a rosy picture of the economy. 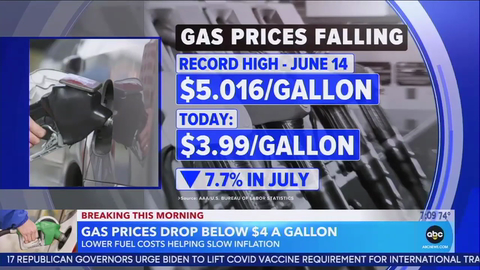 Following CBS Mornings’ lead, ABC’s Good Morning America used the .6 percent drop in inflation for July to declare firmly that “we’ve turned a corner on inflation” ahead of the midterms that are set to handily strip Democratic control of the House. They were also bold (or desperate) enough to suggest that paying over $4 a gallon for gas “feels like a bargain.” Inflation fell .6 percent in July and CBS Morning was treating the news like it marked the end to the Great Depression. With gas prices still way above where they were last year and people still paying through the nose for basic necessities, on Wednesday, CBS business analyst Jill Schlesinger joyously proclaimed that inflation had “peaked” and spewed the Big Lie that America was not experiencing a textbook recession. 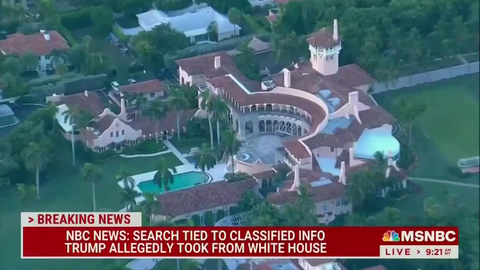 The lack of transparency from the FBI about their Monday night raid of Mar-a-Lago and the Trump team not releasing the search warrant has left a lot of room for incendiary and impotent hot takes. And it left one MSNBC national security analyst, Clint Watts, room to suggest that the secrecy surrounding the raid was on par with the secrecy of the Navy SEAL raid that killed Osama bin Laden. The network also lamented that this was a distraction from Biden’s “big legislative wins” this week. 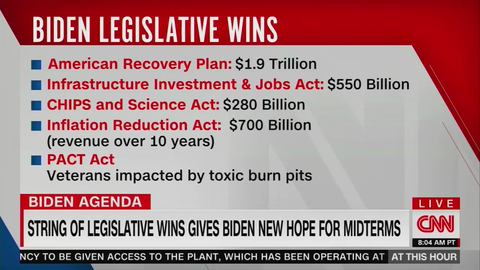 Harwood: You MUST 'Stop and recognize' the Achievements of Democrats and Biden
Nicholas Fondacaro

With congressional Democrats ramming through yet another massive spending bill, which honest economists say will worsen inflation and raise taxes on average Americans, the liberal media are fiercely gaslighting the American people to believe President Biden and the Democrats were their saviors. And on Monday’s At This Hour, CNN White House correspondent John Harwood proclaimed that we all need to “stop and recognize the breadth of” all the achievements of Biden and the Democrats. Cuomo: The Things I Said on Camera Are Not What I Said
Nicholas Fondacaro

After making headlines with the second episode of his podcast, The Chris Cuomo Project, for saying the January 6 Committee was largely playing a “gotcha game” and the idea former President Trump would get charged with “treason” was a play to “fringe aspects” of the Democratic Party, Chris Cuomo walked back some of his assertions on Thursday and claimed media reports weren’t telling the truth and weren’t quoting him. The months-long search for someone, anyone to fill the “conservative” seat on The View, vacated by former co-host Meghan McCain, ended Thursday with the poorly kept announcement that they would be hiring faux conservative Republican Alyssa Farah Griffin. But not only were they set to add one pretend right-winger to the coven, but they also doubled down and announced that rotational co-host Ana Navarro would be going full-time (eventually). 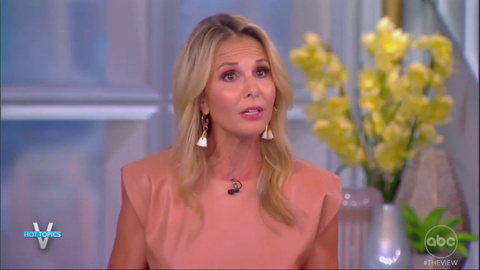 Bringing the hassle back to ABC’s The View on Wednesday, former conservative co-host Elisabeth Hasselbeck returned to celebrate the 25th season and confronted the cast on the pro-life alternatives to abortion. And her compassion for life was greatly needed on the show as co-host Whoopi Goldberg ghoulishly proclaimed that since “God doesn't make mistakes” he made her “smart enough to know when” abortion was the right call. 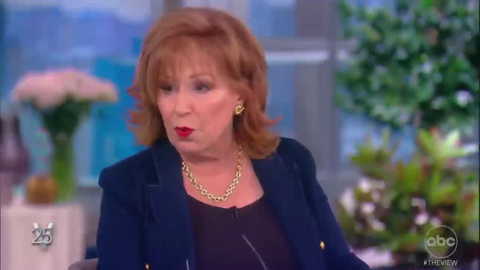 The View: GOP Unwilling to Kill Terrorist Leaders Like Dems Are
Nicholas Fondacaro

The day after news broke that Al Qaeda leader and 9/11 plotter Ayman al-Zawahiri was killed in a CIA drone strike approved by President Biden, the cackling coven of ABC’s The View danced around their caldron and suggested, without evidence, that Republicans are unwilling to kill terrorist leaders and only Democratic presidents are. They also threw a potent double standard into their brew by whining about who did and didn’t get credit for killing Osama bin Laden. 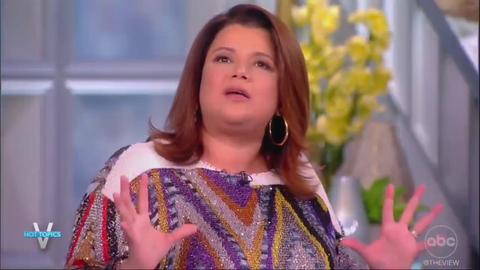 The View: Drag Shows Are Fine for Kids, No One Killed By Them Like Guns
Nicholas Fondacaro

In something of a double-down to a segment from last week, co-host Ana Navarro spent part of Monday’s The View making the totally rational argument (sarcasm) that sexually explicit drag shows weren’t that bad for kids because kids aren’t killed by them like they are by guns. She also claimed red states were like Cuba and North Korea in that they’re supposedly barring their citizens from leaving their borders.