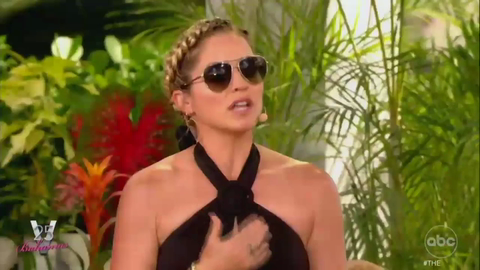 The View might be broadcasting from a resort in the Bahamas, but it doesn’t seem to be doing anything to improve their state of mind. Thus was the case on Tuesday as the cast was again up in arms over yet another U.S. Supreme Court ruling; this one validated the right to religious liberty and expression under the Constitution. Together they demanded that prayer be kept private and suggested that animal sacrifices were going to become common place on the football field in certain communities. With last Friday’s episode being prerecorded, Monday’s edition of The View was the first time the “rabidly pro-choice” coven was able to collectively shriek about the U.S. Supreme Court overturning Roe v. Wade. The tirades came with co-host Whoopi Goldberg issuing a warning to Justice Clarence Thomas that the court will take aim at his interracial marriage and possibly even rule he’s not a person again and bring back slavery. In a Friday evening liberal screed disguised as a report on ABC’s World News Tonight, anchor David Muir and senior national correspondent Terry Moran had a wider audience to spew their hatred of the conservative U.S. Supreme Court justices after they overturned Roe v. Wade earlier in the day. Between the two, it’s clear the network was in mourning for the nonexistent “right” to kill an unborn baby. 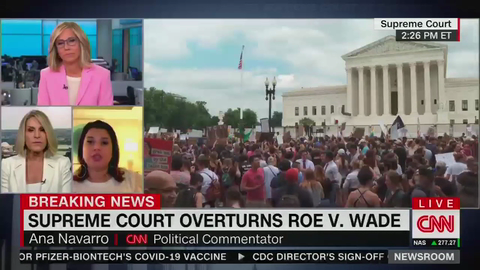 In the wake of the U.S. Supreme Court overturning Roe v. Wade on Friday, the ugly mask worn by the liberals of CNN slipped to show the ugliness underneath as CNN Newsroom host Alisyn Camerota and faux “Republican” commentator and co-host of The View, Ana Navarro made the ghoulish argument that kids in foster care and relatives with cognitive disabilities should show the obvious need for abortion. 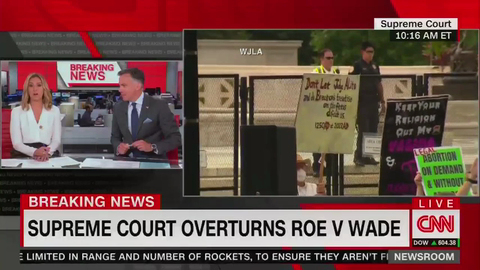 Crying for Roe: CNN Claims Women Will Be Barred from Tracking Their Cycle
Nicholas Fondacaro The biggest benefit of the U.S. Supreme Court striking down New York State’s arduous restrictions on the concealed carrying of firearms is that the right to do so would not be restricted to just the rich, famous, well-connected, or those who once wore the badge, but would be a right enjoyed by any law-abiding New York citizen. But on CNN Newsroom immediately after the news broke on Thursday, they decried the right to conceal carry outside the home being considered a “first-class right” along with free speech. And one of their most voiced concerns was people carrying in Times Square. 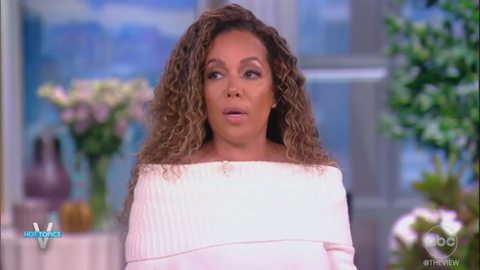 With the Supreme Court finding that New York’s arduous restrictions on the concealed carrying of firearms violated the Constitution in a 6-3 ruling on Thursday, the unhinged coven that made up ABC’s The View lost their minds. Calling the ruling “pure insanity” and “a middle finger to New York,” the cast was on a downward spiral from the get-go. They even seemed to encourage violence against the court and justices. The freelance and gig economy has seen their numbers swell as millions of Americans quit their jobs during the pandemic to take their financial future and job arrangements into their own hands, and have been seeing great results. But on Wednesday’s edition of The View, the ABC hosts touted a Beyoncé song about the Great Resignation and used it to warp the movement into one about socialism with demands for a $26-per-hour minimum wage hike. When it comes to the First Amendment, the liberal media only care about the fraction that deals with the press and those they think they can abuse to limit conservatives, and anything outside their notions is an attack on it. Thus their disdain for religious liberty was on full display during Tuesday’s CNN Newsroom after the Supreme Court ruled 6-3 in favor of religious liberty and against state-sponsored discrimination of religious schools. 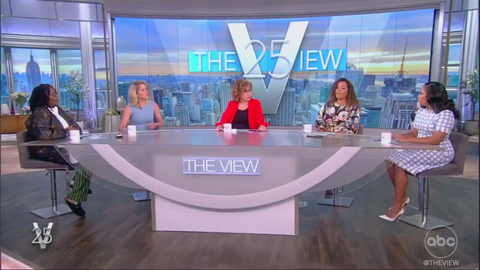 The leading “hot topic” for ABC’s The View on Tuesday, was the disgusting campaign ad put out by Republican Missouri U.S. Senate candidate Eric Greitens where he and a group of gun-toting cosplay soldiers wanted to “hunt” RINOs. This naturally, led the cast to ignore the widespread condemnation from the right and insist the right thought it was “funny” and had become “the party of violence!”