After Kanye West met with President Trump in the Oval Office on Thursday, he faced a firestorm of criticism from liberals and fellow celebrities.

During the meeting, West went on a tirade, praising Trump and sharing with the media that he looks up to the president.

He said that his “Make America Great Again” cap made him “feel like Superman” and that many of his friends tried to get him not to wear the hat.

West also said, "Trump is on his hero's journey right now ... He might not have thought he’d have a crazy mother-f----- like Kanye West run up and support, but best believe — we are going to make America great.”

After his meeting, the backlash was harsh.

Comedian Chelsea Handler tweeted, “Kanye West says he thinks of Trump as a father. Guess who doesn’t think of Kanye as a son.”

Wow. How is that funny? 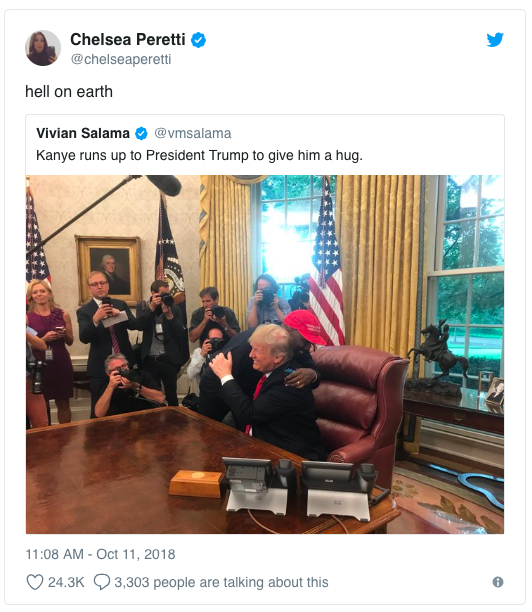 MSNBC’s Chris Hayes tweeted that, “shamelessless is a superpower and Ye has even great reserves of it than Trump.”

Fellow rapper T.I. wrote in a post on Instagram that, "At one time it was a pleasure to work alongside you... now, I’m ashamed to have ever been associated with you."

Now I’ve been extremely patient and made it a point to not jump to any premature conclusions about Ye’& his antics... Partially due to the lessons learned from the outcome of other similar situations dealing wit my brother Wayne (which I admittedly mishandled a bit in hindsight) But now this shit is next level,futuristic Sambo,Hopping Bob, Stephen off Django ass shit Ye!!!! From what I can gather... This is the most repulsive,disgraceful, Embarrassing act of desperation & auctioning off of one’s soul to gain power I’ve ever seen. Now I recall you asking me to come with you to have this meeting and I declined (naturally)... but bro... if ain’time I would’ve been in there wit you and you behaved that spinelessly in my presence,I feel that I’d be compelled to slap de’Fuq outta you bro For the People!!! You ass kissing and boot licking on a whole new level &I refuse to associate myself with something so vile,weak,& inconsiderate to the effect this has on the greater good of ALL OUR PEOPLE!!!! I’m a true believer in “It ain’t what you do,it’s how you do it.” And this shit is regurgitating🤮! At one time it was a pleasure to work alongside you... now, I’m ashamed to have ever been associated with you. To all the people who follow Ye musically,socially, or even personally....who are confused, heartbroken, infuriated.... Let me make this clear... THIS SHIT AINT COOL!!! THIS IS A MOVE YE MADE FOR YE!!! THIS IS A PLAY TO PUT HIM IN A POSITION HE’D LIKE TO SEE HIMSELF IN...WE ARE NOT ON HIS MIND AS HE MAKES THESE COMMENTS AND DECISIONS. Don’t follow this puppet. Because as long as I’ve lived I’ve learned that it benefits a man nothing at all to gain the world,if to do so he must lose his soul. We just saw Mr.West’s Soul on auction. If you listen closely you can hear the tears of our ancestors hit the floor. All I can say is... I’ve reached my limits. This is my stop,I’m officially DONE!!!! 🖕🏽Trump & His Lil Cookie Boy. #USorELSE✊🏽

"Not only was this a crazy conversation for this White House, this was the kind of conversation that would typically held between people wearing hospital bracelets,” he said.

What might be the craziest day in the craziest @WhiteHouse to date... #KanyeWest @RealDonaldTrump pic.twitter.com/1w1FpkjheX

CNN’s Don Lemon hit a new low after using West’s mental health and his late mother to disparage him, as MRCTV reported.

Lemon went so far as to say that his mother “is rolling over in her grave” in embarrassment.

Comedian Dave Chappelle chose a different approach. He made it clear that he doesn’t agree with West so far as his political views go, but he did so without mocking or denigrating the rapper-clothing designer.

"I’m not mad at Kanye," said Chappelle. "That’s my brother — I love him, I support him. But, you know, I don’t have to agree with everything that he says. I just trust him as a person of intent."

Another person who came to his defense was rapper Azealia Banks. She said in a series of posts on her Instagram story Friday that she was "proud of Kanye for at least taking a first tstep in opening the dialogue."

"Literally no other black celebrity has gone to the White House with a level head to try and represent for us," said Banks.

She’s made it apparent that she isn’t a fan of Trump, but she praised West “for doing what everyone else is afraid to do."

"It's very likely that Donald Trump will be re-elected for a second term,” said Banks. "Rather than stand on the sidelines and shout and scream at him, chastise him and seek to blame him for the entirety of American history someone needs to have the courage to at least try and make something happen."

People can actually agree to disagree without attacking each other. Go figure.