It’s happened, folks. I wondered how long it would take, because I’m not an apologist for my opinions. I’ve essentially been temporarily banned from Twitter, pending an appeal. Everything you’re going to read here is complete honesty.

Why was I at the very least suspended, pending an appeal? Here's the whole story.

Anti-Trump “resister,” and all-around jerk, Keith Olbermann tweeted on Tuesday about a hunter who shot a rare turkey during turkey hunting season. 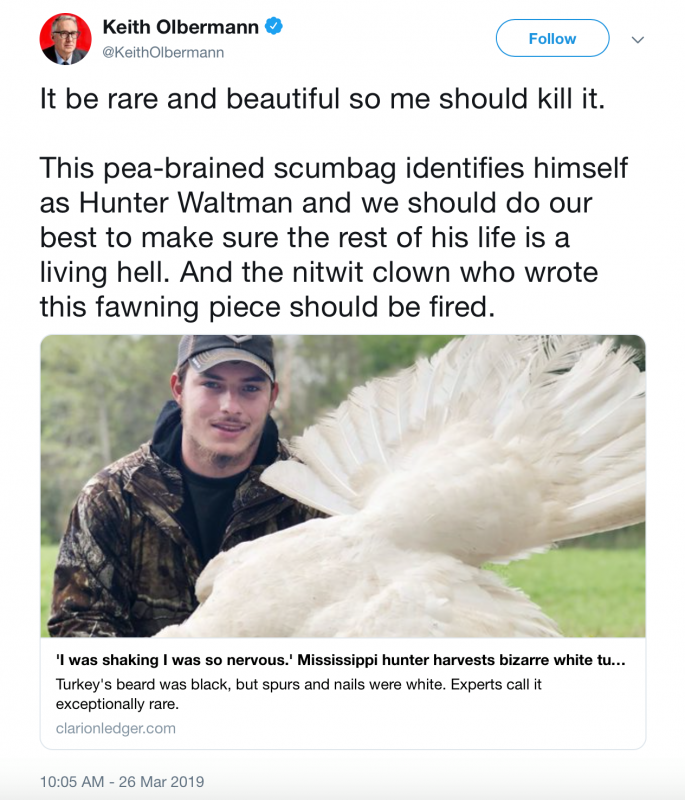 Olbermann deleted the tweet, not because Twitter took any action against him — because they don’t go after violent leftists — but because Olbermann’s employer, ESPN, gave him a stern talking to, according to the Daily Wire.

Olbermann subsequently apologized, and that’s when I had a bigger problem with him.

I am an opponent of trophy hunting and remain so, but nobody should feel threatened. This was anything but my intent, so I unreservedly apologize to Mr. Waltman for this tweet.

Notice how this coward only apologized to Waltman, but not to Mississippi Clarion-Ledger journalist Brian Bloom.  I have nothing wrong with his apology to Waltman, though. It’s his right to do so - even though he cowardly tried to hide his apology in between dozens of posts about rescue dogs. My problem comes in when his apology followed him deleting the original tweet.

OWN IT, KEITH! It’s all well and good to apologize, but when you delete the reason you’re apologetic, all you’re doing is trying to hide the uniformed smack talker that you are.

So what got me suspended, at least for now?

Here’s my tweet that I WILL NOT DELETE, NOR APOLOGIZE FOR: 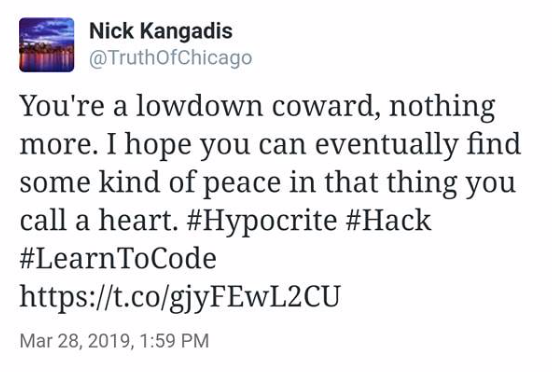 Some of you might say, and correctly so, that Twitter did say that they would take action against people who tweet #LearnToCode and not those who threaten to ruin the lives of turkey hunters.

But what about these tweets?

Sure. Be Proud. Just don’t expect anyone to believe or trust you anymore. And please, don’t #LearnToCode. We wouldn’t trust your contributions there either.

This tweet is still up. Hey @Twitter @jack @TwitterSupport, in what universe is #LearnToCode targeted harassment but this isn't? Threatening violence to a minor? Really? Is it because of the blue checkmark, or because the minor has a MAGA hat on? https://t.co/QcscrNEnAs

Seems fairly certain that after two years of gaslighting Americans and dividing the country, the majority of the MSM needs to move on and #LearnToCode

Now that the Russia hoax investigation is over, lots of folks in the media better #LearnToCode.

All of these were posted days before mine, yet they still exist — as of right now. I don't want any of those people to get suspended or banned, but Twitter's vague standards don't seem to fit any possible reason they took action against me. 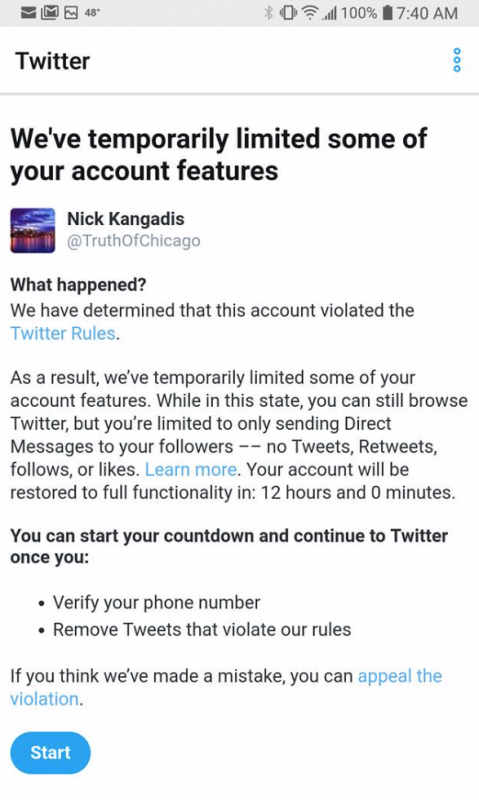 In error, I clicked the “Start” button thinking it was the appeals process. Instead, it was the process to start my suspension countdown. I verified my phone number, but I realized it was an acknowledgement of wrongdoing on my part when the following page only directs me to “remove” my tweet. 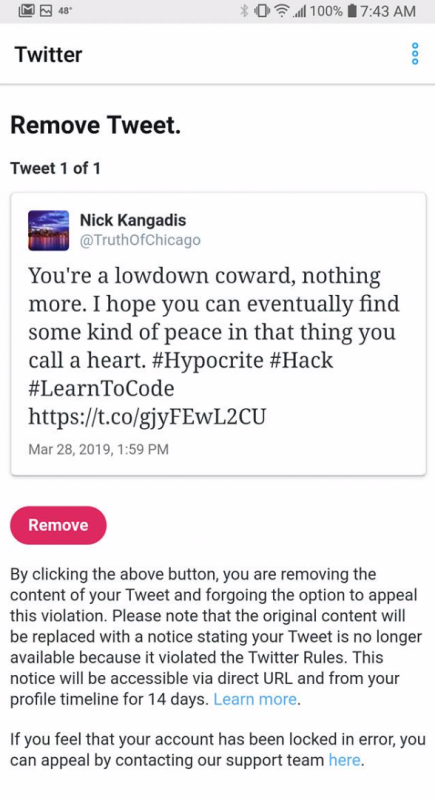 Since verifying my phone number, the only page I can see on Twitter is the page to remove my tweet. 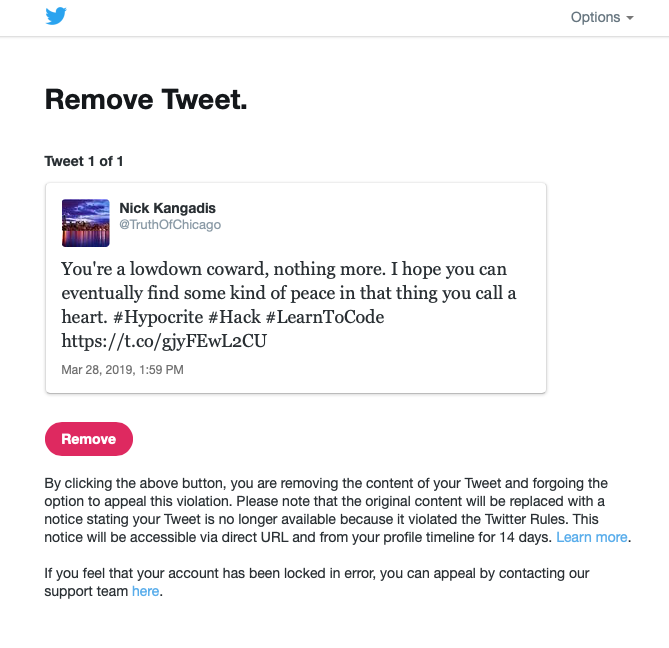 Again, I’m NOT going to do that.

Instead, I have appealed my “limited” suspension and wrote the following to plead my case with Twitter:

I was given no details as to why my account was suspended, but I refuse to delete the tweet. I did NOT threaten Mr. Olbermann. I simply gave my opinion on how vile I thought he was for threatening a turkey hunter who shot a turkey during turkey hunting season. He deleted his initial tweet and gave an apology, but I won't give him a pass. Again, I did NOT threaten Mr. Olbermann or call for action against Mr. Olbermann. This action by your organization against me will be noted. Thank you for your appeal consideration.

I think I was more than fair, don’t you?

Folks, if I’ve said it once, I’ve said it a million times: Stop apologizing for things that don’t merit an apology. By doing that, you give the delicately sensitive activists of Silicon Valley the ammunition to continue doing this to others.

The best way to tell them how you really feel? Leave Twitter, or if you prefer, #LeaveTwitter.

And for those of you who would like to see how consistently wrong Olbermann is, watch below. Enjoy!