Last week, the anti-gun movement launched by (a relatively few) Parkland school shooting survivors was a super-awesome grassroots challenge to right-wing gun nuts who think the Bill of Rights is somehow still relevant, and everyone should get on board this sweeping new wave of justice because IT. IS. ON.

Today, that movement is now also inherently racist, because it ignores the plight of black people.

Nothing to see here, folks – just further proof that if simply left to their own devices, progressives will eventually eat their own.

The Women’s March, whose profane, pussyhat-wearing brigade of banshees has inexplicably become the measuring stick for far-left activism in America, promoted a piece by Vox Monday labeling this latest anti-gun movement as proof of systemic racism because it focuses too much on the dead bodies of white shooting victims, while ignoring social justice movements for black kids. 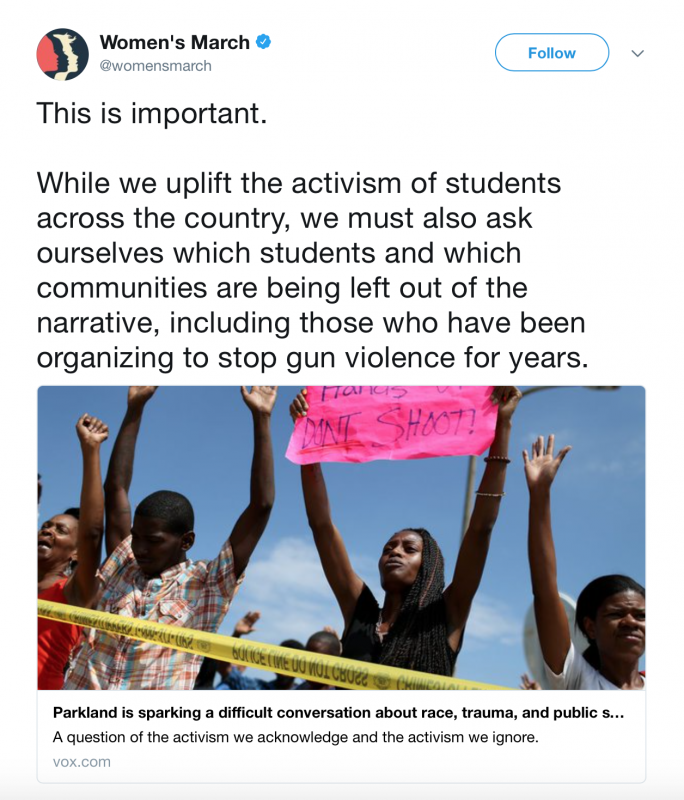 “For some black racial justice activists, organizers, and public figures, the reaction to the students of Stoneman Douglas has also led to another truth: Organizing around Black Lives Matter and the larger Movement for Black Lives, another youth-led movement demanding policy change in the wake of trauma, was not and has not been as readily embraced,” Vox argues.

Here are just a few Black Lives Matter advocates who’re ticked that the Parkland movement has gotten so much positive attention from the “justice-loving” left:

Gosh. This is amazing. And a I'm not being sarcastic. I have to be honest and say that I'm a bit taken aback (and a bit hurt) that those of us who were in the streets in the past five years for Black lives didn't receive this type of reception or public support. https://t.co/HLYXTcVdfL

We it’s clear - the things BYP, Dream Defenders, Million Hoodies and such were & are fighting for aren’t seen as “valuable” or “worthy” of support.

I remember another time when students transformed grief into action by demanding change from FL lawmakers when they were devastated by senseless killing of their unarmed peers. @Dreamdefenders rarely received national media attn & support but they laid the groundwork. Thank you.

“Young black people have been fighting to save lives through gun reform laws for years without the support and energy given to the Stoneman Douglas students. In fact, black youth, who’ve been passionately advocating for gun control measures, have been demonized, obfuscated, and overlooked, Lincoln Anthony Blades wrote for Teen Vogue.

Of course, an argument could be made for the fact that Parkland students, as obnoxious as some have been, didn't immediately go out and burn down their local 7-11 in response to their tragedy, earning themselves a slightly more positive response from the general public. Just a thought.

This certainly isn't the first time the left has targeted their own for not being "woke" enough. Actress and feminist activist Rose McGowan recently got into a screaming match with a transgender person in a Barnes & Noble over who cares about women the most. Far-left actor Mark Ruffalo, who's about as über-progressive as they come, was once publicly castigated for giving the role of a transgender character to an openly gay actor who -- gasp -- wasn't trans.

At this point, I’m not sure whether to cry at the sheer stupidity of everything, or laugh my head off at the left’s near-total inability to satisfy even their own aimless calls for “justice” and “equality,” whose ever-changing social definitions are about as slippery as the liberals’ plan for getting there.

On the one hand, progressives are supposedly the most enlightened among us, firing on social awareness cylinders the rest of us Bible-toting, Constitution-loving backwards plebes can’t hope to grasp.

On the other, they’re so busy falling all over themselves in praise for a few teenage gun control advocates that they inadvertently ignore their own equality standards and wind up getting called racist by their peers for their efforts.

It seems that among progressives in 2018 America, even the most ardent, freedom-hating, Trump-bashing leftist can’t win for losing.