Without Information, Many Dems Use Synagogue Shooting to Clamor for More Gun Restrictions

As if on cue, ready with scripted and pre-packaged (which, undoubtedly, many were) statements, numerous federal-level Democrats’ have called for further federal-level gun restrictions mere hours after the murders of eleven people at a Pittsburg, PA, synagogue.

Seriously. Just half a day after the event, and without a shred of information as to whether any existing gun statutes were broken by alleged killer Robert Bowers, at least four prominent gun-grabbers decided to get ahead of the unconstitutional “gun law” game, and call for even more infringements of the right to keep and bear arms.

As Peter Hasson writes for The Daily Caller, that stylishly notorious hater of the right to keep and bear arms, and laughingly notorious purveyor of misstatements about his “service” in Vietnam (he never went), Connecticut Senator Richard Blumenthal took time away from trying to convince people about his heroism to Tweet this, mere hours after the PA attack:

Congress is complicit—by its inaction—in this loathsome epidemic of gun violence.

First, Richard, there is no “epidemic of gun violence” -- on any level. 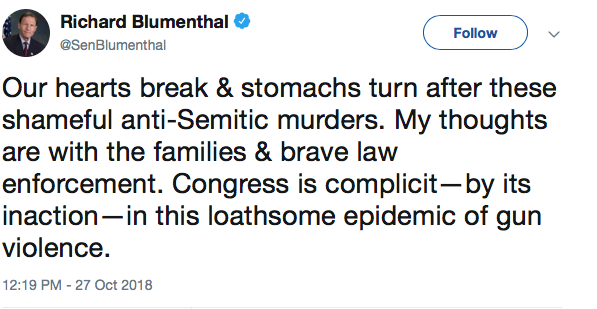 Even if one were to consider the medical term “epidemic” applicable to violence perpetrated with firearms, gun violence is at a remarkable low, despite huge increases in gun ownership.

And, Richard, an epidemic is “epi-demos” (from the Latin, “upon-man”). It pertains to diseases and maladies that are spread naturally, a-la viruses, without people willingly taking any action. Hence, it’s not possible for gun violence to be an epidemic unless there were some pathogen that spread from human to human and inspired them to kill others.

Even political power, which is the tool employed to kill the most people in human history, is not something that is spread from some naturally borne disease, Richard. Politicians, their supporters, and agents of the state bear the guilt, not “an epidemic” that flooded over people with some kind of supernatural power.

Which is why the Second Amendment was written, to try to prevent blowhards like you from stopping people from defending themselves against attacks by the government, Richard.

Not to be outdone in the “speak-before-thinking-before-learning” department, Hawaii Democrat Sen. Brian Schatz offered this timeless, grammatically sloppy, gem:

I don’t want to arm synagogues and churches and schools. I want to live in a society where Nazism and white supremacy crawls back in a hole and we have universal background checks.

Considering the fact that the Nazis, aka the National Socialists (with whom Mr. Schatz shares many of the same economic agendas) instituted gun seizures in Germany and in nations the Third Reich invaded, and considering the fact that the only way Jews in the Warsaw Ghetto survived was by using the firearms that they hid from the government, or those they procured on the black market, Senator Schatz might want to reconsider his ill-formed utterance.

Then there’s Florida Democrat Senator Bill Nelson, who took time out of flashing that glorious smile to Tweet:

Every time this happens, we’re shocked – and say it mustn’t happen again. When will opponents of common-sense gun safety work with us? We need to get assault weapons off the streets and out of the hands of those who would do us harm.

Remember, it’s totally fine for agents of the state to invade your inherent right to self-defense, as long as the politicians said it was done with “common sense”.

Collectivists often hide behind comfy rhetoric as they attack your individual rights. And, of course, they overlook the fact that their extant statutes have failed. The Guardian notes that Bowers is being charged with multiple firearms offenses, in addition to the murders.

Not to be excluded from the cacophonous chorus, the ever-classy paragon of virtue, Democrat Senator from New Jersey, Bob Menendez, Tweeted this:

The President’s callous comments show us why we need reasonable gun safety measures in our country. Instead, the President is again dismissing common sense gun laws in favor of *more* guns – this time in our houses of worship.

Which, again, makes one note how politicians consistently employ the term “reasonable” in both rhetoric and statute to give the state as much room and power as they want. And it makes one wonder what Menendez would have said to Jews about their houses of worship in Germany or Poland.

The long train of ignorance and abuse didn’t stop with his ill-advised expostulation, for Democrat Senator Chris Coons Tweeted:

We need more than thoughts and prayers-we need action to stop these senseless deaths from gun violence.

Which begs the question:

If the statutes forbidding murder were insufficient to stop a man from committing multiple murders (also known as “gun violence”), what would?

Statistically, the best deterrent is the presence of more armed people in a target area. As John Lott has shown, criminals steer clear of places they believe might contain armed civilians.

But don’t worry. The politicians will protect you. Trust them. Listen to the pop media blame social platforms like Gab, where Bowers evidently posted anti-Semitic rants. Applaud PayPal stopping payments to Gab, which is merely a place for free speech, and which, by allowing the guy’s posts to be shown, was actually doing a favor to law enforcement… Blame everyone but the killer.

And attack the rights of others.

The pattern is always the same. And this time, it’s even more despicable, because the people spouting this nonsense haven’t even had time to get all the facts before they attempt to further cut into the Second Amendment.

The lesson: Never trust the state to protect you or your rights.