Then West released a song defending his support for Trump: "I know Obama was Heaven sent, but ever since Trump won, it proved that I could be president," West raps in "Ye vs the People." He goes on: "Make America Great Again had a negative reception. I took it, wore it, rocked it gave it a new direction. Added empathy, care and love and affection, and y'all simply questionin' my methods."

Two celebrities who aren't thrilled with the new Kanye are Samuel L. Jackson and Chris Evans. Jackson appears in the new Marvel film "Avengers: Infinity War," as does Evans, who plays Captain America.

First a note of explanation. In the 2017 film "Get Out," a white supremacist hypnotizes black people and sends them to "the Sunken Place," a mental prison from which there's no escape. The film's director, Jordan Peele, explained that the Sunken Place is a symbol of black oppression. "The Sunken Place means we're margianalized," he tweeted. "No matter how hard we scream, the system silences us."

Kanye's critics have taken to accussing the rapper of being trapped in the Sunken Place - and liking it. West responded by tweeting out a picture taken inside his high-priced home and asking, "Do this look like the sunken place?"

On April 25 Samuel L Jackson tweeted: "So, they’re streaming music in The Sunken Place?? That’s got Be where the audience @kanyewest is courting is gonna buy that new release!#shallwesavehim#hedon’twannabesaved". 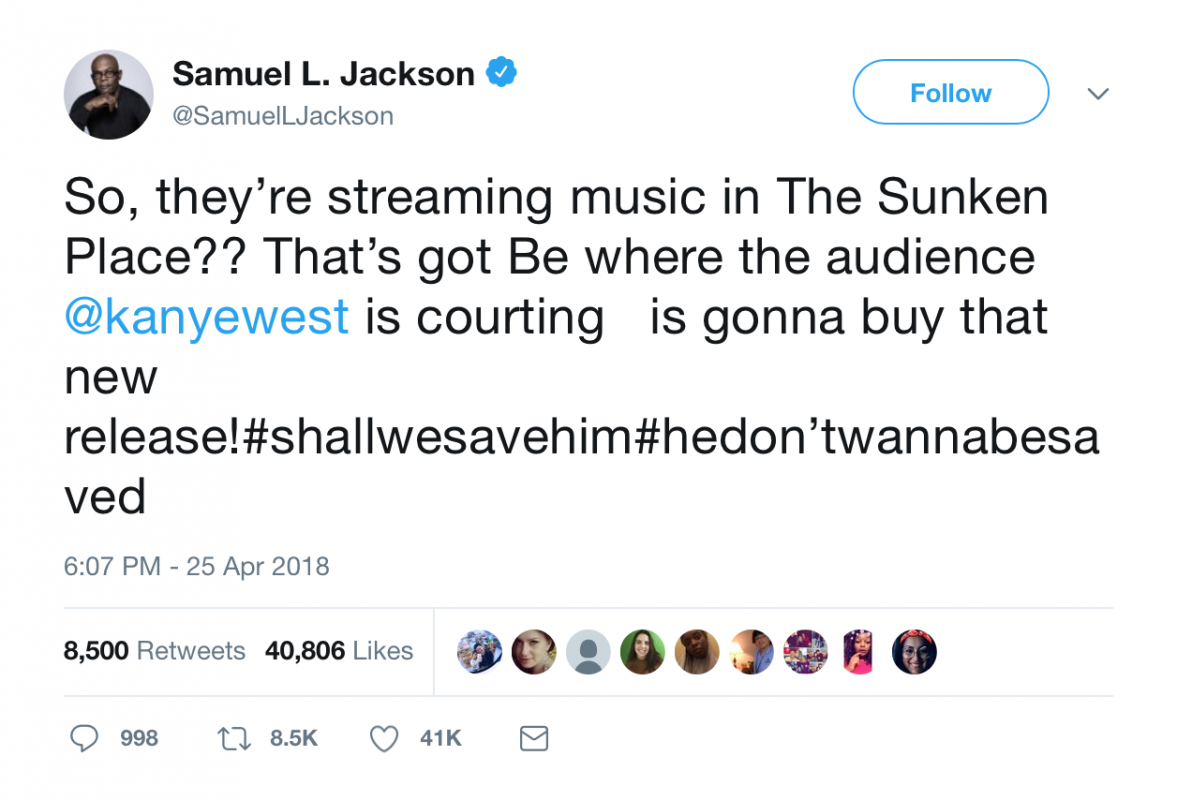 Jackson's tweet was retweeted by Chris Evans, Captain America himself.

Evans often uses social media to push left-wing causes."I feel rage," Evans said in a 2016 interview about the election. "I feel fury. It's unbelievable. People were just so desperate to hear someone say that someone is to blame. They were just so happy to hear that someone was angry. Hear someone say that Washington sucks. They just want something new without actually understanding. I mean, guys like Steve Bannon — Steve Bannon! — this man has no place in politics."