Paul to Blitzer: 'An Abortion All the Way Up to the Day of Birth' is the Democrat Party Position 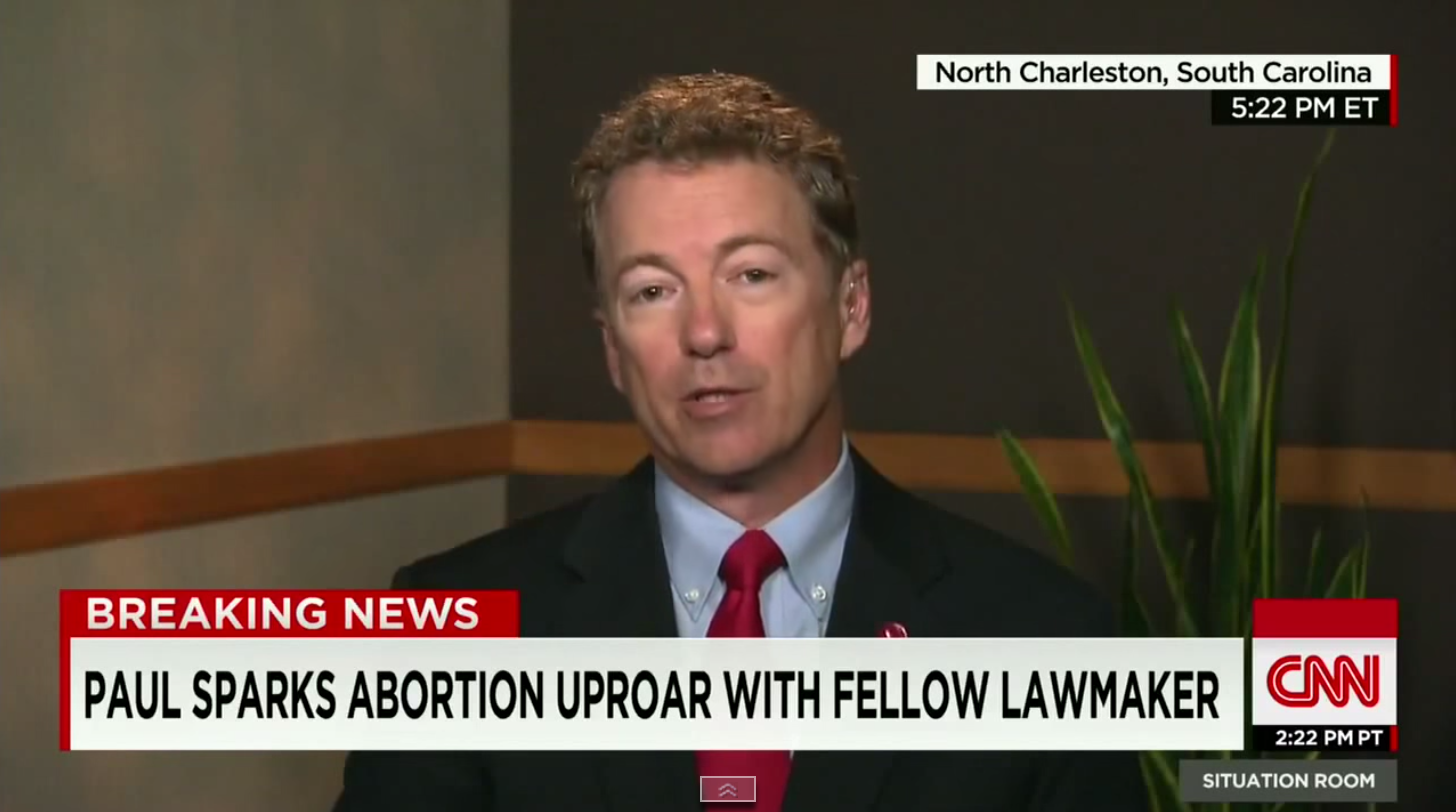 CNN’s Wolf Blitzer decided to carry the DNC’s water last night, and challenge newly-announced Republican presidential candidate Sen. Rand Paul (R-Ky.) to delineate exemptions for abortion after an epic battle of moves and counter-moves between the media and Paul on the issue. But Paul wasn’t taking the bait.

As we reported yesterday, earlier in the day, the AP asked Paul about abortion exemptions, and he gave a 5 minute response, of which they published only 2 minutes.

Then a reporter asked the same question at another location, and Paul responded with his own challenge: ask DNC Chairwoman Debbie Wasserman Schultz (D-Fl.) "Is it okay to kill a 7-Pound Baby in the uterus?"

She responded: "I support letting women and their doctors make this decision without government getting involved. Period. End of story" and added her own challenge: "Do you stand by your opposition to any exceptions, even when it comes to rape, incest, or life of the mother?"

In his interview that night, Blitzer asked Paul to respond to Wasserman Schultz's answer.

“Well it sounds like her answer is yes, that she’s ok with killing a 7-pound baby," said Paul. "But the interesting thing is, I understand our country is polarized on the issue and not everyone agrees on the issue; but even most of my friends who are pro-choice will tell me, they’re not ok with 7 or 8 or 9-pound abortions. They’re not ok with end-stage when the baby is fully developed… But Debbie’s position, which I guess is the Democrat party position, that an abortion all the way up to the day of birth would be fine, I think even most pro-choice people would be a little uncomfortable with that. So I don’t know. I really think she has some explaining to do, and if that’s the position of the party, a lot of pro-choice people are going to be uncomfortable with her position…”

“Oh, alright,” interrupted Blitzer, clearly unhappy with the direction that Paul was taking things. “Well I want you to explain your position, because typically libertarians believe the government shouldn’t be involved in making these kinds of personal decisions for individuals. So when should a woman have a right to have an abortion?”

“There is a role for government in our lives, and the role is basically to prevent violence,” responded Paul. “So when a baby is born, you know I’m a physician, and so I examine babies in neonatal nursery often. Sometimes these babies are one and two pounds, they can fit in the palm of my hand.”

“Everyone agrees that baby, that I examine has rights, that no one can injure that baby, and the government has a role to come, even into the household – if a mother or a dad or a relative is somehow injuring a baby that the baby has rights. Somehow we have to decide when a baby gets right.”

“So a one-pound baby has rights, but a 7-pound baby in the uterus still, getting ready to be born, or a 9 pound baby, would have no rights.

“It seems to be an abrupt diminution of rights that all of a sudden you have rights and a couple of minutes you didn’t have rights… That’s a question of when does life begin.

“I personally believe that life is special. That human life is special, that there’s a sanctity to life, that we are more than just clay and dirt,” said Paul. “I think there’s something special about human life….”

Blitzer, uncomfortable with the Paul’s philosophical direction, interrupted with the favorite media line: “Well what about rape… rape… rape… and incest?”

Paul answered that he’s supported legislation with and without exemptions.

“My point of view has been anything that puts forwards and develops that there is something special about human life and there’s a role for government, I’ve supported,” Paul concluded.

It only took one day for the media to lay down the abortion gauntlet for Republican candidates.

In January, the Republican party abandoned the fight over abortion when they declined to pass legislation that would ban late-term abortions. The vast majority of Americans, and women, support this legislation. The vast majority of Americans (66%) think "fetuses in the womb" are people, and only 16% think they’re not people, according to a new YouGov poll.

Paul, on the first day of his presidential run, proved he’s willing and able to fight and make the Democrats defend their extreme anti-life positions.