Editor's Note: This article originally claimed that Phil Valentine received a vaccination after contracting Covid-19. However, there's no evidence that he did. We regret the error.

Death is supposed to respectfully bring people together to honor someone’s memory – even if they were political opponents. Not so, though, with tennis legend Martina Navratilova, who did a social media happy dance over the COVID-19 death of conservative Tennessee talk show host Phil Valentine, a vaccination skeptic. It seems this lefty is not at all concerned about COVID-19 deaths when it comes to conservatives with reservations about vaccines.

After being hospitalized with COVID-19, Valentine reversed his position on vaccination. However, he died Saturday. Navratilova disgustingly rejoiced at news of his passing. She tweeted Valentine messages that had nothing to do with love, starting with this one.:

“WOMP WOMP … no mercy from me for this guy”

Navratilova wrote this in response to another person mentioning Valentine’s death and posting lyrics from a John Lennon song talked about how “instant karma’s gonna get you.” And you better get yourself together because soon you’ll be dead. 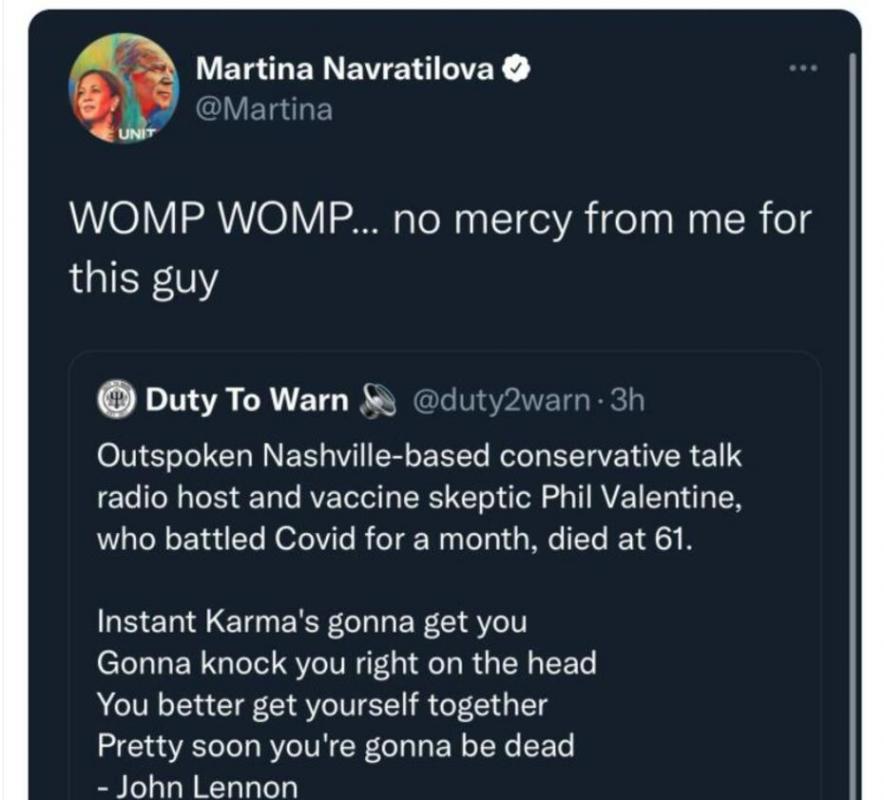 The Business & Politics blog described Navratilova’s actions as one of “the ghoulish celebrations" of the death of Valentine, “who was skeptical about the vaccines that are being relentlessly pushed by the Biden administration and their media shills.”

Twitter messages criticized Navratilova and told her there is something wrong with her soul and urged her to stay classy. She merely responded that she is classy. She tweeted again, saying:

“WOMP WOMP as in too bad- this guy laughed about people dying and I am supposed to be sad? Nope”

Later she tweeted: “This man directly and indirectly killed people. Not ok.”

Related: Pelosi: ‘I Had To Get A Mandate Because I Ate Too Much Fudge Chocolate Ice Cream’

Business & Politics disputed the claim that Valentine had mocked people who died of COVID-19 and that he contributed to anyone’s death. I would also add that there is no guarantee an earlier vaccination would have prevented Valentine's death.

“Homosexuals or drug addicts don’t kill anyone else with their behavior or platform. This guy parodied a disease which killed hundreds of thousands of Americans. With power comes responsibility- this man had none.”

However, 77 percent of the Americans with HIV are homosexual. Sounds like some serious super spreading going on here.

Later Navratilova tried to walk back her harsh rhetoric:

“In case I sounded too harsh or cruel let me rephrase my earlier tweet- I am not celebrating this man’s passing. But neither am I mourning his passing. He made parody of a disease that has devastated our world and our country- enough said…”

As a cancer survivor, Navratilova certainly isn’t showing much compassion for others at risk of death because of a serious disease. Her Twitter opponents wore her down and she eventually deleted the nasty Tweet about Valentine. She was unable to delete the ill will she had unashamedly spread.