Milo at Berkeley: the Media Tell One Story, But the Truth Tells Another

There’s the truth, and then there’s how the media spins things in order to win the war for people’s minds.

Right-wing firebrand Milo Yiannopoulos showed up at the University of California-Berkeley to meet with disappointed students after the university essentially intimidated sponsors of the planned “Free Speech Week” into pulling their support and effectively cancelling the event.

Yiannopoulos decided to go to Berkeley anyway. However, the media took the appearance as a waste of university funds, considering the amount of money it took for Berkeley to provide security for the appearance.

Now, Yiannopoulos is claiming that the narrative being pushed by the media is distracting from what actually happened Sunday afternoon at Berkeley. A U.S. college essentially attempted to squash free speech, and it was Berkeley at the center of the controversy once again.

Here’s is proof of that narrative if you search “Milo Berkeley” on Google: 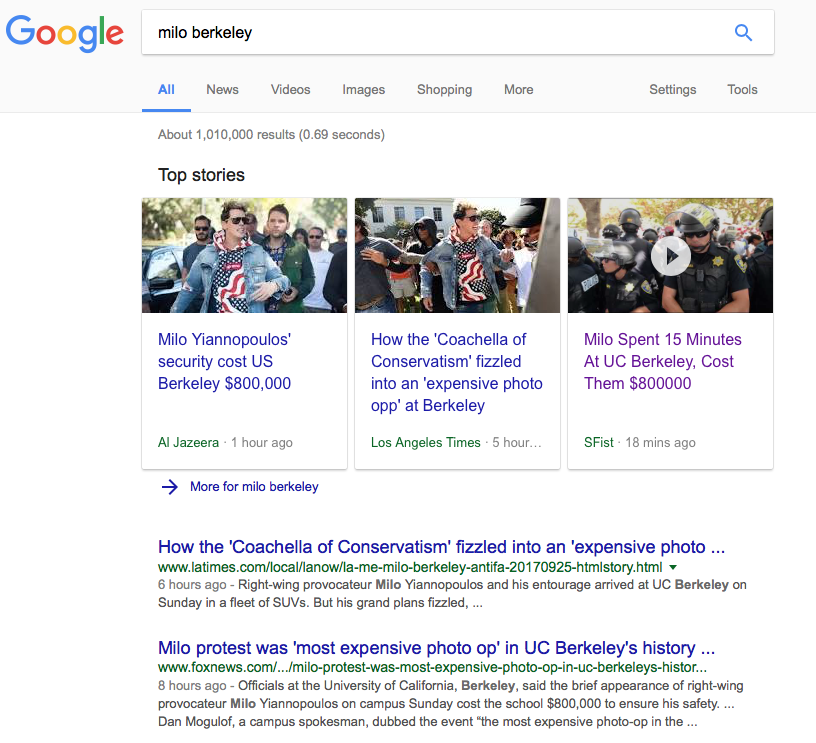 The claim is that hundreds of people showed up to see Yiannopoulos, but the university made it impossible for some people to actually attend what was supposed to be his speech.

In one of the videos, a man that attempted to attend the event commented on the blatant disregard toward free speech at Berkeley.

That is a very troubling comment coming from American youth who just want all sides to be heard.

The same man, possibly a student at UC-Berkeley, claimed that “Antifa forced Milo to evacuate for his own safety and prevented anyone from hearing him.”

Go figure! The radical fascists of Antifa shut down yet another speech, because their delicate sensibilities couldn’t handle a British gay man voicing his opinion.

A woman attempting to go to the event made allegations against the media for their deliberate spin on the event.

Here’s what the woman said:

After they let about 50 of us in, they stopped letting us in, because the media had a [drone] filming this small crowd. What they didn’t film was the thousands of people out here waiting to get in. They filmed only the small hub of us in there to make it look as though it was a failure. It was not a failure. Not at all.

This shouldn’t be all that surprising considering the media have taken it pretty easy on Antifa.

Just for laughs, here's a picture of Refuse Fascism organizer and Antifa member Sunsara Taylor being arrested on Sunday: 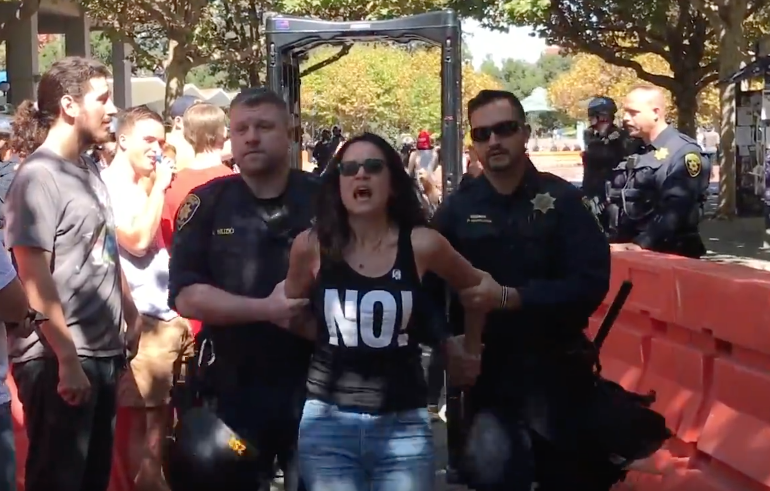 Taylor could be heard yelling, "We refuse to accept a fascist America!"

If you want to fight fascism, you shouldn't be a fascist yourself.

One person claiming to be a transgender individual said that because they were wearing an American flag, a “Team Milo” shirt and a “Make America Great Again” hat Antifa allegedly surround them and called them a “Nazi.”

“They are doing everything that they’re against,” the person said. “They are supposed to be in support of people like me, but yet, they are attacking people like me.”

Multiple people testified that the school kept them from entering the event because they had a bag, purse or fanny pack -- despite the fact that the school had set up a metal detector and security checkpoint lines. Apparently, free speech is more dangerous to these people than boarding an airplane.

If all of these claims against the media and UC-Berkeley are true, then there needs to be a long look taken at the university system as it pertains to voices that aren’t Far Left being prevented from being heard.