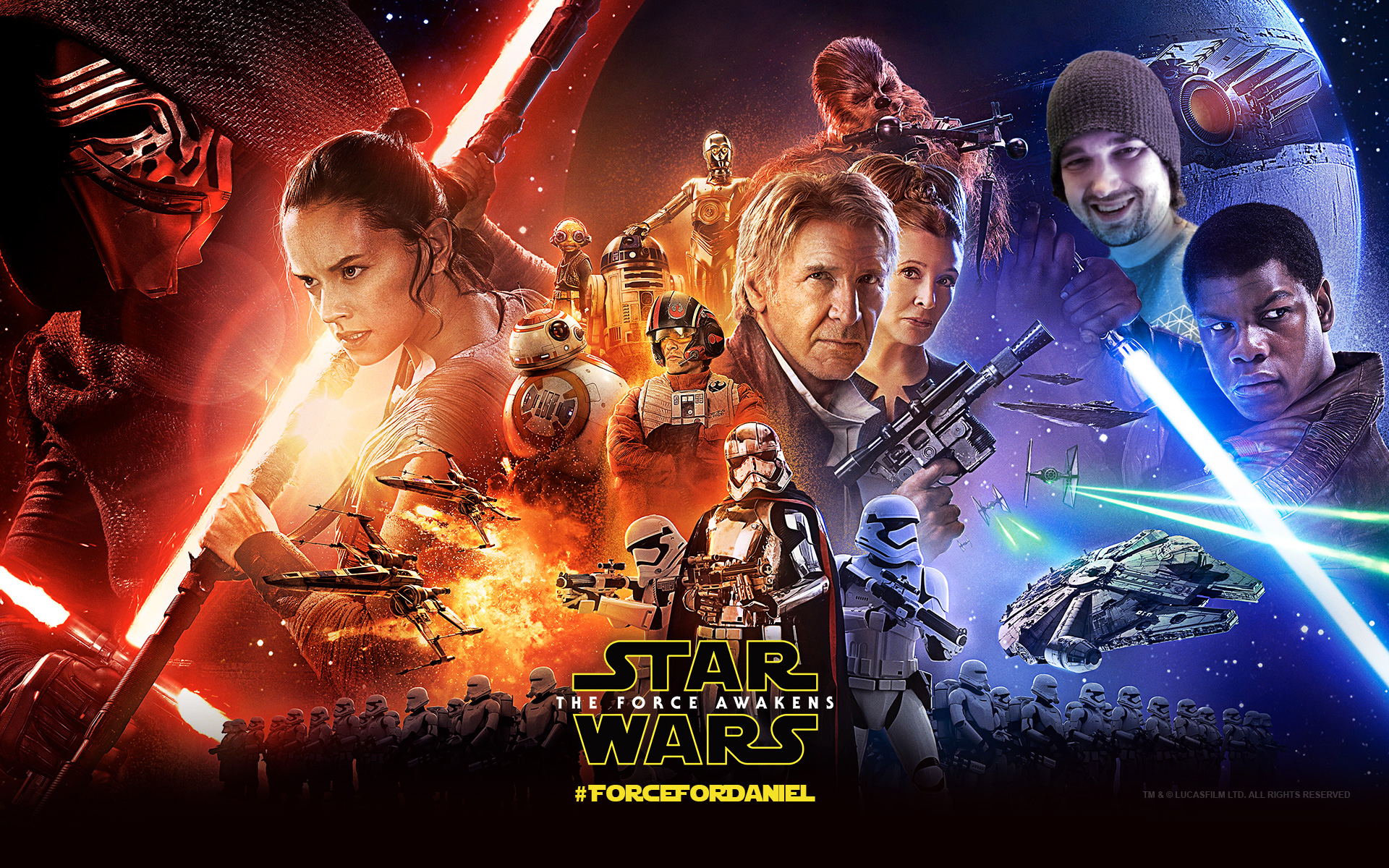 We’ve all thought about it at some point in our lives: what would your dying wish be? For one Texas hopeful, seeing the next Star Wars movie ahead of its December release is his dying wish.

Daniel Fleetwood, 32, was diagnosed with Spindle Cell Sarcoma in 2013. As of Sept. 1, 2015, he was given one to two months to live. According to a Go Fund Me page, which was set up to raise money to help pay for Fleetwood’s hospital bills, “the cancer has spread to his lungs and is inoperable.” 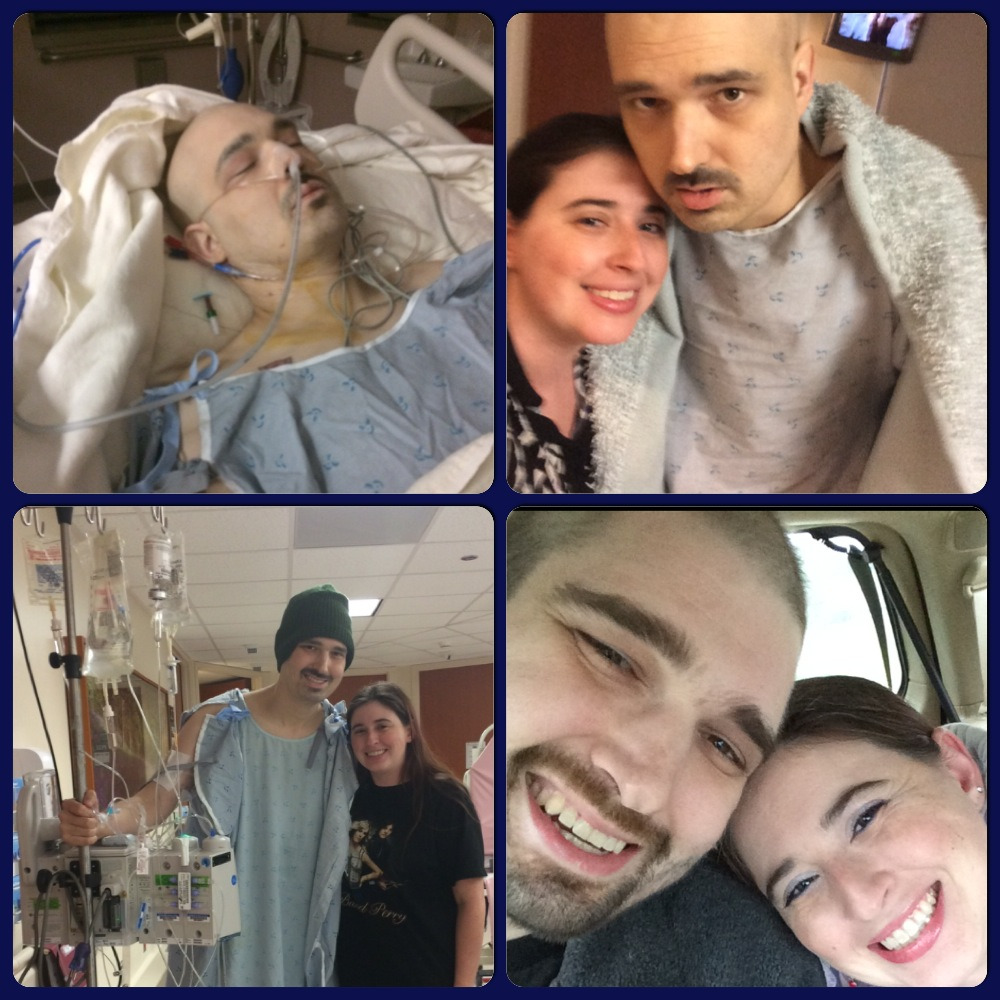 But that's where the magic begins. Daniel is a HUGE Star Wars fan, and the Twitter hashtag #ForceForDaniel was born. Since then, Daniel has been getting some love from some pretty big names attached to the film.

John Boyega, who plays one of the new characters, Finn, in the Star Wars franchise, as well as Luke Skywalker himself (Mark Hamill) both retweeted this:

Even Chewbacca (Peter Mayhew) retweeted this: 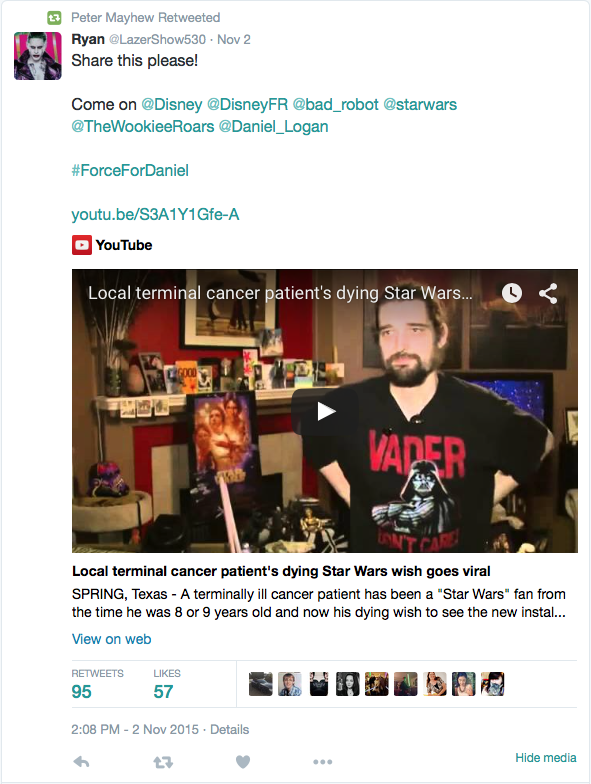 At this point, only time will tell if Fleetwood’s wish will be granted. That's in the hands of Disney and J.J. Abrams. The upside is that Abrams has done something like this before. Back in 2013, Abram let the late Daniel Craft, director of the New York Asian Film Festival and an avid Trekkie, see "Star Trek: Into Darkness" a whole five months before the film hit theaters.

"A day or so after the thread began, Paige, Dan’s wife, got a voicemail from J.J. Abrams and Damon Lindelof that was very nice and very straightforward: A producer for the movie would get in touch with them," friend Grady Hendrix wrote in a follow-up post on Reddit. "The next day, one of the film’s producers showed up at the door of their apartment with a DVD containing a very rough cut of Star Trek: Into Darkness in his hands. Paige had made popcorn, Dan had spent the previous day resting so he could sit through the movie, and after signing about 200 nondisclosure agreements, they watched the film and had a blast.”

Hopefully Fleetwood, like Craft, can have his wish granted -- and this time, it would really cool if he not only got see the film, but also got to watch it along side Finn, Luke and Chewy. Now that would be something.