Kevin Sorbo: 'Socialism/Communism is Alive and Well and Destroying America'

Actor Kevin Sorbo, star of the "Hercules" TV series and the recent film "Let There Be Light," recently took to Facebook to express his dismay that, according to an op-ed in the Washington Times, leftist indoctrination in the United States starts in grade school.

"As author William J. Federer explains," Robert Knight wrote in the Times, "animus toward their own country and free market capitalism among many younger Americans — even Christians — is no accident but the result of a conditioning process that begins in the elementary and secondary schools and goes into overdrive in universities....There is actually a socialist-communist tactic called ‘deconstruction,’ where you separate a people from their past, get them into a neutral position where they do not remember where they came from, then you can easily brainwash them into whatever future you have planned for them"

Sorbo linked to the piece then added his own take:

The brainwashing continues. Great article and just more proof that Socialism/communism is alive and well and destroying America. That form of government has never worked and also been responsible for the deaths of 100 million people over the last century. Are people swimming from Key West to Cuba? Are Americans flooding the borders to get into Mexico? There are reasons people still want to come to America more than any other country. I love how the Left still throws out the Nazi label when talking about Conservatives. Nazi stands for National Socialists....so who are the Nazi's here??

America became great because of individuals and the Capitalist system. The American dream was born from that. It's not perfect, but still the best. Big Government never works. Just controls and destroys hope, esteem, drive, motivation, dreams and on and on...... 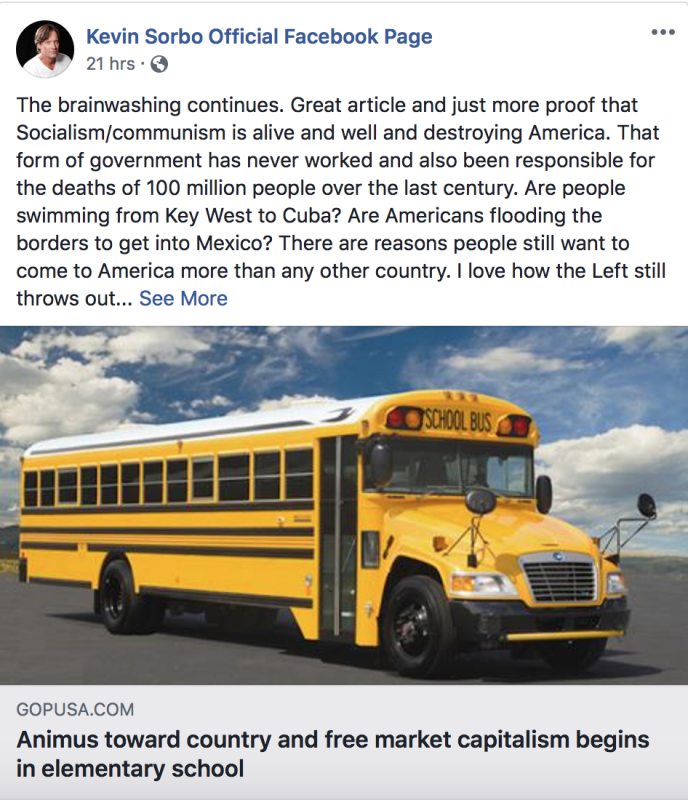