GoFundMe For Peter Strzok Reaches $250K In Under 24 Hours

What do you do when you get caught being politically biased in your government intelligence job and are subsequently fired? Double-down and ask for money, of course!

Former FBI agent Peter Strzok, who was fired from the agency on Monday, apparently set up a Twitter account and posted a link to a GoFundMe page that is listed as being set up by “Friends of Special Agent Peter Strzok.”

The fundraising page notes that the proceeds will go to cover Strzok’s legal costs and “lost income” as a result of his termination from the FBI.

“All funds raised on this GoFundMe will be put into a trust dedicated to covering Pete’s hefty – and growing – legal costs and his lost income,” the GoFundMe page stated. “The trust is being created and details about its management will be shared here as things progress.”

In terms of Strzok's Twitter page, which was opened this month, Strzok tweeted and pinned a letter from his attorneys that obviously comes to Strzok’s defense. But, the post also includes a link to the GoFundMe page set up in his name. 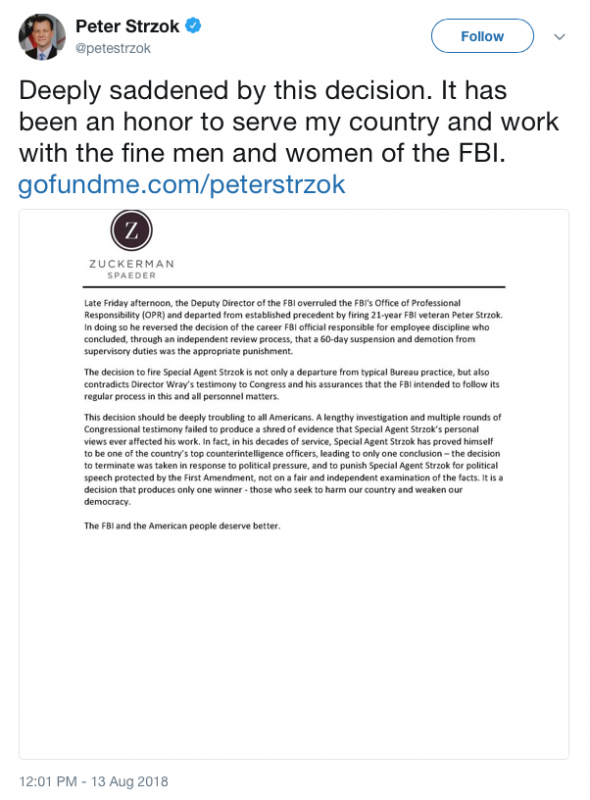 In the letter from Strzok’s attorneys, they seem to take a veiled shot at the Trump administration and lay the guilt trip for the termination of Strzok on pretty thick.

“It is a decision that produces only one winner - those who seek to harm our country and weaken our democracy,” the letter states. “The FBI and the American people deserve better.”

For the people that donated, what a waste of money. In the real world, generally no one cares if you lose your job. And, they’re certainly not setting up a GoFundMe page for you. The only reason people are donating to Strzok’s cause is because they believe he opposes Trump.

Doesn’t that kind of prove the allegations of bias as a FBI agent against then-presidential candidate Donald Trump in a way? The people donating don’t like Trump. They believe Strzok doesn’t like Trump, so they donate to his “plight.”

Perhaps the most hypocritical aspect to Strzok’s GoFundMe page is the following concerning Strzok’s financial situation:

Unlike those who typically become the focus of partisan investigations in Washington, Pete is not politically connected, he’s not a wealthy lobbyist and he’s not interested in using his notoriety for personal gain. Because of this, he doesn’t have deep pockets that allow him to pay for the significant legal bills he has incurred to defend himself and the FBI against these political attacks, or to easily cover the expenses incurred by his lost income.

You’re literally asking for money, and the only reason people are donating is because of who Strzok is. So, the claim that “he’s not interested in using his notoriety for personal gain” is absolute BS. Strzok tweeted the link to the GoFundMe page, which, as said earlier, is in part to cover “loss of income.”

That is most definitely “using his notoriety for personal gain.”

I’m not buying it, but apparently over 6,000 people have. Based on the numbers, the average donation to the Strzok GoFundMe is around $40 a person.