It’s Equal Pay Day! (Also known as every day in the United States, since paying women less than men based on their gender is illegal, but ya know – details.)

According to liberals, though, Equal Pay Day symbolizes how far into the year women must work to earn what men earned in the previous year, based on overall average income among all men and women in the U.S. This year, it’s April 10.

And it's all based on the notion that women, on average, still make a paltry 77 cents for every dollar a man makes in the United States.

So in celebration of all things equality, here are a few stubborn little facts to trigger liberals on this National Day of Gendered Outrage.

It’s true, and even the Obama administration kind of admitted it.

Lots of studies have thrown massive wrenches into this common myth, but for time's sake, we'll pick one. According to Gallup, the so-called “gender wage gap” isn’t based on gender discrimination – it’s based on things like, for example, the number of hours worked.

The analysis found that on average, most men simply work more hours than most women, leading to an obvious pay discrepancy. As I’ve already reported once before:

Women also tend to choose career fields that pay less than those chosen by men. The top three most common jobs for women, for example, are teachers, nurses and secretaries, according to the Bureau of Labor Statistics. For men, it's truck drivers, followed by managers and supervisors.

2. Even women think the gender wage gap is bunk.

Think all women buy into the gender pay gap nonsense? (Well, other than Yours Truly, of course.) Not even close. Here’s one who doesn’t. And another. And another. I could keep going all day, but you get the point.

If you’re a woman who’s getting paid less than your male coworker for doing the exact same job, with all other factors like education level and experience being the same, then congratulations! You have a lawsuit to file, because that’s already illegal.

It’s called the Equal Pay Act of 1963, and it amended the Fair Labor Standa ing discriminated against, but because they simply demand less for themselves at the hiring table.

On top of that, women tend to start out making the same as their male coworkers, but end up making less as other life factors come into play.

According to the Pew Research Center‘s analysis of Bureau of Labor Statistics data from the 1980s to 2012, women’s earnings relative to those of men began to fall around the time they reach their mid-30s, even if they had started out ahead.

Pew cites motherhood and unpaid work at home as two potential factors for the widened gap, but Hired’s research shows that women with four or more years of experience are also ask for salaries that are, on average, 5% lower than those of their male counterparts.

5. Feminists are quick to disown women who don’t buy into this bull.

If you’re a woman, you should always be encouraged to think for yourself, form your own opinions, and stand your ground.

Unless you don’t buy into the liberal line. Then, apparently, you’re an embarrassment. 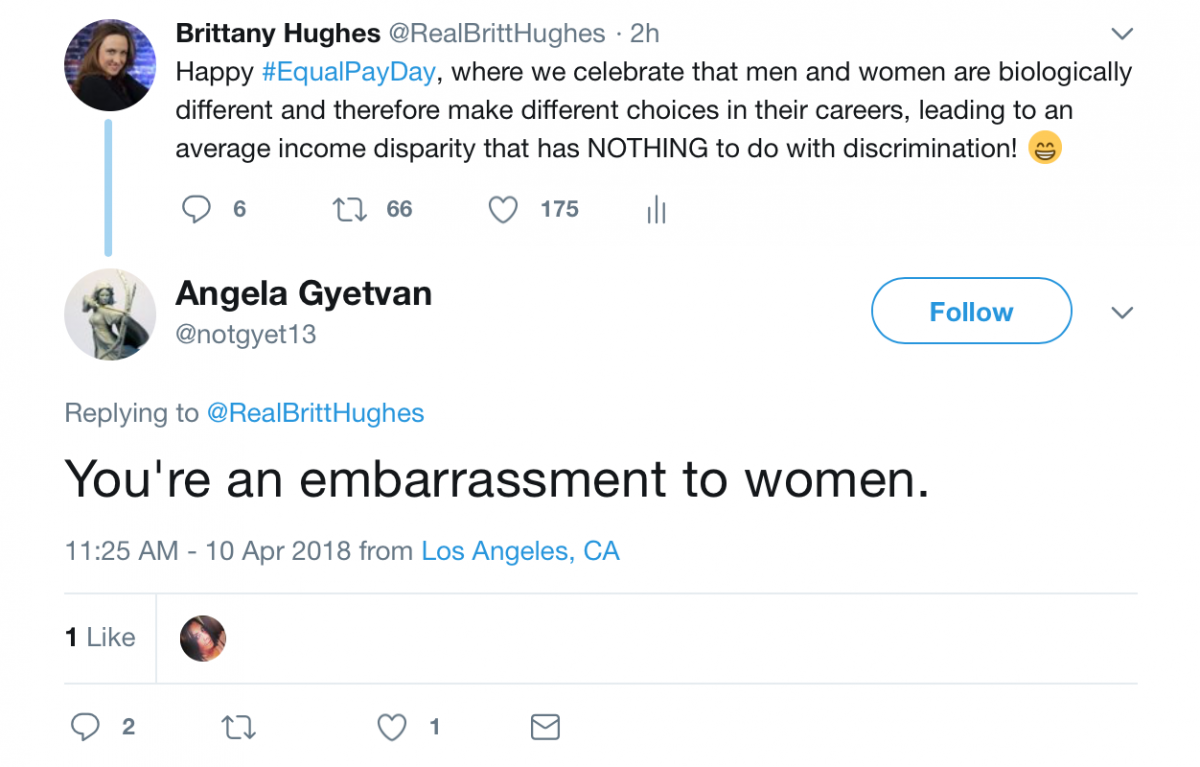 So much for sticking together.

So happy Equal Pay Day, "progressives." I'll be over here, enjoying my equality. Have fun with your victimhood.