Cruz: Democrats Will Continue to Fund Planned Parenthood Even If It ‘Gets Indicted’ 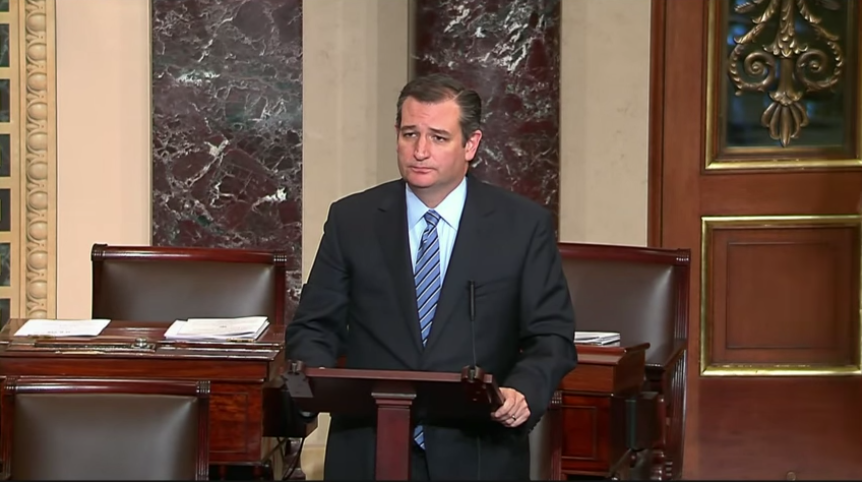 U.S. Senator Ted Cruz (R-Tex.) delivered a fiery speech on the Senate floor on Tuesday regarding the failings of Washington in surrendering to President Obama’s demands time and time again, including continuing to fund America’s largest abortion provider with taxpayer dollars.

The Republican presidential candidate argued that, even if Planned Parenthood gets indicted, Democrats will continue to fund them, as they’ve provided no indication otherwise thus far.

“I will say, Mr. President, as an aside, ordinarily when a national organization is caught on film committing a pattern of felonies, the next steps are predictable. The Department of Justice opens an investigation. The FBI shows up and seizes their records. Everything on those videos suggests those felonies are still occurring today. What does it say about the Obama Justice Department that no one on the face of the planet believes there's any chance the Justice Department would even begin to investigate Planned Parenthood? What does it say about the most lawless, partisan Department of Justice that you've got this group, hey, it's a political ally of the president so that's apparently all that matters. If it's an ally of the president, it doesn't matter that they're videotaped committing felonies. The Department of Justice will not even look at it.

“You know, I'm an alumnus of the U.S. Department of Justice. I was an associate deputy attorney general. I spent much of my adult life working in law enforcement. The Department of Justice has a long, distinguished record of remaining outside of partisan politics, of staying above the partisan fray, of being blind to party or ideology and simply enforcing the law or the Constitution. I'm sorry to say under Eric Holder and Loretta Lynch, the Department of Justice has completely besmirched that tradition. No one remotely believes that the Obama Justice Department will even begin to investigate this pattern of felonies. You don't see Democrats suggesting it. No one in the media suggests it. And, by the way, if this were a Republican Administration and the entity that admitted to a pattern of felonies was a private entity that supported Republicans, you would see on CBS, NBC, ABC an indictment clock every night. You would see the anchors saying, ‘When will this investigation open? When will they be indicted?’ Instead, the media pretends these videos don't exist.

“In the face of what appears to be a national criminal enterprise, we're faced here with a much simpler question: Will we continue to pay for it? Will we continue to pay for it? With your and my tax dollars, will we send $500 million a year to a private organization to use to fund this ongoing criminal organization? And what's the position of the Democrats? Hear no evil, see no evil. They do not care. What Democrat do you see calling for the enforcement of criminal laws against Planned Parenthood? What Democrat do you see saying, at a minimum, ‘Let's not send taxpayer money to fund this?’ Not one. Not a single Democrat stood up and said that.

“Let me ask you, Mr. President, what happens if Planned Parenthood gets indicted? Because even though the U.S. Department of Justice under President Obama has become little more than a partisan arm of the Democratic National Committee, there are state and local prosecutors that are investigating Planned Parenthood right now. If Planned Parenthood is indicted, do the Democrats maintain their wall of silence and say, ‘We're going to continue to fund them under indictment’? By all indications, yes. You haven't heard a single Democrat say, well, if they're indicted, then we'll stop.”

To listen to his full speech, check out the video below.

Planned Parenthood president Cecile Richards testified before the House Oversight Committee regarding her company’s use of taxpayer funding on Wednesday, part of an ongoing investigation regarding a series of sting videos showing her employees discussing the sale of fetal tissue and body parts.