A downtown Philadelphia Starbucks has been the center of controversy this past weekend after a Facebook post alleging that an employee of the coffee shop refused to allow a uniformed Philadelphia Police sergeant to use the restroom went viral.

The post, which does not identify the sergeant in the story, says he walked into the Starbucks at 13th and Chestnut streets and asked to use the restroom. The employee, according to the post, "State[d] in a loud voice ... that the bathroom is for paying customers only." The post goes on to say that the sergeant asked politely to use the restroom anyway, and that the Starbucks employee declined to grant access.

An officer who knows the sergeant, Officer Joe Leighthardt, was the first to share his fellow officer's post about the incident, which happened Thursday or Friday of last week. Although Leighthardt has supposedly never been to that Starbucks location as a customer, he has been there several times on calls for service.

"I didn't intend for it to go viral," Leighthardt said, adding that most people who have responded to the post have been supportive.

In reply to Leighthardt's post on Starbucks' official Facebook page, Starbucks wrote in part, "We are aware of this situation, and it is certainly not in line with the experience we want any of our customers to have in our stores. We are taking all necessary steps to ensure this doesn't happen in the future."

Starbucks also responded to the same Facebook post about the alleged incident asking for contact information for the officer involved so the company could reach out directly.

"We would like to discuss the situation with the police officer and hear from them directly about this experience," the company wrote in its comment. "If you happen to know who this was -- please have him/her send us a private message through our page with their contact info."

Leighthardt told NBC10 that he believes the sergeant has contacted Starbucks. He declined to comment when reached by NBC10. 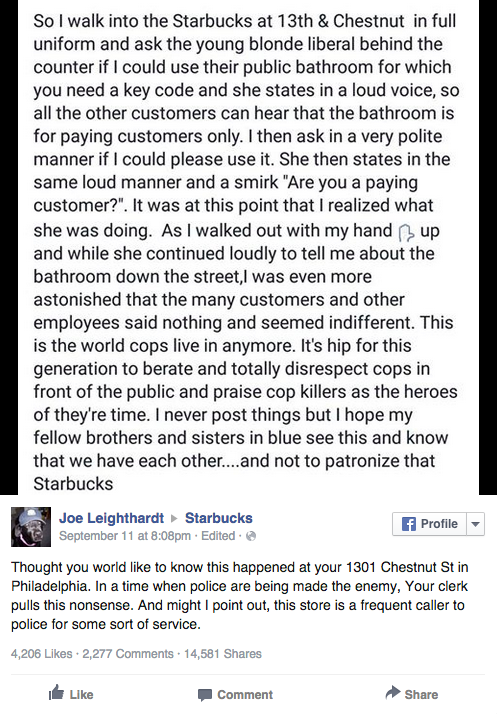