CNN: Deporting Illegal Aliens Is Exactly Like the Holocaust

Apparently, CNN thinks that deporting illegal aliens living here in open violation of our immigration laws is the same exact thing as Hitler rounding up and exterminating his own Jewish citizens because he doesn’t like their ethnicity.

CNN published an article Wednesday telling the story of an unnamed Jewish woman – whose name has been withheld to protect her from law enforcement – who is currently harboring illegal aliens in her home and pretending they’re Anne Frank. 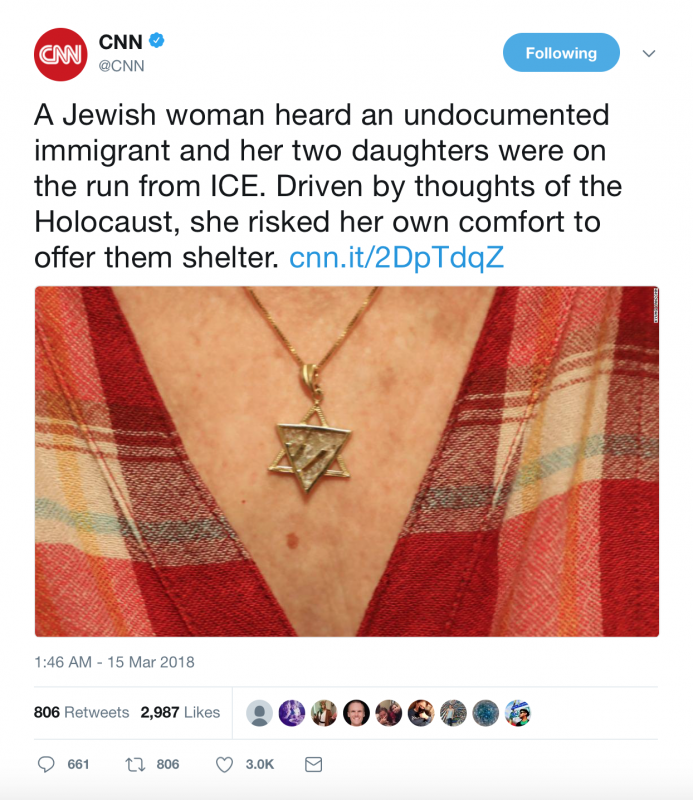 "For the woman, the link from the present to the history of World War II is strong," CNN pities.

"I grew up in the time where the Holocaust was not so far behind me," says the woman. "There was always that awareness, as a Jew, that it's possible to be kicked out of a country where people thought they were home. And many of those people didn't make it."

She says there is a strong feeling in the Jewish community. "We cannot let this happen. It's our responsibility. What was done to us cannot happen to other people."

As CNN nods along in totally unbiased sympathy, the woman explains that she’s currently housing a local illegal alien family, the father of which was deported last year. She was connected to the family by a local pastor, who’s decided to buck federal immigration authorities by helping hide illegal aliens fleeing deportation.

Because, you know, Trump is Hitler.

Of course, nowhere in it’s brazenly slanted article does CNN bother to mention the painfully obvious: that deporting illegal aliens living in open violation of our nation’s lawful immigration policies is just a little bit different than rounding up your own citizens and booting them out of the country or gassing them to death because you don’t like their ethnicity. The victims in CNN's fairytale aren't being targeted because they're thwarting Trump's plan for a master race - they're being deported because they knowingly broke the law.

Which, by the way, is a practice that also happened under Obama.

Nor does the network make any apologies whatsoever for knowingly interviewing immigration fugitives and intentionally masking their identity so they can continue to fly under the legal radar.

Then again, this is the same network that once published a list of cell phone apps to help illegal aliens escape the law, so this is pretty much par for the course.