ACLU: Donald Trump Is Spying On Us!

As a journalist whose job partly is to stay abreast of rampant stupidity, I recently made the oft-regrettable mistake of signing up for ACLU emails. This morning, I received one that reminded me for the umpteenth time just how sad and defunct this organization has come.

The email, whose subject line pointedly reads: “The Trump administration is spying on us,” suggests to readers that someone from Big Brother is listening in every time you call your spouse to ask what time they’ll be home from work. Here's a screen grab: 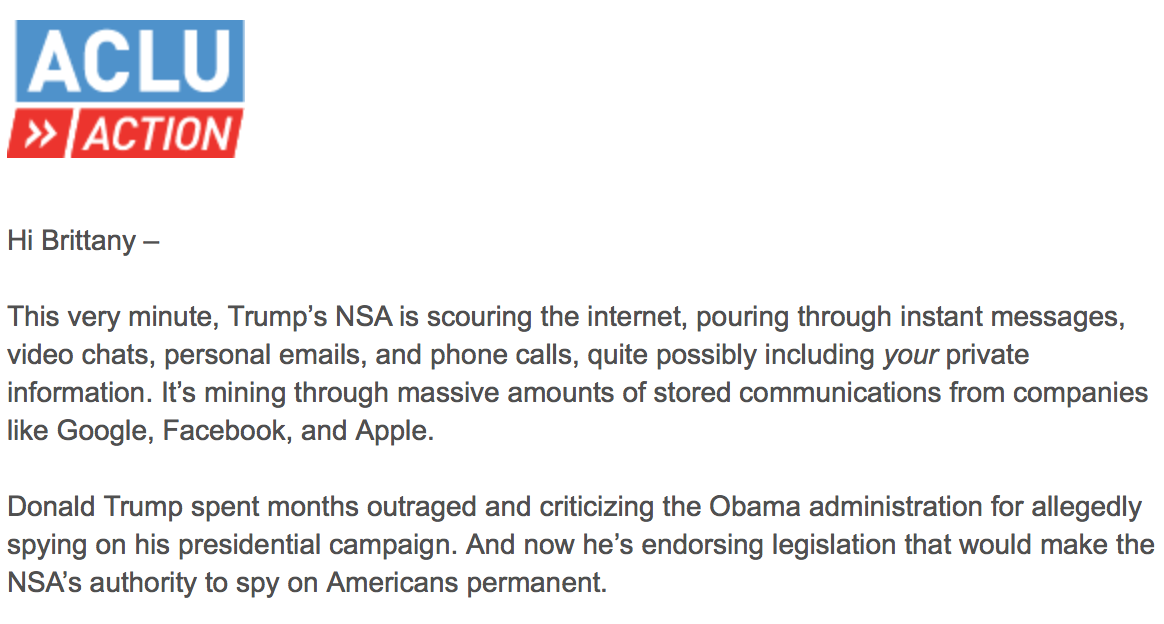 If the town criers over at the ACLU ever find themselves out of a job, Michael Bay may have some openings on his next flick.

The left-leaning law firm's over-hyped warning signal – which is less of a resounding gong, and more reminiscent of the bell Pavlov used to call salivating dogs who can’t think beyond their next meal – is based on criticisms of the Foreign Intelligence Surveillance Act (FISA). You’ve probably heard of it.

In a nutshell, this law allows intelligence officials to obtain warrants to monitor and store electronic communications between foreign operatives suspected of espionage or terrorism. At times, Americans get swept up in this surveillance without their knowing it, although their identifying information is supposedly redacted unless it is determined that the citizen is knowingly participating in, say, a deliberate act of treason or terror.

FISA critics claim the law is unconstitutional and invades the privacy of ordinary Americans without their knowledge. Proponents argue it’s a necessary method of obtaining foreign surveillance and bolstering national security, and creates negligible collateral damage. For the purposes of this article, I don’t much care on which side you fall.

It’s worth noting that this law, which has existed in some form or another since the 1970s, landed in the public spotlight early on during President George W. Bush’s first term in office, largely due to Edward Snowden. Despite the ensuing public outrage over the notion that the federal government was rifling through all our personal voicemails, the practice continued throughout the Obama administration and, now, into Trump’s – i.e., Trump didn’t start it.

As an intelligence employee once explained to me over a casual dinner conversation at a D.C. event, members of the U.S. intelligence community have far more pressing things to do with their time than pick through the grocery lists or t-ball schedules in every gmail account of every soccer mom in the country. While this may not convince you of the constitutionality of the FISA program or its lack of potential hazards (and it’s not meant to), given that there are 320 million individuals in America sending trillions of individual communications and only 24 hours in a day, it’s far from the most outlandish claim ever made.

If you’d prefer that your personal communications not be swept up in foreign surveillance efforts, might I suggest you start by not becoming pen pals with a known North Korean operative or trolling ISIS chat rooms during your lunch break.

This is not to say there aren’t plenty of ongoing debates that should be had over the balance between national security and personal privacy -- including the FISA program, which presents legitimate concerns. But the ACLU’s word picture of Donald Trump sitting in the Oval Office flipping through your personal Facebook messages about your grandmother’s chicken pot pie recipe is laughably absurd, and such exaggerated fear-mongering does little to advance honest discussions regarding constitutionality and government overreach.