Ah, liberals. If they're no use for a decent government policy, at least they're good for a laugh.

In all seriousness, it takes talent to bungle a story about heroic Americans saving one another's proverbial bacon in the aftermath of a devastating storm. Seems pretty self-explanatory, no? Yet somehow, the American Left still managed to jam its burkenstocked foot all up in its ever-yammering mouth, proving that when given the chance to exploit a tragedy, they'll put politics over people, every time.

Here were a few of my personal favorites.

1. That time they obsessed over Melania’s shoes, for literally no reason.

While millions of Texans were busy digging themselves out from behind their own toppled bookcases and swimming across their living room floors for dear life, the liberal media thought it would be apropos to take a moment and criticize Melania Trump’s choice of footwear during her trip to Houston with President Trump. Because in the midst of a devastating human crisis, the First Lady’s Louboutins really rank up there with “lack of clean drinking water” on the list of crap people care about.

“Never mind that elderly woman clinging to a sofa cushion – did you see her heels?!”

2. That time Salon accused Trump of rooting for the hurricane.

Donald Trump seemed to be rooting for a hurricane to get more powerful https://t.co/OI6m3m9vEa

3. That time POLITICO insulted all of Texas.

Apparently fresh out of give-a-craps for suffering flood victims, POLITICO ran this horrendously offensive political cartoon before Harvey’s last raindrops had even hit the ground. 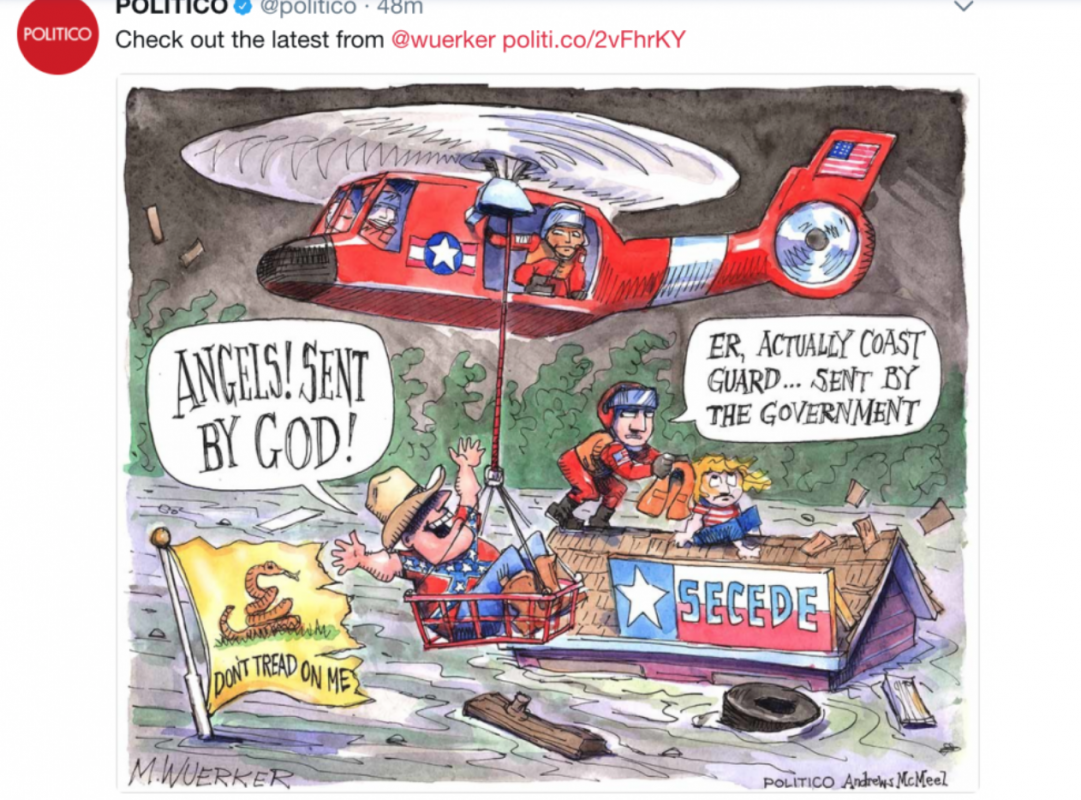 POLITICO received so much public backlash over the cartoon that they eventually deleted their tweet -- though they left the cartoon up on their website.

Luckily, most Texans were too busy being awesome to pay much attention.

4. That time Slate insulted all of America. 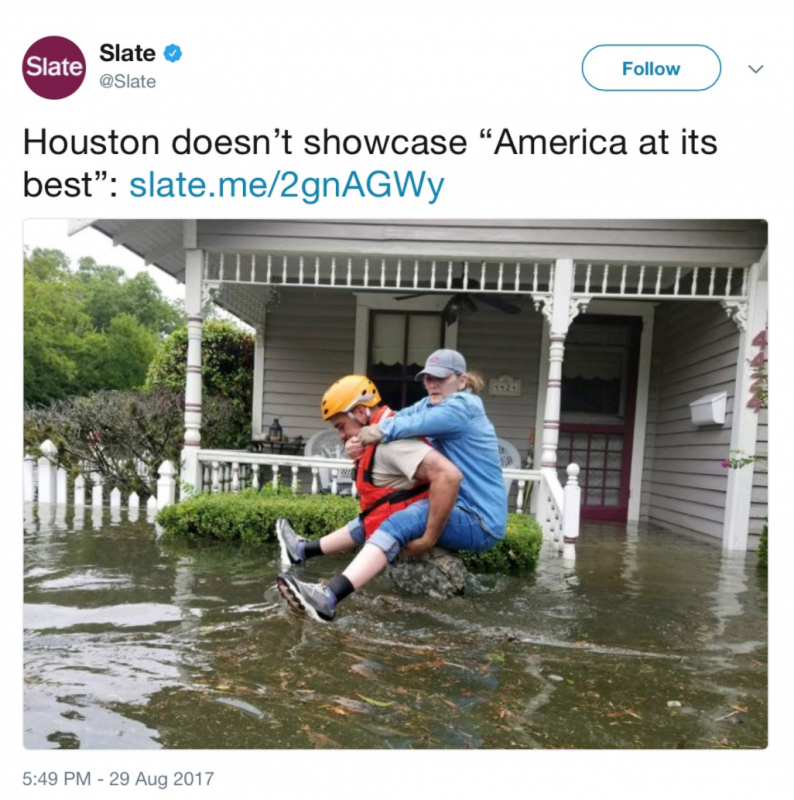 Why? Because they’re liberals, and they have no joy.

5. That time the Women’s March made it all about race.

6. That time some liberal activists scammed people out of their disaster relief money.

A left-wing activist group caled the Texas Organizing Project has been shamelessly pandering for donations to allegedly assist disaster victims left homeless by Hurricane Harvey. And by “assist,” we mean “fight income inequality and whine about how white people suck.”

Don’t look so surprised. It happened.

7. That time everything was about climate change.

Desperate to hitch every mere puff of wind to their favorite Sacred Cow, the left spared no expense blaming everything from Appalachian coalminers to the internal combustion engine for Hurricane Harvey. (All while conveniently ignoring, of course, that hurricanes have been happening on Planet Earth for umpteen-gazillion years, and have actually been getting, on average, much less intense. But, facts.)

8. That time an idiot professor said the whole storm was just karma for 2016.

Ken Storey, a visiting professor of sociology at the University of Tampa, found himself up the unemployment creek without a paddle after tweeting that Texans deserved to get smacked with a hurricane because they largely voted for Donald Trump.

Hurricanes suck. But if we've got to spend the next however-many months cleaning up the mess, at least we have the left to make us laugh.