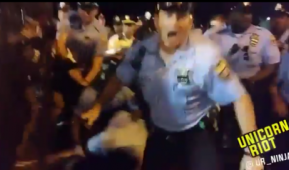 Most protesters were Bernie-or-bust voters carrying large cut-outs of their socialist icon's head and hands or now-obsolete campaign posters. Anarchists and communists also supplemented the crowd.

DiBlasio noted that the protesters were gathering at the one section of the DNC fencing that didn’t have two rows of fences. The single barrier was bolstered by three rows of police, none of whom appeared to be wearing riot gear, according to DiBlasio.

As DiBlasio panned the crowd, one lady informed another, “Don’t be afraid of protesters. Be afraid of the cops.”

A little while later, tensions boiled over as about a dozen anarchists stormed the DNC border fence and had an altercation with police on the other end, according to abc7.

This event was caught on camera by socialist, online news source, Unicorn Riot, which said the attackers wielded bolt cutters against the oppressive DNC fence. 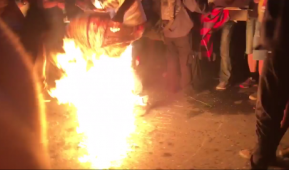 Angry Bernie-Or-Bust protesters have made the DNC protests much more inflammatory — both literally and figuratively — than the protests at last week’s RNC.

As Obama gave his speech Wednesday night, USAToday Digital Editor Natalie DiBlasio reported that “hundreds—possibly a thousand” protesters lined up along the fence separating Democratic invitees from everybody else.

Protesters carried giant cut-outs of Bernie Sanders’ head and “Bernie 2016” posters. They chanted: “This is what democracy looks like,” “Election fraud,” “Bernie won,” “Bernie or bust,” “We want power,” and other similar chants.

Other protesters lit an American flag on fire, saying things like, “Burn that s--t down,” and “Burn that f--king white capitalist s--t the f--k down.”

A person wearing a long summer dress or skirt ran out from the crowd to stomp on the flag. He or she promptly caught on fire and fell to the ground as the crowd tried to put the fire out. The Daily Caller reports that the person was a man, but abc7 reports that it was a woman. 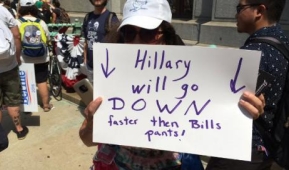 Bernie supporters almost carried their socialist icon to the Democratic nomination, but whether or not Hillary would have beat him fair and square, we will never be known.

In lieu of the recent Wikileaks email scandal revealing that the Democratic Party helped rigged the primary for Hillary, Bernie supporters want out—as they made clear to comedian Sarah Silverman during her DNC speech—even if Bernie himself does not.

Here are five of the craziest sights at the Bernie protest outside the DNC. (Each scene was caught by BuzzFeed News journalist Jim Dalrymple, who is unaffiliated with the Media Research Center.)

1. BERNIE SUPPORTERS REDISTRIBUTE THE CHANT: “LOCK HER UP”

“Lock her up!” was the go-to chant for last week’s RNC. Republicans have long been upset about Hillary’s lying about keeping classified emails on a private server. In light of that scandal, Bernie once said dismissively, “The American people are sick and tired of hearing about your damn emails.”

When it turned out the Democratic Party was using email to plan its secret campaign against Bernie, Bernie supporters were not sick of hearing about the damn emails. So, they plagiarized a chant from the RNC playbook. 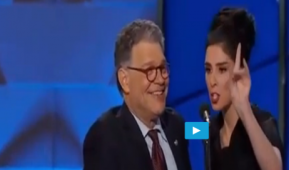 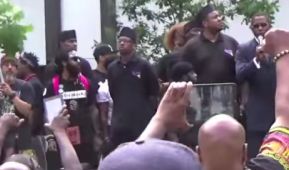 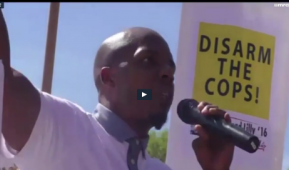 The Workers World Party Presidential candidate, Monica Moorehead, and VP candidate, Lamont Lilly, helped to kick off the protests at the RNC on Sunday, the day before the start of the convention.

Both candidates for this American communist party gave speeches at the start of the “Shut Down Trump and the RNC” march on Sunday. The VP candidate, Lamont Lilly, then helped to hold the banner at the front of the march as it chanted its way through Cleveland.

After leading the “Power to the people” chant, Lilly particularly wanted to share a few thoughts about Black Lives Matter. “Yeah, we face helicopters,” he said. “Yeah we face police departments, and tanks, and tear gas, and smoke bombs. With children in the—marching. With women marching.”

Moorehead spoke shortly after Lilly. She explained that she and Lilly “don’t give a damn about these elections.” They aren’t running to “win,” but to “put forth a message.”

The message of the Workers World Party is “to defend Black Lives Matter, to stop the deportations and raids against our migrant sisters and brother and their families, to abolish capitalism—the whole damn system is guilty—and to fight for a new socialist society.”

Moorehead doesn’t just want to abolish capitalism, but the police as well.