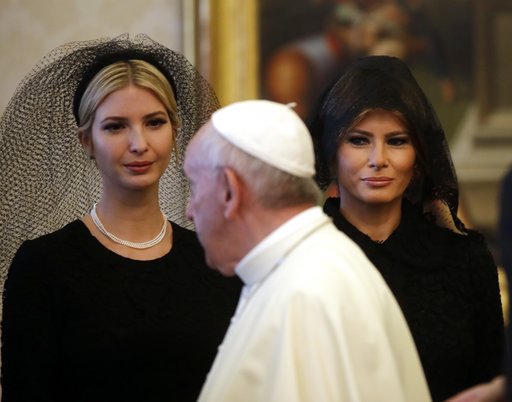 On Wednesday morning, President Donald Trump continued his first foreign trip with a visit to the Vatican where he met with Pope Francis, the head of the Roman Catholic Church. In short order, many members of the media took to the internet to tweet their #hottakes of the trip, revealing that they still don’t really understand how Catholic tradition works.

Celebrities made fun of First Lady Melania Trump and First Daughter Ivanka for wearing all-black dresses and veils to their papal visit. Celebrity Gossip blogger Perez Hilton asked in a now-deleted tweet why the two women looked like they were dressed for a funeral. Actor George Takei made a similar observation, tweeting a picture of Melania and Ivanka with the question “Who died? Oh yes, DEMOCRACY.”

But Melania and Ivanka were just following a well-established tradition of heads of state dressing in all black and their wives wearing veils when meeting the Pope. The color black, along with head coverings called mantillas, are worn as a sign of respect and sobriety in the presence of the Supreme Pontiff.

Some outlets acknowledged this tradition, but just could not pass up the opportunity to make fun of the Trumps. Buzzfeed included a link to a CNN article explaining the dress code but still included a series of Melania and Ivanka photo-shopped into funeral scenes. The CNN article, headlined “Melania Trump wears veil, but not a headscarf,” implicitly compared the Catholic Church to the oppressive regime of Saudi Arabia, where dress codes for women are prescribed by law.

Former First Lady Michelle Obama also wore all black and a veil when visiting Pope Benedict in 2009. Even recent presidential candidate Hillary Clinton followed this protocol on a visit to the Vatican in 1994 with her husband President Bill Clinton.