Trump: ‘We Cannot Repeat in Afghanistan the Mistake Made in Iraq’ 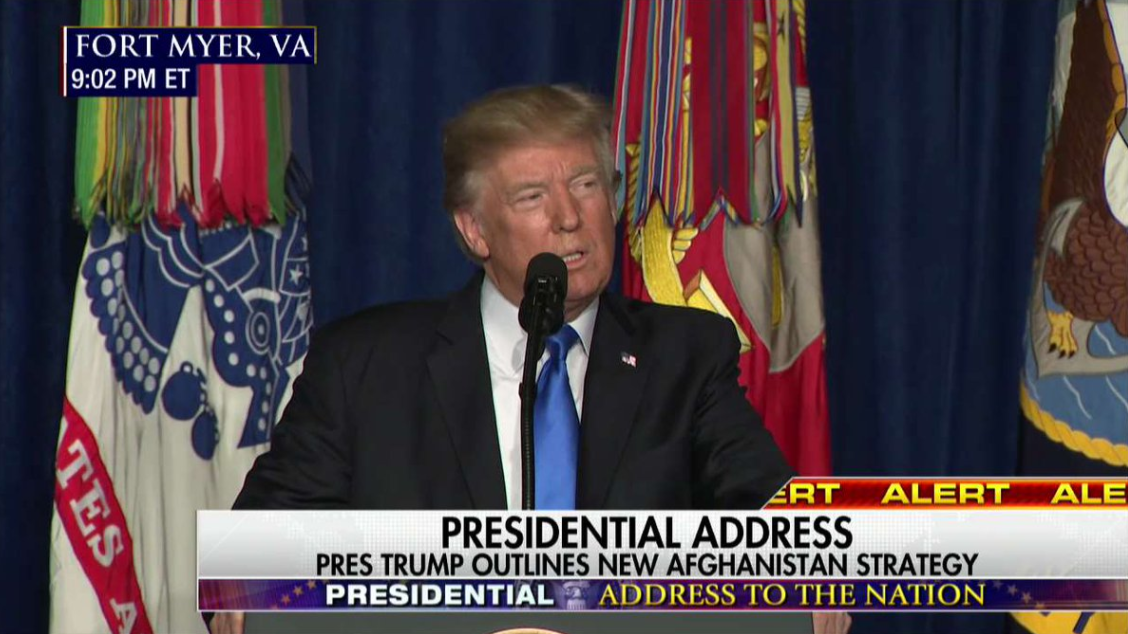 President Trump announced in a national address on Monday his administration's strategy for the U.S. war in Afghanistan.

He explained that his first instinct was “to pull out” of Afghanistan, but after directing his top generals to research and come up with a new plan for the war, he does not want to withdraw and facilitate conditions that would allow the Taliban and other terrorist organizations to flourish.

“A hasty withdrawal would create a vacuum that terrorists...would instantly fill,” said the president, speaking from Fort Meyer in Arlington, Va. “We cannot repeat in Afghanistan the mistake our leaders made in Iraq.”

“We must stop the resurgence of safe havens that allow terrorists to threaten America,” he said.

Trump did not say whether the U.S. would be increasing the number of troops in Afghanistan or when the U.S. intends to begin or end military operations because that would be “counterproductive," he said.

As the first part of the new plan, he said the U.S. is shifting its approach from a "time-based approach" to one based upon "conditions on the ground."

“Conditions on the ground, not arbitrary time tables, will guide our strategy from now on,” said Trump.

“I will not say when we are going to attack, but attack we will,” he added.

The strategy also involves continued support for the Afghan government and its military, but will not involve dictating the government’s values nor the Afghan people’s way of life.

"Ultimately, it is up to the people of Afghanistan to take ownership of their future," he said.

“We are not nation-building again,” Trump went on. “We are killing terrorists.”

.@POTUS: "We are not nation-building again, we are killing terrorists." pic.twitter.com/C1tDpnYLtr

The plan also involves a change in how the U.S. deals with Pakistan, which provides “safe-havens for terrorist organizations that pose a threat to the region and beyond.”

The president went on to say that his administration will provide U.S. armed forces “the necessary tools and rules of engagement to make this strategy work.”

“Micromanagement from Washington, D.C., does not win battles,” said Trump.

The U.S. war in Afghanistan began under President George W. Bush in October 2001.

The Taliban reportedly holds more ground in Afghanistan today than when the U.S. first entered the country just weeks after 9/11.

As of March 2017, there were less than 9,000 U.S. troops in Afghanistan, according to the U.S. Department of Defense.

Watch the address below.