Trump: ‘So Much Money’ Has Been Wasted By U.S. Gov’t But When It Comes to Border Security, Dems ‘Fight to the Death’

President Trump early Wednesday morning went on a full-blown rant on Twitter about how Democrats are refusing to provide funding to build a wall on the U.S.-Mexico border.

Trump in a first tweet said that the government has wasted “so much money … for so many years, but when it comes to Border Security and the Military, the Democrats fight to the death.”

“In our Country, so much money has been poured down the drain, for so many years, but when it comes to Border Security and the Military, the Democrats fight to the death,” he wrote. “We won on the Military, which is being completely rebuilt. One way or the other, we will win on the Wall!” 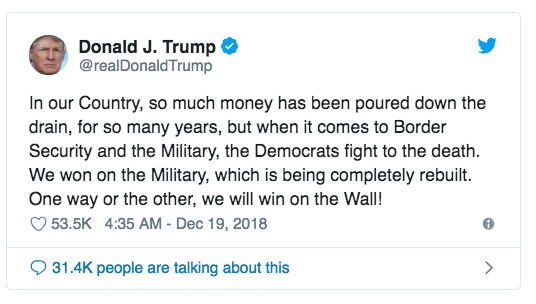 Well, he has a point. As MRCTV has reported, the federal government has spent millions of taxpayer dollars on ridiculous projects, including over $52 million on housing for chimpanzees, $2.6 million to study stickleback fish, nearly $75,000 for a university to create "electronic puppets," and $40,000 for the U.S. to conduct migratory studies of other countries FOR other countries. And that's just from Oklahoma Sen. James Lankford's 2017 list of "Federal Fumbles." Who knows what else will make the list this year.

Trump followed his early morning tweet by saying that Mexico will be paying “indirectly” for the wall through the new North American trade agreement that will replace NAFTA.

The trade deal signed on Nov. 30 has not been approved by Congress just yet. 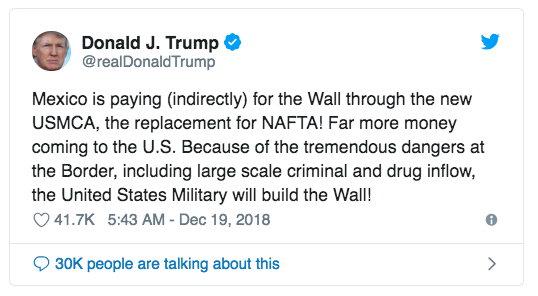 Critics have questioned his claim that the USMCA would be an alternate source of funding as the White House has suggested.

President Trump's remarks come amid a battle over the budget between the White House, Congress Democrats and Republicans.

Democrats have refused to provide Trump with the $5 billion he requested to build the wall and continue to reject Republican spending offers, even without the border wall funding included.

A new poll this week shows that if Democrats refuse to fund the wall, one-in-five U.S. voters would be willing to privately fund the project in the interest of national security.