Trump: You Need Your ID to Buy Groceries – But Not to Vote?

“We believe that only American citizens should vote in American elections,” said Trump. “Which is why the time has come for voter I.D., like everything else.”

President Trump, telling his supporters why he wanted Americans to be required to show identification before casting their votes, claimed that they needed to have IDs "to buy groceries." He did not elaborate. https://t.co/iYSYzA2XxM pic.twitter.com/H4DGjZVYxy

This is not the first time Trump has called for called for new voter identification laws. 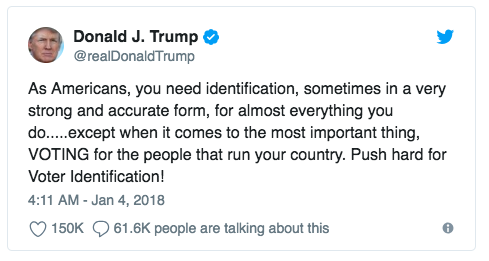 Trump has claimed that voter fraud was an issue in the 2016 presidential election and has called for voter I.D. as a way to prevent any potential fraud in future elections.

His remarks come as the city of Boston weighs giving non-citizens voting rights, as MRCTV reported.