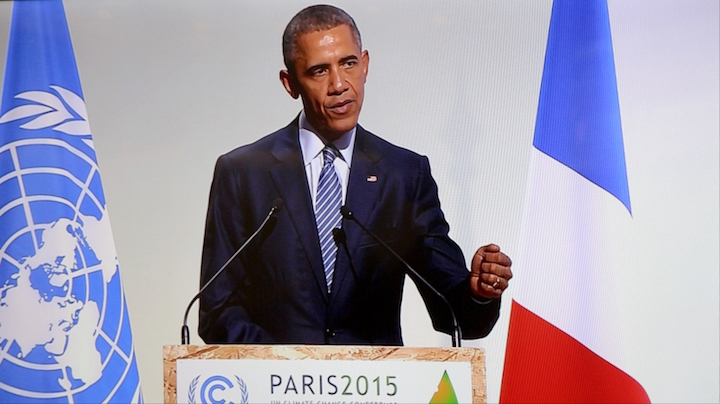 Twenty-eight Republican senators have sent a letter to Secretary of State John Kerry demanding he follow the law and prohibit funding for the United Nations Framework Convention on Climate Change (UNFCCC). The law in question is the 1994 Foreign Relations Authorization Act, which bars funding of “any affiliated organization of the United Nations which grants full membership as a state to any organization or group that does not have the internationally recognized attributes of statehood.” On March 17th of this year, the UNFCCC granted full membership to the nonexistent state of Palestine.

"We request that you ensure that no disbursements of U.S. finds are made to the UNFCCC and its related entities after March 17, 2016. We believe that your failure to do so will constitute a violation of current law."

The senators say the UNFCCC’s decision to allow Palestinians to seek statehood recognition through a means other than direct negotiations with Israel undermines efforts to achieve a peace agreement.

"We implore the administration to hold the Palestinians accountable for their actions in circumventing the peace process, and to abide by current law prohibiting U.S. taxpayer funds for the UNFCCC and its related entities and other UN affiliated organizations that recognize the ‘State of Palestine,’” the senators wrote."

The law has been successfully used to cut off U.N. funding in the past.

In 2011, after The United Nations Educational, Scientific and Cultural Organization (UNESCO) accepted Palestine as a member state, the U.S. followed the law and pulled funding for the U.N. group.

In the case of the UNFCCC, the senators may have an ulterior motive for enforcing the law.

The UNFCCC was behind the Paris climate talks at the end of 2015 that led to the Paris climate agreement where President Obama and more than 190 other countries met and made pledges to reduce their carbon emissions. In the case of the U.S., Pres. Obama committed $100 billion dollars to help developing nations implement the agreement.

Back in November, when Obama was preparing to leave for the Paris talks, many of the same senators who signed the letter described above sent him a different letter objecting to Obama's unilateral action:

We therefore request that you direct United States Special Envoy Todd Stern to be forthcoming with his foreign counterparts representing developing nations in Paris about the views of members of Congress. He must provide these nations with the full picture of where a co-equal U.S. branch of government stands on these issues. He must explain that Congress will not be forthcoming with these funds in the future without a vote in the Senate on any final agreement as required in the U.S. Constitution.

It seems reasonable to assume the purpose of letter to withdraw the UNFCCC funding was not only to enforce the 1994 Foreign Relations Authorization Act, but also to weaken an agreement which spent taxpayer money and leads to a loss of jobs - without abiding by the constitutional requirement to gain congressional approval.