Remember how Rolling Stone in 2017 paid huge settlements to a University of Virginia fraternity and university administrator because it published unfounded, erroneous, claims about a gang rape at the frat – a crime that never occurred?

The magazine seems to have sunk to those kinds of nonexistent “journalistic standards” again, and it’s been joined by numerous other media outlets – all of which reported the false claim that a hospital chain in Oklahoma was so overwhelmed by people who’d “poisoned” themselves with the drug ivermectin in attempts to treat or prevent COVID-19 that the facilities couldn’t accept gunshot victims at their ERs.

On Sept 1, the magazine ran with an unsubstantiated claim made by Dr. Jason McElyea to Oklahoma TV station KFOR, Channel Four. It was a claim KFOR continued to run, despite the story starting to collapse, and as of Sunday, September 5, the station hadn’t bothered to remove, retract, or adjust it, and said, in part:

Dr. McElyea said patients are packing his eastern and southeastern Oklahoma hospitals after taking ivermectin doses meant for a full-sized horse, because they believed false claims the horse de-wormer could fight COVID-19.

Just a few problems with that.

Claims that ivermectin can fight COVID-19 not only have NOT been proven false, they are supported by the head of the Tokyo Medical Association calling for all COVID-19 patients to get it, instead of the mRNA jabs, to the vaunted US National Institutes of Health (NIH), which, as far back as February, reported on the parallel use of the drug – a report about which, strangely, the self-styled godhead of “SCIENCE,” Anthony Fauci, seems to have been eerily mum. The subject is certainly debatable.

Yes, that would be ivermectin, which the left repeatedly calls a “horse de-wormer” as a seeming way to make it sound “fringe” – to make it seem as if its original use is its only use, instead of the reality that (as the NIH report notes) it has been used for years all over the world to save HUMAN lives as a powerful weapon against tropical diseases such as nchocerciasis, helminthiases, and scabies, that it is being evaluated as a potent weapon against malaria because it kills mosquitos that feed of treated livestock and humans, and that it is well-tolerated by people.

That would be ivermectin, the discovery of which was honored by the Nobel Committee in 2015 because of its astounding ability to fight myriad human afflictions. As ScienceDirect notes in its latest issue, Volume 43:

In 2015, the Nobel Committee for Physiology or Medicine, in its only award for treatments of infectious diseases since six decades prior, honoured the discovery of ivermectin (IVM), a multifaceted drug deployed against some of the world’s most devastating tropical diseases. Since March 2020, when IVM was first used against a new global scourge, COVID-19, more than 20 randomized clinical trials (RCTs) have tracked such inpatient and outpatient treatments. Six of seven meta-analyses of IVM treatment RCTs reporting in 2021 found notable reductions in COVID-19 fatalities, with a mean 31% relative risk of mortality vs. controls. During mass IVM treatments in Peru, excess deaths fell by a mean of 74% over 30 days in its ten states with the most extensive treatments.

But remember, you in pop media, keep calling it “horse de-wormer,” because that’s extremely helpful.

Which brings us to Rolling Stone (RS).

Without properly vetting the story, RS ran with the tall tale, taking Jason McElyea and his claims to KFOR seriously and, evidently, without bothering to call any of the hospitals he claimed were in trouble due to all the fans of the eeeeeeviiiiil ivermectin.

Instead, they parroted what he told the television station:

‘The ERs are so backed up that gunshot victims were having hard times getting to facilities where they can get definitive care and be treated,’ McElyea said.

In an America that saw purportedly “overwhelmed ER workers” doing complex, well-choreographed TikTok dances in what appeared to be empty hospital wings last year, there are a lot of folks whose “skepticism radar” goes off when they hear that kind of claim.

But, apparently, they don’t work at Rolling Stone.

Northeastern Health System (NHS) Sequoyah, released a statement explaining that McElyea is not employed by them, and that the only way he can be linked to them is as an employee for a medical staffing group that provides coverage for their emergency room. Indeed, as Kevin Tober reports for The Daily Caller:

…(H)e also hasn’t worked at that hospital (Sallisaw) in over two months nor have they treated any patients for Ivermectin overdoses. 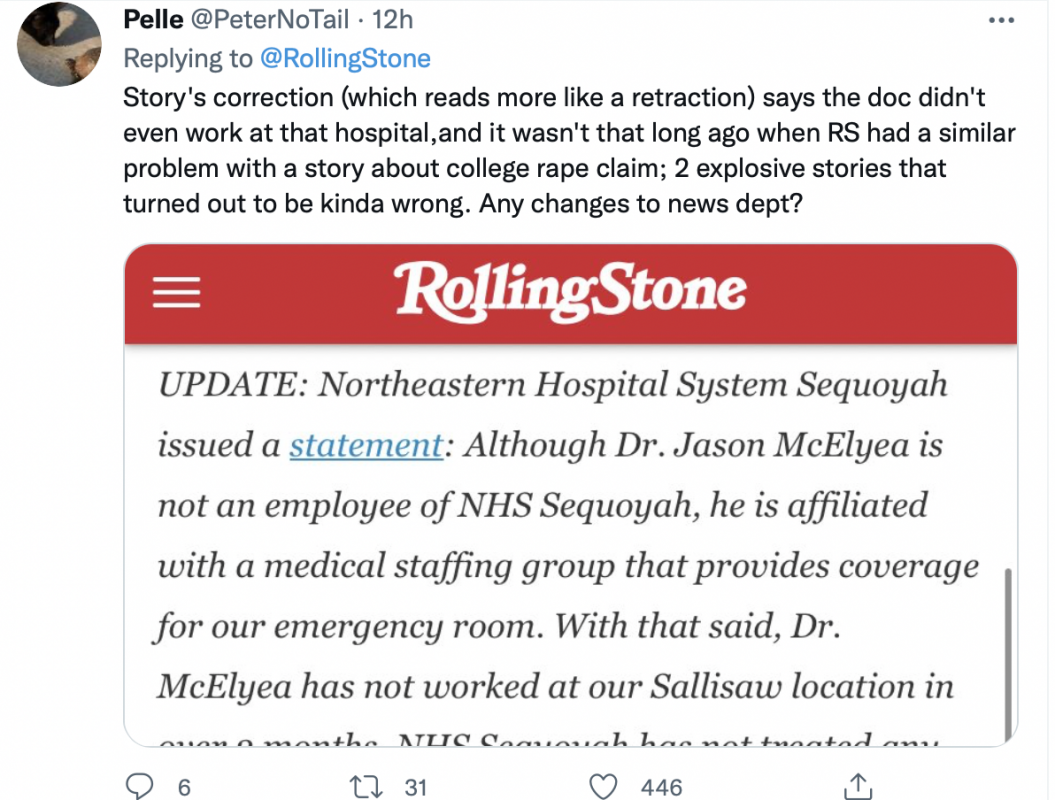 At least Rolling Stone is being a bit more “journalistic” than KFOR. But even THAT stretch towards integrity falls short. On Sunday, September 5, the magazine issued an “update” rather than a retraction, and simply provided the text of the medical system press release.

Glenn Greenwald – a real journalist – said this of the half-hearted RS move:

The only reason Rolling Stone is calling this an ‘UPDATE’ as opposed to what it so plainly is -- a RETRACTION -- is because liberal outlets know that their readers don't care at all if they publish fake news as long as it's done with the right political motives and goals.

That sums it up.

And it merely will help drive people away from Rolling Stone’s so-called “news” coverage.