Rep. Gutierrez Calls for Democratic Party to 'Eliminate' Trump in 2018 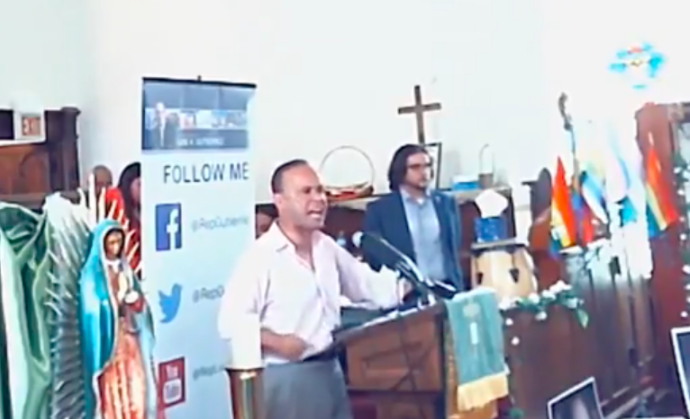 Resident self-promoter and House Rep. Luis Gutierrez (D-Ill.) took time out from a church service on Saturday in Chicago to grace the pulpit with his ever-so-enlightening opinions on President Trump’s immigration policy.

Despite having a microphone directly in his face, Gutierrez shouted at the congregation of people at Chicago’s Lincoln Union Methodist Church, a sanctuary church.

“For me, the major criminal that exists in the United States of America is called Donald Trump,” Gutierrez said, blatantly attempting to ramp up the churchgoers. “He lives at 1600 Pennsylvania Avenue at the White House.”

The Illinois representative spoke with a passion and fervor that only exists in madmen who have no idea what they’re talking about. He continued by predicting that Democrats will “soon be a majority” in the House of Representatives.

"And we're going to take actions today, and we're going to take actions tomorrow," said Gutierrez. "And there will soon be a majority in the House of Representatives, and I'm going to make sure that I am there to make sure of one thing, that we write those articles of impeachment and take him to trial before the Senate and eliminate him as president of the United States of America."

It’s sure to come true, too. Just like Gutierrez’s 2016 presidential prediction that former Democratic nominee Hillary Clinton would take the White House.

That didn’t turn out so well.

On his push for impeachment, that's bold talk coming from someone who pays his own family with campaign donations.

Whether you like Trump or not, look at this practically. What has the man done to warrant impeachment? What laws has he broken?

Gutierrez seems to think that a sitting president has no right to fire the director of the FBI.

First, Trump had every right to fire Comey under the law. The Congressional Research Service published a 2014 report that stated, “There are no statutory conditions on the President’s authority to remove the FBI Director.”

Finally, the United States is NOT a democracy. It’s a Constitutional Republic.

Here is reference.com's definition of a Constitutional Republic:

A type of government in which the officials are elected by the people. The republic must govern according to the laws of the constitution, and its actions are subject to judicial review. Although many people consider it a democracy, the United States is actually a constitutional republic.

Thanks for playing our game, Luis. Unfortunately, you didn’t win this time, but we’re sure you’ll be back to grace us with more stupidity.

For video of Gutierrez’s comments, watch below: