NEW STUDY: Foods with the Most and Least Pesticides Revealed – and Probably Some You Wouldn’t Expect

A new study by the Environmental Working Group has revealed the twelve foods that have the most pesticide residue – some you probably wouldn’t expect to be ranked as top perpetrators.

First on the advocacy group’s 2019 “Dirty Dozen” list released on Wednesday is strawberries, followed by spinach, kale, nectarines, and apples.

Rounding out the list are grapes, peaches, cherries, pears, tomatoes, celery, and potatoes.

Strawberries have been number one now four years in a row. Apples topped the list in 2015 but have since dropped down to the fifth spot.

Kale at third place is a new addition but a concerning one at that, with some samples indicating the presence of a whopping 18 pesticides.

The group found that more than 90 percent of samples of strawberries, apples, cherries, spinach, nectarines and kale tested positive for residues of two or more pesticides, while multiple samples of kale indicated the presence of 18 pesticides.

The EWG explained that the guide was made to help consumers reduce their ‘pesticide exposures as much as possible’ by reporting what fruits and veggies to buy organic and which conventional produce have low levels of pesticide residue.

The group pointed to research showing possibly connections to cancer and fertility and neurological problems.

EWG’s 2019 “Shopper’s Guide to Pesticides in Produce” also features a “Clean Fifteen,” or the 15 foods that were found to have the least pesticide residue. At the top of the list are avocados, sweet corn, and pineapples. 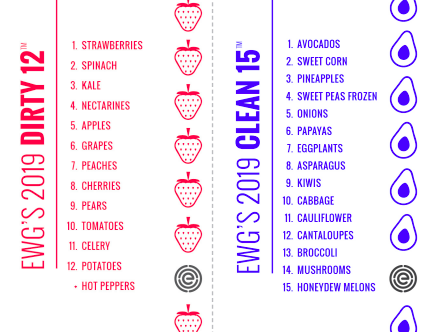