Sometimes you have to wonder how far-leftists automatically know what anyone on the right REALLY means when they say anything. It’s almost as if they’re projecting their own private beliefs into the forefront by projecting them onto people that either disagree with their world view or simply people they don’t like. They always claim that those on the right speak in “dog whistles” or “hatespeak,” but no one else sees the “coded language” but them. It has to make you think whether they’re the ones who are proficient in hate.

The left's recent rhetoric, which is beginning to sound more and more like out-there conspiracy theories, would make CNN’s Don Lemon or MSNBC’s Chris Hayes proud.

We were given yet another example of this with a Tuesday Chicago Sun-Times article, written by columnist Neil Steinberg. The article focuses — or at least it tries to — on Ivanka Trump’s Tuesday tweets bringing up the deadly violence in Chicago amidst all of the coverage the media’s is focusing on the tragedies that struck El Paso, Texas and Dayton, Ohio.

Steinberg took it upon himself to “translate” Trump’s tweets so that readers could all understand the true “hate” that the president’s daughter was pushing. 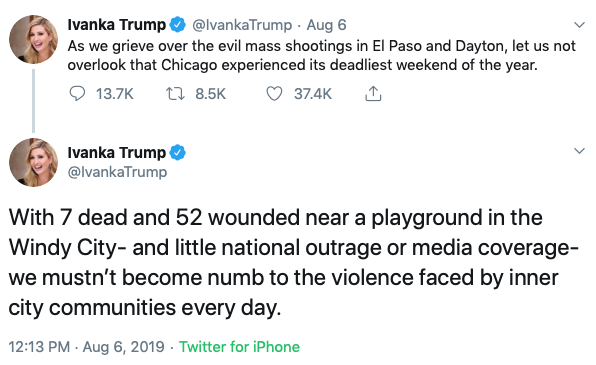 While Trump's tweets definitely could’ve been worded better, the sentiment in them seemed either benign or genuine enough, depending on how you read them. But, that’s not how Steinberg “expertly” translated them to really be saying.

The top tweet, “As we grieve over the evil mass shootings....” means, in hatespeak, “Hey, it ain’t just the white power nuts who love my father who are pulling the trigger. Those black folks in Chicago are killing each other too. So cut us a break.”

And the bottom tweet, beginning “With 7 dead...” is factually wrong in two different ways. First, the carnage was city-wide over the entire weekend, not “near a playground in the Windy City.” (Her confusion might have come from a shooting where seven people were wounded by Douglas Park.) And second, there is a) plenty of outrage, expressed by winking, nodding haters like Ivanka’s dad, who use “Chicago” as a code for minorities they feel momentarily inhibited from slurring in public. Rats in Baltimore one day, shootings in Chicago the next. They can’t come out and say it, as they did in that era in America they consider “Great” and are so frantic to drag us back to.

And b) there might be “little” coverage on Fox News — I don’t know, I wouldn’t watch it if you put a gun to my head — but the story was “hidden” on the front page on the Sun-Times Monday; as big as life on Page 11 of the front section of the New York Times Tuesday, and countless other publications that Ivanka Trump has never read in her life.

After reading that, you might be wondering the same thing I did after I first read Steinberg’s literary excellence — ‘Where’s his tin foil hat?’

By his own admission, Steinberg hears the “dog whistles” of the right and can actually translate people’s words into “hatespeak.” If he’s far from a hateful person himself, how does Steinberg know a) what constitutes a “dog whistle,” and b) what supposed “white supremacists” mean when they say whatever it is they say at the time?

As for his assertion that people who rightfully point out the violence in Chicago only do so because they’re using is as a “code minorities,” Steinberg shows his own racism.

I am a person who writes, almost weekly, about the people who are victims of shootings in Chicago. I don’t do it as some kind of comparison of the amount of people white and black people murder. I write about the sad state of affairs in Chicago, because that was my home for the majority of my life. I care. I love that city, and it hurts to see people killing each other while the politicians, like Chicago Mayor Lori Lightfoot and Illinois Governor J.B. Prizker, talk a big game about curbing the violence while accomplishing nothing to help the situation. I don’t give a damn whether the people dying are black or white. I care that Chicagoans are dying, period.

The fact that Steinberg focused more on Trump’s “hidden meaning” instead of the dead, speaks volumes about the priorities of leftist writers.

The article, which for an analysis of someone else’s words, was extremely short — as if the moment Steinberg finished writing it dropped his keyboard and declared perfection.

So while Steinberg laments over what his political tormenters are REALLY saying with their tweets and speeches, Chicagoans are being murdered.