You ball your fist up and raise the third digit on your hand, that’s what! Well, at least that's what one Vermont business owner did.

Ted Pelkey, the owner of a monofilament recycling and truck repair business, has been looking to move his company from Swanton, Vermont to Westford. To accomplish this, he needs a permit to build an 8,000-square foot garage on his own property, but the local government has refused to issue it to him.

"We've been trying to put a business there for the past 10 years," Pelkey told the Burlington Free Press. "It's just never-ending. They're railroading us really good."

According to the Burlington Free Press:

“Allison Hope, chair of the Westford Selectboard, said Pelkey's application for a building permit fell short of the points it needed to score in the review process by the Development Review Board.”

The board claims there were a variety of reasons Pelkey’s application for a permit was declined, stating he did not “describe the proposed use of the structure” and that the information about lighting was not included and that would “likely be needed for security purposes.”

With town officials halting the expansion of his business, Pelkey decided he would embark on another venture - one that would catch the attention of all the town residents.

The businessman shelled out $4,000 to an artist to sculpt a 7-foot middle finger statue, which he erected on his own property as a billboard for the whole town to see. 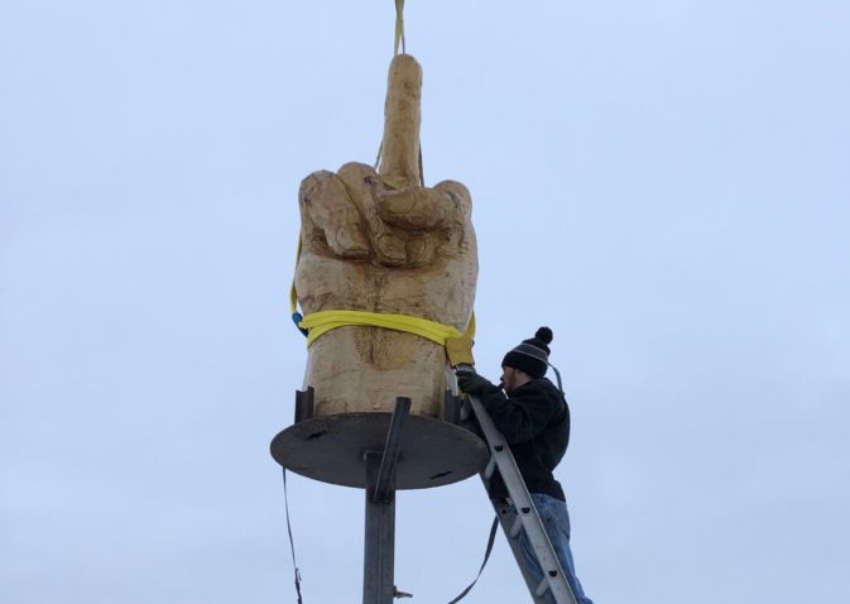 The funny thing is, though the government could stop Pelkey from expanding his business, they cannot stop him from extending a giant middle finger to them because the statue is considered public art.

After looking into the town’s zoning regulations, the town’s planning coordinator found there was nothing they could do to require Pelkey to remove the sculpture.

"He apparently can do what he's done," Hope said. "The Pelkeys can do what they like to exercise their free speech within the laws and regulations.”

Looks like Pelkey is the winner of this battle. Hopefully he and the town can make an exchange: he takes down the middle finger, and they issue him the permit he’s been fighting for for a decade. Seems like a fair exchange.

Here’s a video from WPTZ: