John Iadarola, a “journalist” and online host for the Young Turks, put his virtual foot in his mouth Wednesday when he wrongly attributed a Clinton-era quote to Lindsey Graham, falsely accusing the South Carolina senator of comparing Dr. Christine Ford to trailer trash.

Speaking with The Atlantic’s Jeffrey Goldberg Tuesday, Graham criticized President Trump for seeming to lightly mock Ford’s testimony last week in which she accused Supreme Court nominee Brett Kavanaugh of sexually assaulting her at a high school party in 1982.

"I don't like what the president said last night. I'm the first person to say, 'I want to hear from Dr. Ford.' I thought she was handled respectfully. I thought Kavanaugh was treated like crap,” Graham said, getting a chorus of “boo”s from the crowd.

Graham then pointed out that while the president’s speech wasn’t particularly helpful to the GOP’s cause, it was far from the first personal attack a president or his administration has made against a woman who’s accused a prominent political figure of sexual assault.

“Everything he said was factual. It’s frustrating how this nominee has been treated so badly," Graham said.

“I’ll tell you what’s personally degrading:‘This is what happens when you go through a trailer park with a $100 bill,’" he added. "See, this is not the first time this has happened.”

Lindsey Graham on Christine Blasey Ford: "This is what happens when you go through a trailer park with a $100 bill."

And on Donald Trump viciously mocking a sexual assault victim: "Everything he said was factually true." pic.twitter.com/ZPJEDJaxjg

There’s just one glaring problem: Graham wasn’t referencing Ford. He was quoting James Carville, a former Bill Clinton operative who famously mocked Clinton accuser Paula Jones back in the late ‘90s by saying, “Drag a $100 bill through a trailer camp and there's no telling what you will find.”

Goldberg quickly pointed out that the quote Graham had referenced was from Carville - a head-nod that liberal Twitter didn't bother to mention.

Twitter was quick to call out Iadarola for his misleading post, which was still up and active as of 2 p.m. Wednesday.

Man, delete the tweet. Graham was quoting what James Carville said about Paula Jones to make the point that Dems used degrading language about female accusers in the past. He wasn't using those words to describe Ford.

I expected more from you, John. I guess I won’t make that mistake again.

Awesome. Now, clearly biased hack who pretends to be a journalist, tell everyone what that quote is from and who said it. I’ll wait.

Unfortunately, many others were quick to pick up the attribution and run with it, wrongly slamming Graham for comparing Ford to a woman from a trailer park. In a now-deleted tweet, even Yahoo News ran with the rumor: 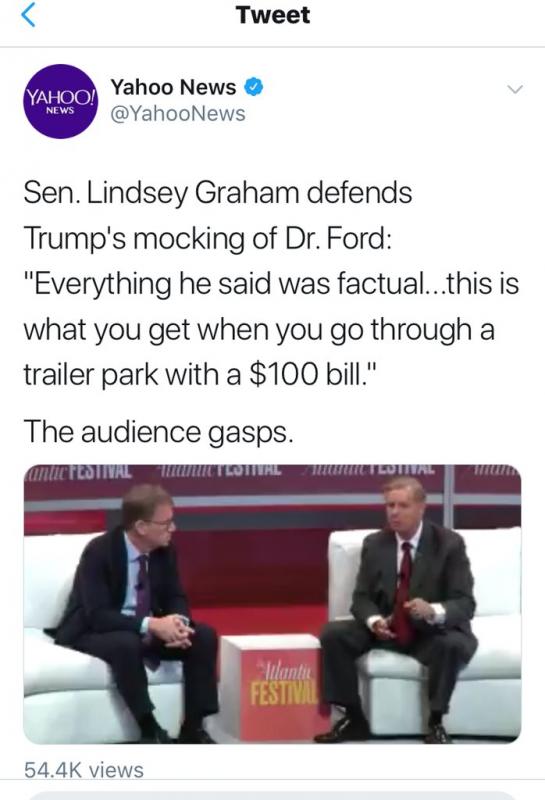 To his point, Graham was simply pointing out Carville’s odious statement as an example of a truly “personally degrading” comment – and one that would never be called out by the media. And he’s right. While the media is all-too-happy to slam Trump for “mockingly” pointing out the factual errors and gaps in Ford’s testimony, they seem to have conveniently forgotten their own role in helping Clinton skirt allegations that he’d sexually assaulted not one, not two, but several women.

Iadarola’s grossly misleading tweet not only proves Graham's point, but raises another: either Iadarola needs to brush up on his political history before opening his mouth, or he -- along with every other media pundit who retweeted him -- is willfully misleading the American people and lying about a U.S. senator.

You can decide which.