June 6: The 72nd Anniversary of D-Day

June 6, 1944 is a day that will forever hold a hallowed place in the annals of history.

On this day, the 72nd anniversary of D-Day, we remember those that bravely stormed the beaches of Normandy, France. We honor both those that survived, and we honor those that paid the ultimate price in the face of tyranny.

According to history.com the allied invasion, also known as Operation Overlord, involved 156,000 soldiers from the U.S., Canada and Britain storming a 50-mile stretch of beaches along the northern French coastline. The attack portion of the mission was known as Operation Neptune.

Despite the perception of many, the “D” in D-Day actually does not stand for anything. The term “D-Day” is a military term that simply means the beginning of an operation.

While the three previously mentioned nations provided the bulk of the troops for the invasion, there were other nations that participated in the attack: Australia, Belgium, Czechoslovakia, France, Greece, the Netherlands, New Zealand, Norway and Poland. The campaign led to the liberation of Northern France from Hitler's Nazi occupation, and by the Spring of 1945 the Allied forces had defeated the Germans.

In memory of D-Day, some have taken to Twitter to honor those brave soldiers, many of whom stormed the beach knowing they wouldn't be coming home. 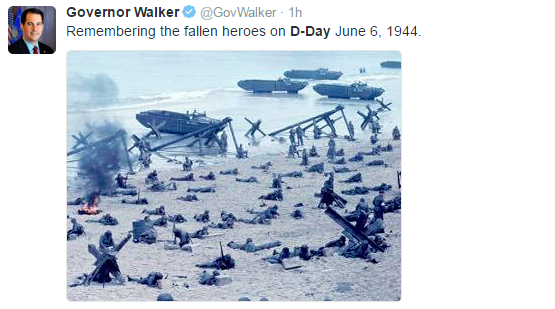 MRCTV would like to send a heartfelt thank you to all of the soldiers who fought to protect democracy in the face of fascism, and a thank you to those that still fight for freedom.

The Battle of the Bulge