I Know It Was You, Cuomo! CNN's Chris Cuomo Tries to Physically Intimidate Heckler Who Called Him 'Fredo'

Update (8/13/2019, 11:16 am): CNN's Chris Cuomo sent out a tweet in response to "all the support" he's received after video emerged of his confrontation with a heckler who called him "Fredo."

Okay, that's all well and good. How about finally condemning Antifa now?

Original Story: Well now. I guess we all know why CNN’s Chris Cuomo gives a free pass to violent groups like the domestic terrorist organization Antifa. The CNN anchor apparently has no problem physically intimidating people who are critical of him. Another leftist, another fake tough guy.

Cuomo was seen in an “unverified video” accosting a heckler who allegedly called him “Fredo,” which Cuomo claims is a slur akin to the “n-word” for Italians. The CNN host attempted to couple his trash talking with physical intimidation, but the heckler didn’t back away.

"Fredo" refers to the character of "Fredo Corleone" in the classic film series, "The Godfather." "Fredo" was seen as the weakest member of the Corleone family.

In his smack talking exhibition, Cuomo called people “from the right” “punk-ass b****es.”

Check the video out below:

What was with Cuomo changing his voice to sound like a Hollywood version of an Italian New York mafioso?

Take it easy, “Fredo.” You’re the first Italian I’ve ever heard of that considers “Fredo” as an insult equal to the “n-word.” It’s definitely an insult, but unless you’re a traitor, snitch, stupid or a sellout, the name “Fredo” isn’t really used all that often.

As you could see throughout the video, Cuomo acts like a fake tough guy by asking the other guy to “take a swing” at him while people began to hold him back.

In response, both President Donald Trump and Donald Trump Jr. took to Twitter to put their two cents in on the altercation.

“I thought Chris was Fredo also,” President Trump tweeted along with the video of the incident. “The truth hurts. Totally lost it! Low ratings @CNN.” 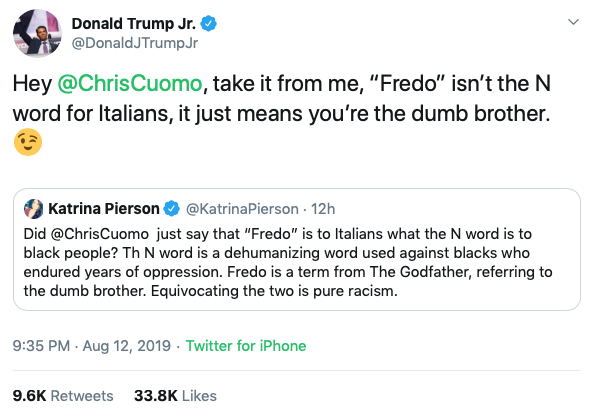 Ouch. Trump Jr. also posted a tweet questioning just how offensive Cuomo actually thinks the name “Fredo” is since he didn’t seem all that upset when Ana Navarro-Cardenas said it on CNN in front of Cuomo.

Does CNN’s head of PR still think “Fredo” is an ethnic slur after watching this? Because if it’s the N word for Italians like @ChrisCuomo says, I don’t understand why Chris seems so at ease with someone saying it here. An excuse just as fake as his news. #FredoCuomo https://t.co/8G8yuY80CK pic.twitter.com/1gwVyDVCob

Not to be outdone, CNN came out with a statement “completely” in support of Cuomo and his actions.

"Chris Cuomo defended himself when he was verbally attacked with the use of an ethnic slur,” CNN said in a statement, according to Variety. “We completely support him.”

I can almost admire Cuomo for standing up for himself, if that’s what he was actually doing. At the same time, this can’t be the first time someone said something as supposedly inflammatory as “Fredo” to Cuomo’s face.

In the end, maybe Cuomo was just trying to have his own “I am Spartacus” moment.