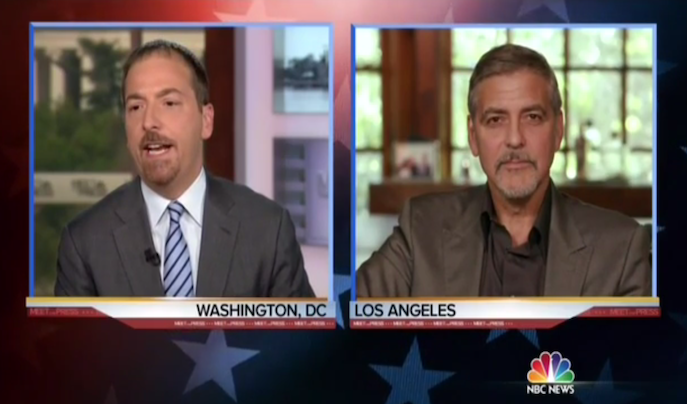 In a strange "Meet The Press" interview on Sunday, actor George Clooney admitted that the kind of fundraising he is doing for Hillary Clinton represented an "obscene amount of money" - but, then claimed that he was doing it to get the big money out of politics.

Chuck Todd began the questioning by bringing up a $353,000-a-couple fundraiser for Hillary Clinton that Clooney held two days earlier and asking the movie star whether that was an obscene amount of money.

Clooney: Yes. I think it's an obscene amount of money. I think that, you know, we had some protesters last night when we pulled up in San Francisco and they're right to protest. They're absolutely right. It is an obscene amount of money. The Sanders campaign when they talk about it is absolutely right. It's ridiculous that we should have this kind of money in politics. I agree completely.

Todd: You know, it was interesting. We caught, our camera caught you having a conversation with the protesters last night. What did you say to them?

Clooney: Well, it was a funny thing. I went over to try to talk to them and you said I was some corporate shill which, you know, me that's one of the funnier things you could say about me. And then he just said, you know, "You sucked as Batman." And I was like, "Well, you kind of got me on that one."

And then I walked away and that was basically it. But, you know, I think what's important and what I think the Clinton campaign has not been very good at explaining is this and this is the truth: the overwhelming amount of money that we're raising, and it is a lot, but the overwhelming amount of the money that we're raising, is not going to Hillary to run for President, it's going to the down-ticket.

It's going to the congressmen and senators to try to take back Congress. And the reason that's important and the reason it's important to me is because we need, I'm a Democrat so if you're a Republican, you're going to disagree but we need to take the senate back because we need to confirm the Supreme Court justice because that fifth vote on the Supreme Court can overturn Citizens United and get this obscene, ridiculous amount of money out so I never have to do a fundraiser again. And that's why I'm doing it.

The video of this segment is embedded at the bottom of this post.

Mr. Clooney is correct in one case: most super-hero movie fans would agree that, out of all the people who played Batman in the movies, he is widely seen as the worst. In fact, when Ben Affleck was cast as the Caped Crusader from Gotham City in "Batman Vs. Superman," Clooney was asked about the casting and replied, "I am the least-qualified person to comment on anyone playing the role of Batman since I so terribly destroyed the part."

On the other hand, Mr. Clooney is being disingenuous when talking about Citizens United.

If he was taking such a moral stand against big money in politics, he wouldn't be throwing large fundraisers for rich folks (at $353K a couple, it's safe to assume middle-class and/or poor people didn't purchase tickets).

But, even worse is the fact that, even before the Citizens United decision in 2010, Mr. Clooney's friends in Hollywood were pouring big bucks into Democratic candidates' campaign wallets. Open Secrets reports that people in TV/Movies/Music gave $9,907,710 to Barack Obama's 2008 presidential campaign.  And even that didn't account for all of the Hollywood cash.

When people in Hollywood throw dinners like Mr. Clooney threw on Friday, the names and industries are not associated with the money:

The Obama campaign created its own definition of a "volunteer fundraiser," which may not coincide with a common-sense understanding of what a bundler is. For example, celebrities George Clooney and Sarah Jessica Parker each raised millions by promising to have dinner with a certain number of people who donated to Obama. However, their names are nowhere to be found on the list.

If Mr. Clooney still wants to see the effect of "big money" on politics, he should ask President Jeb Bush. Oh wait...

While Jeb had the most money in the 2016 primary race, he didn't have enough support to stay in the race. Well, then, maybe he could ask Texas Senator David Dewhurst; he outspent Ted Cruz by a margin of 3-1 in the 2012 GOP primary for senate, but lost.

There is an old adage in advertising that nothing kills a bad product faster than good advertising. That applies to grocery products, movies such as Clooney's recent bomb, "Hail Caesar," and even political candidates.

Clooney isn't the only liberal who doesn't understand money in politics. Last week Dan Joseph of MRCTV visited the Capital Hill protest by "Democracy Spring." This new movement is trying to bring attention to what they claim is the negative influence that big money has on our political system. These folks get very confused when Joseph points out that they were being funded by the big money of George Soros. The video is as funny as it is revealing and can be seen by clicking here.