In a motive fueled solely by the left’s wild hopes and dreams of securing all future elections -- the U.S. House of Representatives passed an extensive federal overhaul of elections. However, rookie Republicans from Florida took a hard stance against it, taking the time to break down the radical components. 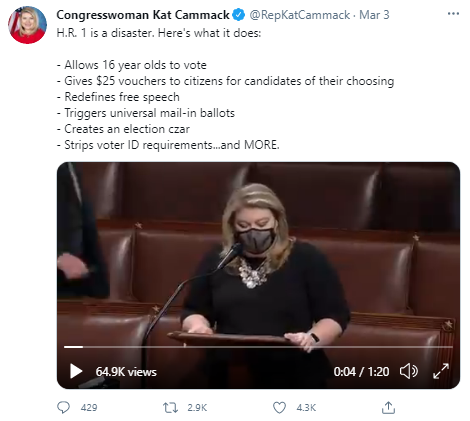 Rep. Kat Cammack (FL-03) led the charge in a powerful delivery on the house floor, “This bill is a power grab that will blur the line between official and campaign resources and leave taxpayers footing the bill. It is shameful that this body is even considering this legislation that forces hard-working Americans, amid an unprecedented crisis, to give politicians money.”

A press release from Rep. Scott Franklin (FL -15)  movingly called on the House to focus on the real issues that Americans are dealing with,

While Democrats call this bill ‘For the People,’ it’s really ‘For the Politicians’—a massive ploy to publicly fund campaigns with federal money, remove state control of elections, forbid photo IDs for voter identification, and allow the IRS to investigate political views of organizations before granting tax-exempt status. These are not the values of an open and free democracy. At a time when we should be working to open schools, vaccinate Americans and strengthen our economy, it’s revealing that Democrats have chosen to make this their signature legislation.

Rep. Carlos Giminez (FL-26) used irony on the House floor to highlight the left’s ignorance on constituent requests, mocking the thought that constituents want more of their dollars to be spent on political mailers.

For The People Act