TIME published an interview with Avenatti on Thursday where the media whore actually said that the next Democratic nominee for president “better be a white male.”

The publication asked Avenatti what kind of person would be best to run for president in 2020.

“I think it better be a white male,” Avenatti said.

TIME’s couldn’t even believe that Avenatti said the nominee should be a “white male. The only question they could muster in response was, “Really?”

Here’s a tweet in response to the pushback Avenatti has received over his “white male” assertion: 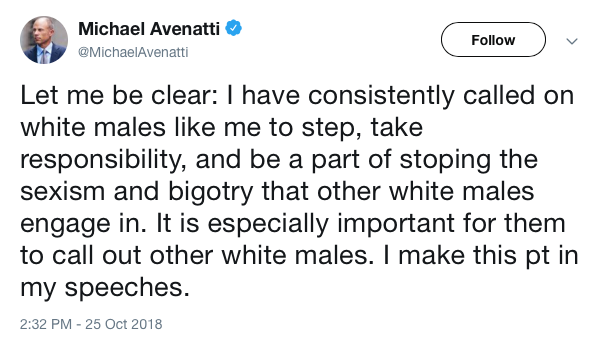 Avenatti’s claims that his call for a “white male” to the Democratic nominee in 2020 is, of course, because of the environment that President Trump has supposedly created.

Avenatti also said the following in the interview:

I can’t tell. Does he “believe” that? Tell us again, Michael.

However, the kicker to the interview was that it was actually conducted on June 25th, but TIME chose to sit on it for some reason.

“Though the statement has struck many as inflammatory, it represents a real, if usually private, debate within the Democratic Party—one that is likely to recur as the next presidential election approaches,” TIME’s Molly Ball wrote.

That’s a pretty petty conversation to have. Instead of worrying about what color a candidate might be, maybe political parties should just focus on who the best person is for the the job? That might seem crazy to some, but it’s just a thought.