A social justice organization known as the People’s Justice League has been intimidating Ohio State University students with threats of eviction after conflating a flag of the Roman Republic with a Nazi flag. 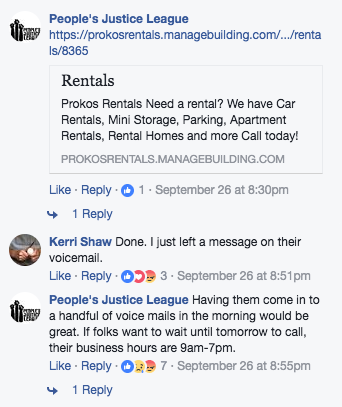 Speaking to the Athens News, the students who lived in the home asked not to be identified out of fear of retaliation. They told the Athens News they have been called “Nazi sympathizers” ever since the People’s Justice League’s post went up.

In a letter to the People Justice League obtained by The New Political, the residents of the home claim they have been subjected to “harassment, libel, stalking, threats, and other instances of persecution and bigotry” as a result of the Facebook post. The Athens News even reports the students claim an individual filed a charge of “hate speech” against them with the Athens Police Department over the flag.

In the letter, the tenants of the Athens home also explained how the Roman flag is different from the hate symbol and Nazi symbol the People’s Justice League claims was used in Charlottesville:

Although true the Italian fascists appropriated ancient Roman symbolism, the original Roman standard holds no affiliation with the fascists groups we have been labeled as. The significant difference in the Roman standard and the fascist appropriation of said standard stems from the inclusion of a fasces, or a bundle of sticks representing the power of collective governance and law. Within the Roman republic, A fasces represented the power and wisdom of a magistrate within the ancient republic. The omission of this critical detail upon our flag demonstrates our non-affiliation with these groups you claim we represent.

The students also state that the flag was present for a Roman-themed birthday party and added that two of the tenants have history degrees.

The letter also calls for the People’s Justice League to remove their posts about the home within 48 hours and issue or an apology, or face legal action.

Sarah Fick of the People’s Justice League told the Athens News she has no plans to take the post down. She also said that while she doesn’t know if the residents are Nazis, she’s not convinced “they’re not” neo-Nazis:

A number of community members have contacted me and said they did speak with them. Based on their attitude and their line of reasoning on this, everything they’re saying and doing aligns with everything that white supremacist, far-right, neo-Nazis are saying and doing… I’m not convinced that they’re not white supremacists or neo-Nazis, but I never said that they definitely were for sure neo-Nazis.