Chelsea Handler Wants to Put Republicans in Cages - Is This the New Norm?

Activist, actress and comedienne Chelsea Handler is a moron. You know that. I know that. But, since when is it okay for any person - let alone someone with the platform Handler has - to publicly espouse the internment of American citizens or anyone else for that matter? Handler will face no repercussions for her words, and I say, "Let her talk." It doesn't mean you necessarily have to listen. Just sit back, pop some popcorn and let people like Handler say what they're thinking. 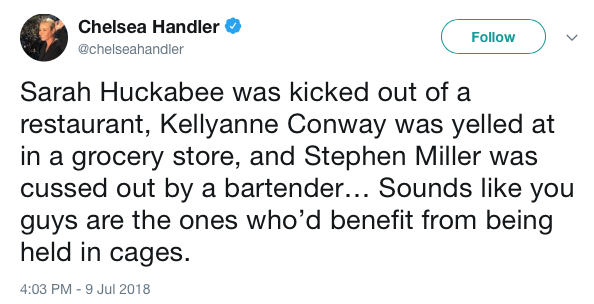 The more people on the far-Left keep talking their nonsense, the easier it'll be for most people with a rational brain to identify those in the public eye who have no interest in the advancement of this country.

Check out my latest video above for my take on the Left's insistence to be the most intolerant "tolerant" people in the U.S. Whether it's the Hollywood Communistic Cult, the media or politicians, we need to begin questioning why the Left is so consistently angry.

Don't forget to check out the video at the top. Stay tuned to MRCTV for more!