Your 2016 Presidential Election Results, By the Minute 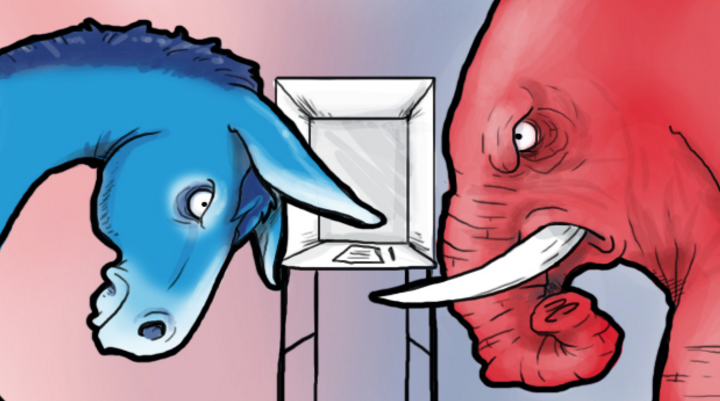 From the Hilton in Midtown, Manhattan, Trump congratulated his Democratic rival Hillary Clinton and her family "on a very, very hard-fought campaign."

Trump made an appeal to those who did not vote for him in the primaries or the general election, asking for "your guidance and your help" to unify the country.

.@realDonaldTrump: "It is time for us to come together as one united people." #ElectionNight #FoxNews2016 pic.twitter.com/oVRp6zP6PR

With 274 electoral votes, Trump has become the 45th President of the United States.

Even though Clinton refused to deliver a concession speech at her Election Night headquarters, she called Trump early Wednesday morning to concede the race.

BREAKING: Hillary Clinton has called Donald Trump to concede the race, according to sources https://t.co/qjxs0ewgVg https://t.co/BZ2b3zj7ix

Clinton will not deliver a concession speech tonight
Clinton campaign manager John Podesta showed up to the Javits Convention Center without the Democratic presidential nominee.
He told Clinton's supporters waiting to hear her speak at the election party that Clinton is still waiting for the final vote count.
"They're still counting votes, and every vote should count," said Podesta. "Several states are too close to call, so we're not going to have anything more to say tonight."
"Everybody should head home," he went on. "Get some sleep. We should have more to say tomorrow."

Republicans maintain control of the Senate 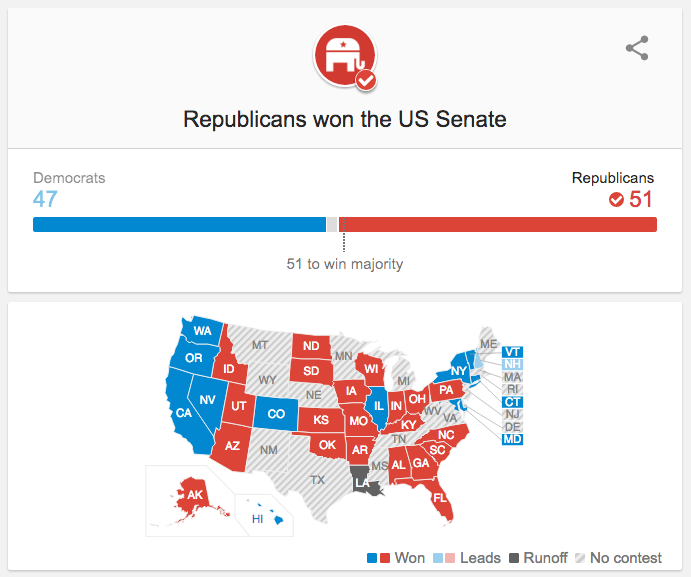 The major news networks have yet to call the race.
States that remain to be called include Alaska, Arizona, Michigan, Minnesota, and New Hampshire.

Trump will speak from the Hilton in Midtown and Clinton from the Javits Convention Center in Hell's Kitchen, Manhattan.

Republicans retain control of the House; close race remains in the Senate

Republicans officially reached the magic number of 218 seats needed to retain control in the House.

The GOP must obtain 51 seats in the Senate, currently leading Democrats 48 to 47.

Close race in Michigan with 16 electoral votes at stake

Trump has a narrow lead of 0.4 percent in Michigan with 72 percent of the state's total votes counted.

If he wins Michigan, he wins the electoral college.

Spirits are low at the Clinton campaign headquarters, with supporters seen crying and even leaving the event venue early.

Clinton is expected to speak at the Javits Convention Center in Manhattan soon.

It isn’t much of a party at Clinton HQ in New York City on this #ElectionNight https://t.co/C2VRXCx2rL pic.twitter.com/x8BbBgm0jr

The Republican presidential candidate needs just 16 more electoral votes to win. He leads in the popular vote by over 132,000 votes. 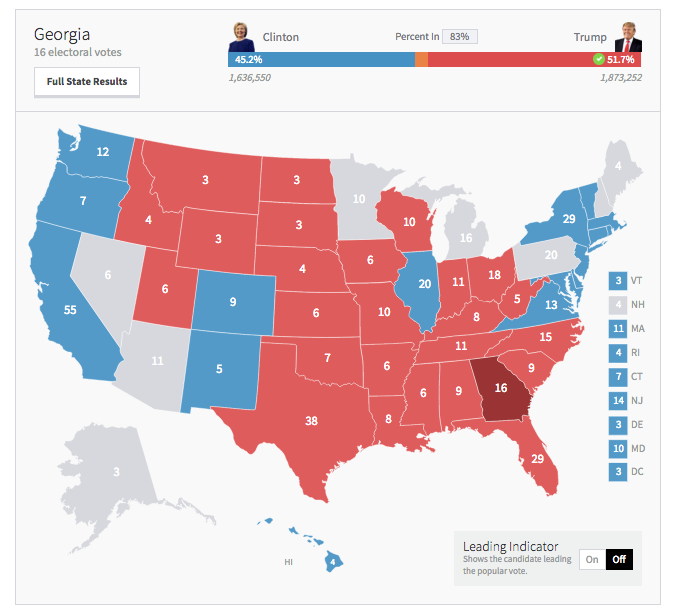 Iowa and Wisconsin called for: TRUMP

Several states including Arizona, Georgia, Michigan, and Minnesota have yet to be called.

Florida and Idaho called for: TRUMP

California and Washington called for: CLINTON

Race tightens in the Senate, with Democrats at 46 seats and Republicans at 48

In the event of a 50/50 tie, the party of the candidate elected president will determine control of the house.

Republicans closing in on the Senate

Republicans have won 47 seats in the Senate, closing in on the magic number of 51 seats needed to retain control. 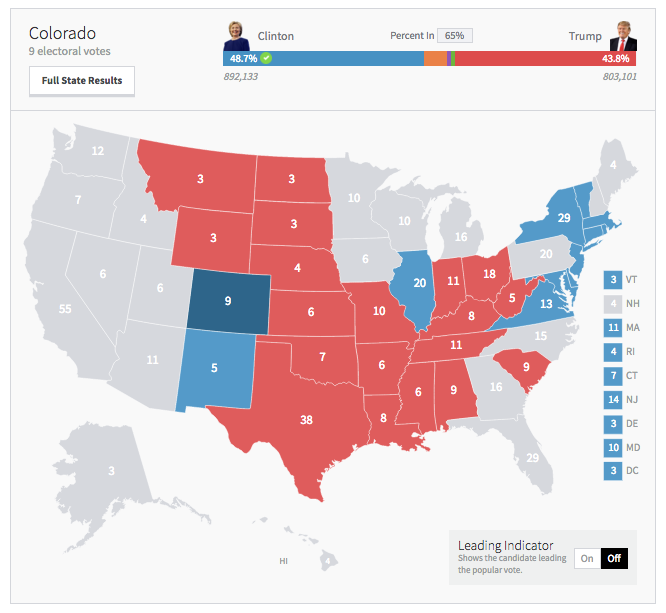 Trump is watching the election results roll in from his campaign headquarters at Trump Tower in Manhattan.

Watching the votes come in at HQ #election2016 #MAGA pic.twitter.com/0oixRl4RBj

Just miles away, Clinton will be hosting an election night party at Manhattan's Javits Center.

Ninety-five percent of the vote has been counted in Florida, with Trump ahead by nearly 118,000 votes and 29 electoral votes at stake.

Republicans maintain control of the House

Democrats were unable to attain the 218 seats required to control the House.

The Senate race is close, with 41 Democrat wins, 43 Republican wins, and 16 seats left in play.

Either party must reach 51 seats for control of the Senate.

Trump is ahead in the battleground states of Florida, Georgia, Michigan, North Carolina, Ohio, and Virginia. 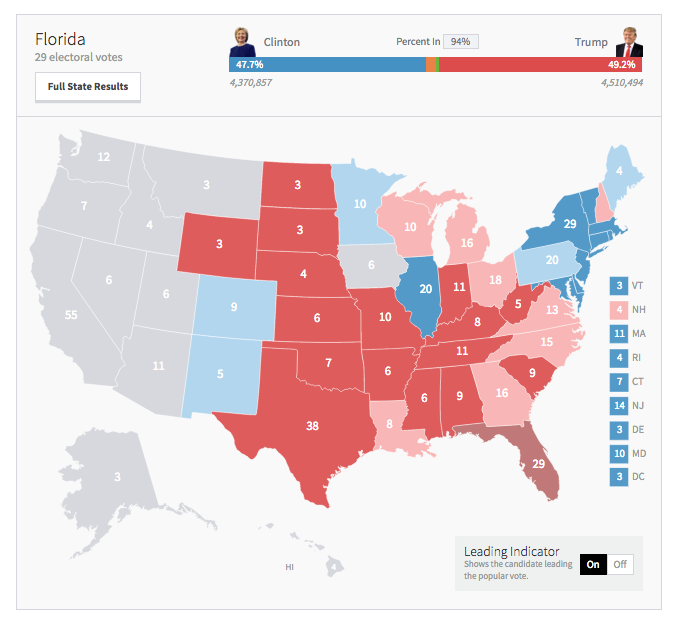 Clinton thanks her campaign and supporters in an eerie message via Twitter, saying, "Whatever happens tonight, thank you for everything."

This team has so much to be proud of. Whatever happens tonight, thank you for everything. pic.twitter.com/x13iWOzILL

Trump at 67 electoral votes; Clinton at 68

The polls have closed in Virginia, North Carolina, South Carolina, Georgia, and Florida. The states have begun counting votes.

MRCTV will be here until the polls close Tuesday, bringing you up-to-the-minute info on election results! The first polls on the East Coast closed at 6 p.m. EST.

Expect the final election results to come in around 11 p.m. EST, soon after the polls close on the West Coast.