Writer for Samantha Bee: 'Civility is a Tool of White Supremacy'

I’d call the subject of the following story dumb, but that word simply isn’t strong enough. Let’s go with "racist."

Yeah, racist sounds just about right. Although, the term "black supremacist" comes to mind, too.

Ashley Nicole Black — a writer for Samantha Bee’s divisive “comedy” show on TBS — thought it’d be a wonderful idea to go on Twitter and display her extraordinary dumbassery for the world to see.

How in the blue hell did Black come up with that?

Civility is a human trait. Of course, not all human being possess said trait, as evidenced by Black’s tweet. But, for someone to come up with something so irrefutably ignorant boggles my mind.

Then again, Black writes for Samantha Bee, so it’s not that difficult to imagine how Black came up with her “theory.”

Black’s description of herself on her Twitter page tells me all I need to know about how close-minded the troop at Bee’s show really thinks.

“All opinions are my own,” Black wrote, “and probably correct.”

When you’re as vain as Black seems to be, you’d think you’re correct more times than not as well.

For further evidence of how completely inept Black is, take a look at some more of her recent tweets: 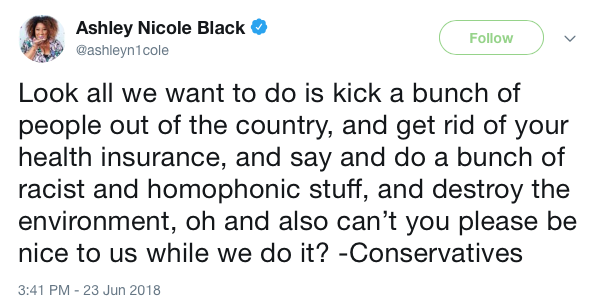