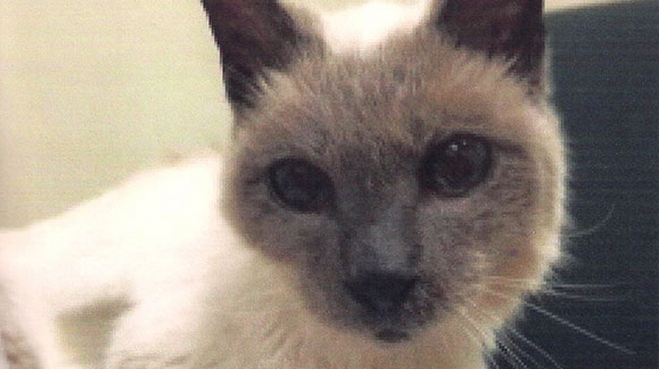 He looks pretty good for his age, if I do say so myself.

Incredibly, Scooter is a full four years older than the previous record holder, “Corduroy,” who is 26 and apparently still alive. I guess they just hadn’t heard about Scooter the last time Guinness went out in search of the world's oldest cat. (Tracking down old cats is a hard gig. They can still run pretty fast, despite their age.)

Born March 26, 1986, Scooter lives with his owner, Gail Floyd. According to Floyd, Scooter wakes her up every morning at 6 a.m., “talking” and jumping around, and is always waiting by the door when she arrives home from work. (If my cat woke me up at 6 a.m., there's no way he'd make it to 30.)

His favorite snack is chicken – which he’s treated to every other day. (So we have that in common)

According to the website CalculatorCat.com, 15 cat years is the equivalent of 82 human years. This means that if Scooter were a human being, he’d be extremely dead.

Despite Scooter's longevity, he has a ways to go before breaking the record of the oldest cat ever. That title belongs to Crème Puff of Austin, Texas, who lived 38 years. This is definitive proof that if you want your cat to live for an extraordinarily long time, move to Texas

So congratulations, Scooter. Here’s to 30 more years of sleeping on the couch 17 hours a day and eating bugs. I mean, I assume that’s Scooter’s secret to longevity since those are my cat’s hobbies. Although my cat is 8, so only time will tell.