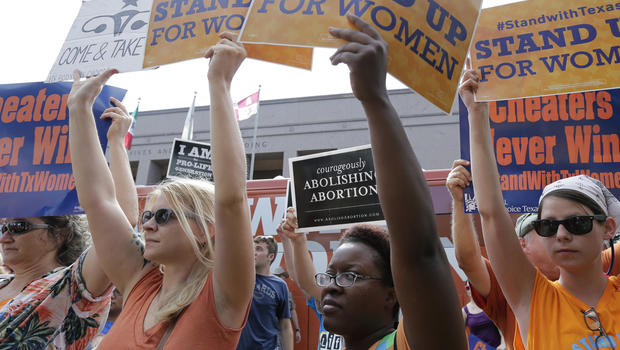 Abortion advocates and pro-life activists alike are gearing up for the upcoming Supreme Court case Whole Woman’s Health v. Hellerstedt, which will pit a 2013 Texas abortion law against abortion clinics that say the new regulations will shut down many abortion facilities and curb women’s access to “health care” across the state.

Set to begin on March 2, Whole Woman’s Health v. Hellerstedt is one of the few abortion cases the Supreme Court has agreed to hear since abortion first became legal after Roe v. Wade in 1973. It will also test on the national level how far states can regulate abortion without placing an "undue burden" on women trying to get one.

2. Scalia’s death could have a huge impact on Texas abortion law.

As one of the more conservative-leaning justices on the Court, Scalia’s death on Feb. 13 raises the possibility that the now eight-person court could remain evenly divided on the case. Such an occurrence would mean that the Fifth Circuit Court of Appeals decision upholding the Texas law would stand, resulting in the closure of more than half of the state's 18 or so abortion clinics. And while the lack of a majority decision wouldn't affect other courts across the country, it could encourage other states to consider similar legislation.

In this event, it would be theoretically possible for the Court to make a decision, without actually making a decision.

She's that Democratic state senator who launched into an 11-hour fillibuster in protest of abortion regulations back in 2013. This was the bill she was protesting. The speech catapulted Davis to fame and prompted her bid for the governorship against sitting Gov. Greg Abbott, who won in a 20 percent landslide. (It also came out that Davis had lied misspoken regarding certain facts from her past, but we disgress.)

4. What exactly does the Texas law say?

We’re glad you asked! In a nutshell, Texas lawmakers are requiring that abortions can be performed in the state only under the safest and most sanitary conditions possible -- the exact same conditions a person would be provided with if they're having an appendectomy or getting their tonsils removed in an outpatient procedure.

And while media reports will gladly tell you what the Texas regulations say without pointing you to the actual law itself, if you’d prefer to think for yourself, you can read Texas S.B.5 right here.

5. Abortion clinics say the law imposes unnecessary regulations -- but why?

It’s true that the Texas law requires abortion clinics to have admitting privileges to a hospital no more than 30 miles away. Because if something were to go terribly wrong during the incredibly unnatural process of sucking a 19-week-old unborn child from a woman’s womb, such as uncontrollable bleeding or an adverse reaction, it might be helpful to be able to get her to a hospital designed to deal with medical trauma beyond an abortionist's skills, experience or resources.

The law also mandates that abortion facilities meet the same minimum standards set for ambulatory surgical centers (ASCs) in terms of construction and safety -- most of which don't. One example often cited by critics of the law is that these standards require a hallway to be at least eight feet wide, something abortion advocates claim is ridiculous and unnecessary for an abortion clinic. (Then again, if you think abortion is virtually the same as going to the dentist, this may make sense to you.)

What critics fail to acknowledge in their tirades, however, is that hallways in surgical centers are required to be eight feet wide so that a gurney can be used to wheel an immobile patient down the hallway, which could arguably be useful following a botched abortion attempt in which one living person is dilberately and prematurely removed from another. The regulations also stipulate how breakable glass can be and how floors should be maintained for safety.

Want to read the rest of the ASC regulations yourself? Check them out here.