What? CBC Reports The Top Way To 'Mitigate Climate Change' - Have Less Children

Whether it’s on the radio, or the television, we hear about climate change all the time. It can get kind of sickening, you know?

But I think there’s another thing that's a bit more sickening than hearing about climate change -- and that’s when a broadcasting outlet uses climate change to push an agenda on you.

What’s the agenda? The Canadian Broadcasting Corporation, which is tax-funded, is out to convince Canadians that the top way to reduce climate change is to reduce the size of their family.

In a list of "11 things you can do to mitigate climate change," the CBC uses research information done in part by Seth Wynes — a PhD student at the University of British Columbia — to tell their viewers the best thing they can do is ‘have one fewer child.’ 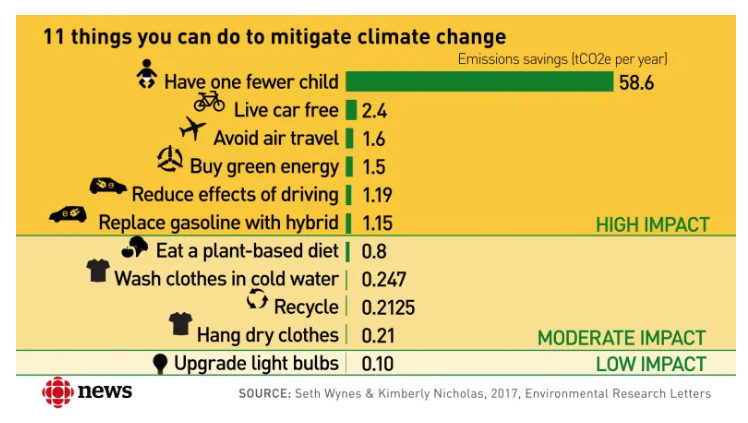 They claim limiting the number of children you desire can save 58.6 tons of carbon dioxide emissions per year. Having one fewer child… I’ll say it one more time: having — one — fewer — child. Population control much?

Did the CBC forget that former “one child per family” China is the biggest CO2 producer in the world? Didn’t seem like the reduction of family size helped them. I’m not good at math, if the CBC applied this “top way” to reduce climate change to China, when the 'one-child policy was enacted,' how many children would that have allowed each family to have?

The second way they claim you can ‘mitigate climate change’ is to ‘live car free’ which saves 2.4 tons of CO2 emissions per year.

With the difference in emissions savings between the “top way” (58.6 tons) and the “second to top way” (2.4 tons) being so drastic — 56.2 tons to be exact — it seems these folks are stressing to people that the “right” choice is to make “large” families disappear.

One Canadian Twitter user sums it all up quite perfectly, she tweeted, “Behold, the wisdom of the Canadian Broadcasting Corporation (our liberal government propaganda arm). "Stop having children, it's bad for the environment, but we need mass immigration because there's no one to fund our pensions." 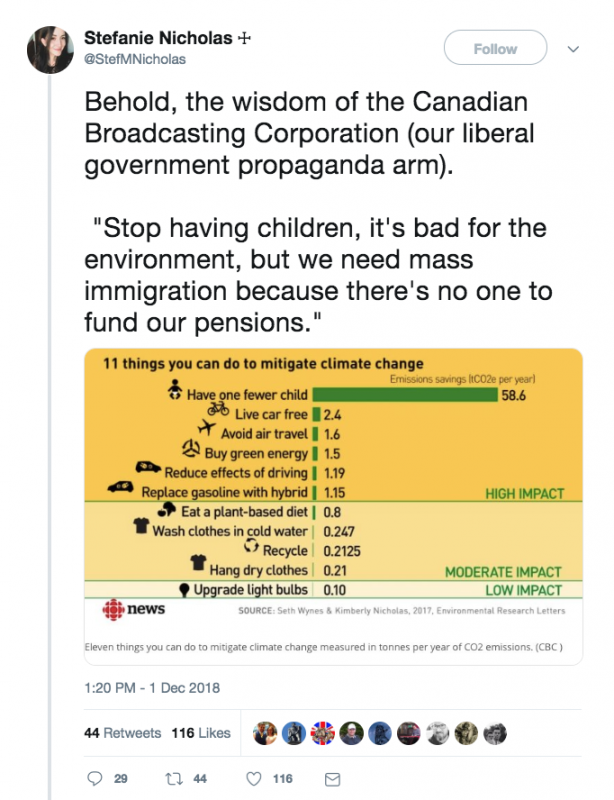