‘We Know Where You Sleep at Night’: Antifa Mob Protests Outside Tucker Carlson's Home, Demands He 'Leave Town'

After receiving backlash for not taking action, Twitter has suspended the account of the Antifa group, @SmashRacismDC, who organized a protest outside of Fox News host Tucker Carlson's home in Washington, D.C., Wednesday night and posted his family's home address online.

Here is video of the mob, as the video on Twitter was removed along with the account.

According to The Gateway Pundit, the group dispersed minutes after the police arrived. No arrests were made.

An angry mob held a protest outside of Fox News host Tucker Carlson's house in Washington, D.C., Wednesday night. The group that organized the protest posted his home address online. He has a wife and four kids.

Carlson, host of “Tucker Carlson Tonight,” was at the Fox News studio when the mob appeared outside of his house, according to The Daily Caller. They showed up an hour before his show was scheduled to air. It is uncertain whether his wife and children were home at the time.

Video of the protesters, organized by a group called “Smash Racism DC,” shows them on the lawn with it pitch-black outside, chanting, “Tucker Carlson, we will fight! We know where you sleep at night!” and “Racist scumbag, leave town!”

“Tucker Carlson, we will fight!
We know where you sleep at night!”

The group used the morbid hashtag “#KnockKnockTucker” to promote their protest on Twitter and went so far as to post a picture of a sign with the Carlson family’s address on it.

Video shows one protester run up to the Carlson's door, ring the doorbell, and leave the sign on their doorstep.

Twitter also removed -- or rather, hid -- the rest of Smash Racism DC’s tweets of the protest, MRCTV discovered.

When a person tries to follow the links to the tweets, the following Twitter message comes up: "Sorry, you are not authorized to see this status.” 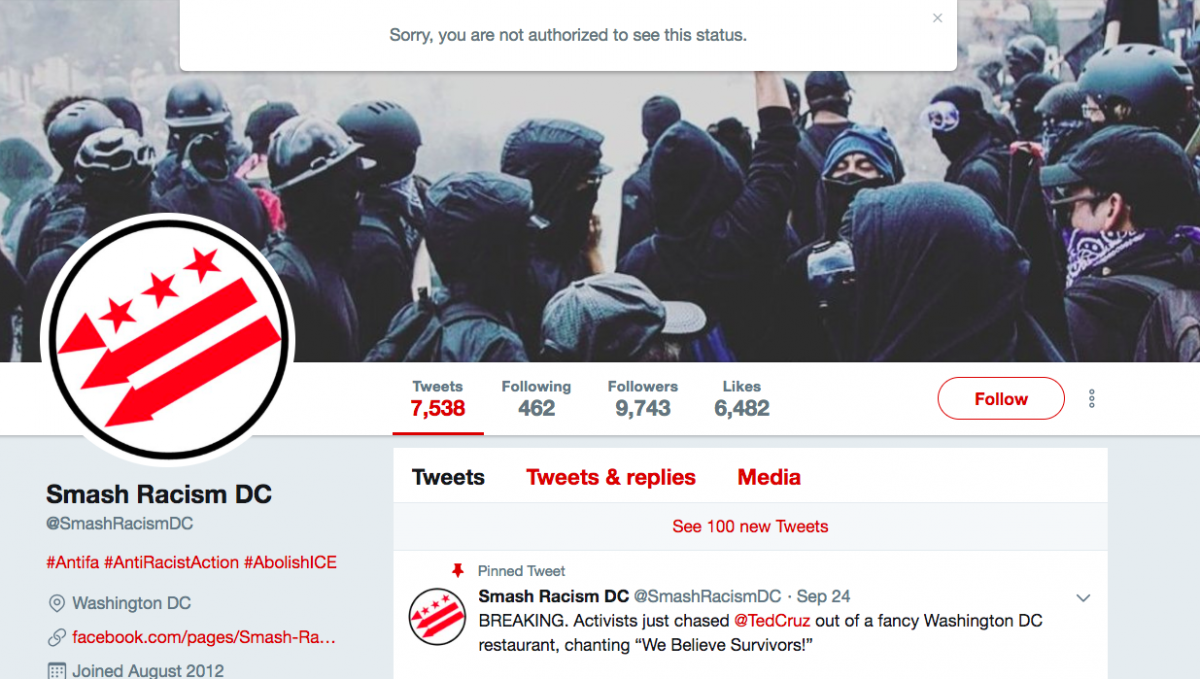 The tweets had captions labeling Carlson as a “racist, sexist, bigoted FOX News personality” and accusing him of “fearmongering toward immigrants.”

In protest of his views on immigration, the group wrote, “Every night you spread fear into our homes—fear of the other, fear of us, and fear of them ... Tonight, we remind you that you are not safe either.”

Conservative talk radio host and spokesperson for the NRA Dana Loesch called out Twitter CEO Jack Dorsey for not doing enough because, while the group's tweets about the protest were hidden, their account remained active. 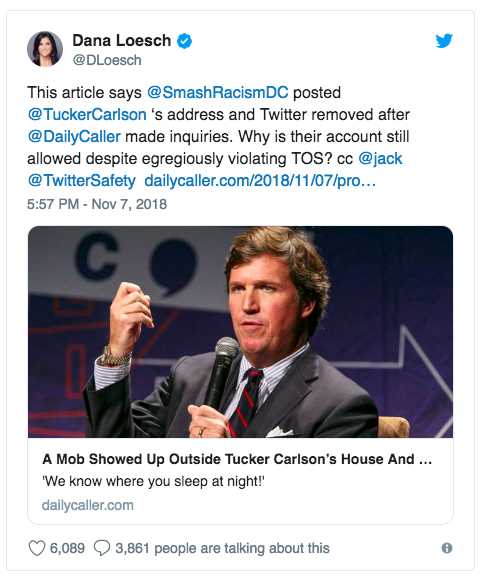 It has not been revealed whether Carlson’s wife of 27 years, Susan Andrews, and his son and three daughters were at the house when the mob appeared, as no one answered the door when one of the protesters rang the doorbell. But why would they, what with a mob of people dressed in black hoodies, holding signs and God knows what else, standing on their lawn.

Many on Twitter took to Carlson’s defense, even those who disagreed with his views. 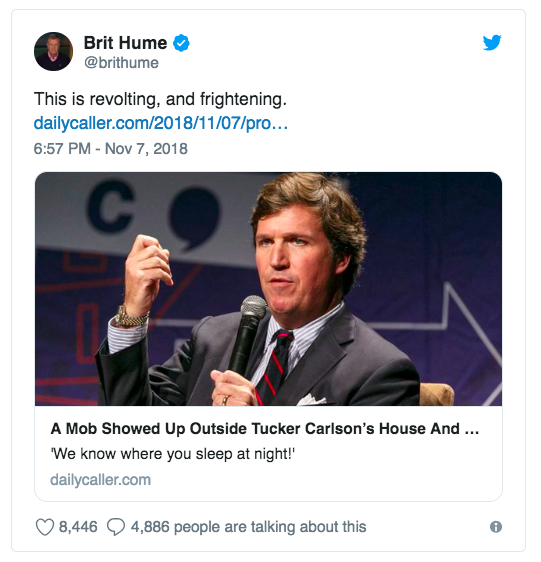 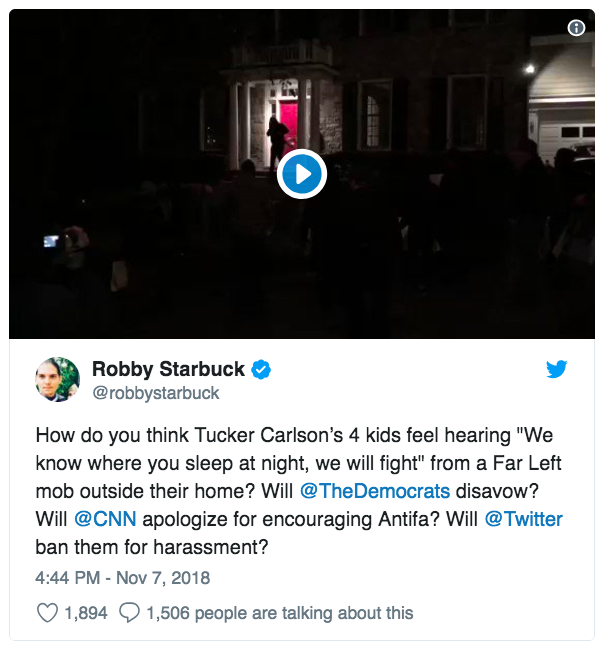 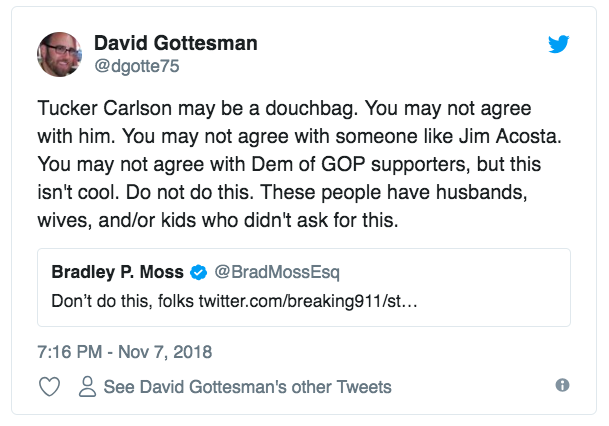 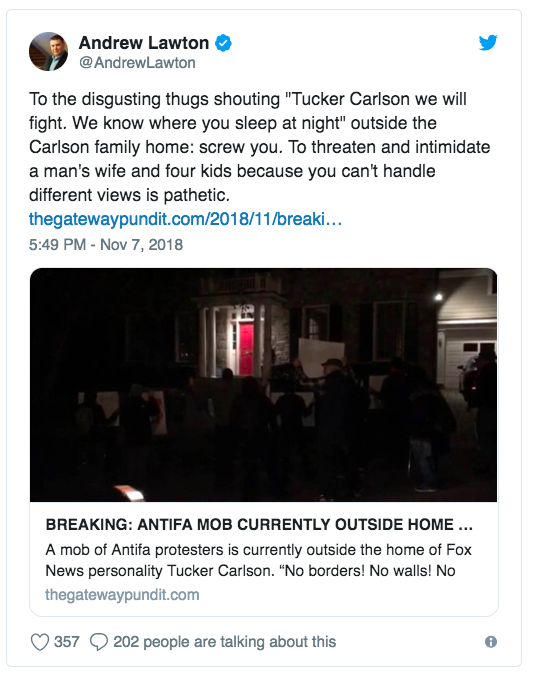 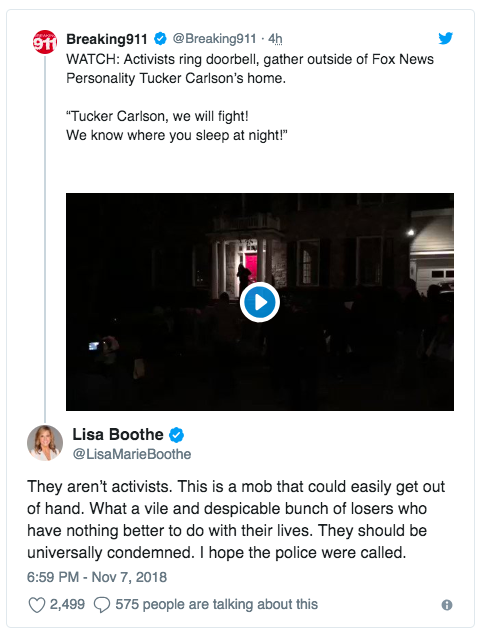 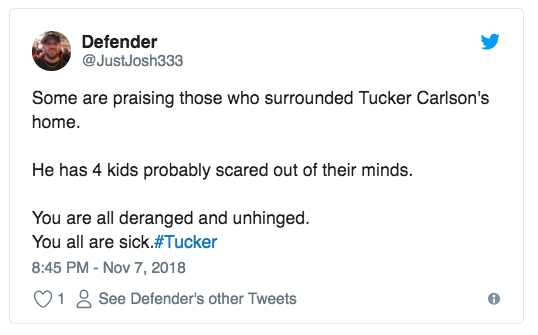 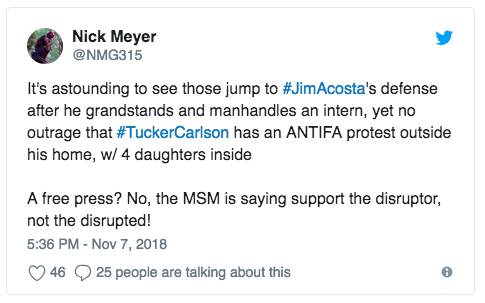 Twitter users also pointed out how there was zero coverage of the incident by the liberal media.

Others tried to justify Antifa’s actions and even made fun of him and his family: 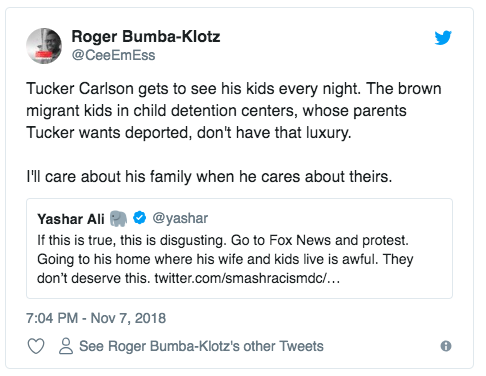 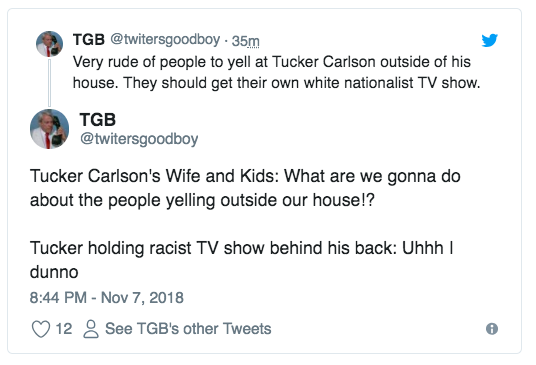 According to The Gateway Pundit, a Twitter account affiliated with the DC Antifa group published the home addresses of Tucker Carlson’s brother Buckley Carlson, conservative commentator Ann Coulter, The Daily Caller’s Neil Patel, and Fox News host Sean Hannity, just hours after the mob showed up at the Carlson’s.

The account name was redacted for the purposes of keeping the addresses from being further publicized.

“Someone affiliated with DC Antifa told The Gateway Pundit that the protest at Carlson’s home was ‘just the beginning,’” writes the conservative news site.