The House Intelligence Committee has decided to end its investigation into Russian meddling in the 2016 presidential election, finding no evidence of collusion between the Russians and the Donald Trump campaign.

Rep. Mike Conaway (R-Tex.), who was tasked with overseeing the probe after the former chairman Rep. Devin Nunes (R-Calif.) stepped down amid an ethics investigation, told reporters on Monday that the committee will no longer be interviewing any more witnesses and that committee Democrats can expect to receive the Republicans’ final report for review on Tuesday, according to The Hill.

“We found no evidence of collusion,” said Conaway. “We found perhaps some bad judgment, inappropriate meetings, inappropriate judgment in taking meetings — but only Tom Clancy could take this series of inadvertent contacts, meetings, whatever, and weave that into some sort of a spy thriller that could go out there.”

He added that committee Republicans could not “establish the same conclusion” drawn by the U.S. intelligence community that Russian President Vladimir Putin “specifically wanted to help” then-candidate Donald Trump.

That being said, "The committee's report will conclude that they agree with 98% of the intelligence community's January 2017 assessment that Russia meddled in the 2016 election, according to a committee aide," CNN reports.

Conaway said that the Republicans' report will also address “how anti-Trump research made its way from Russian sources to the [Hillary] Clinton campaign,” referring to the so-called Trump dossier.

“We will say that there was an attempt to use foreign sources with respect to the Clinton campaign,” he said. “It was clear that it there was — at least Steele and however much he talked and didn’t talk to Russians — that’s foreigners and that information was paid for by the [Democratic National Committee] and the Clinton campaign.”

Though, he added, “I don’t have any direct evidence that they knew about it.”

It is anticipated that committee Democrats will draft their own report as they have accused their Republican counterparts of wanting to protect the President.

The investigation was launched in January 2017. The committee has since reviewed over 300,000 documents and interviewed 73 witnesses, including former White House chief strategist Stephen Bannon, Trump's son Donald Trump Jr., and Trump's son-in-law and senior adviser Jared Kushner, reports The Hill.

President Trump has repeatedly denied any and all allegations of collusion with Russia.

On Monday, he tweeted that the “only Collusion was that done by the DNC, the Democrats and Crooked Hillary.” 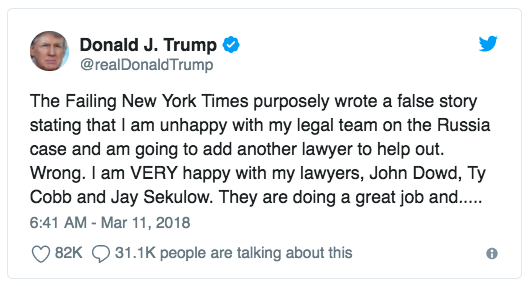 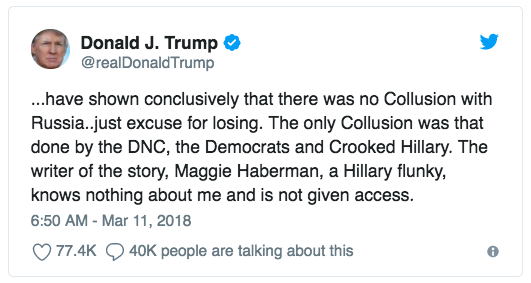