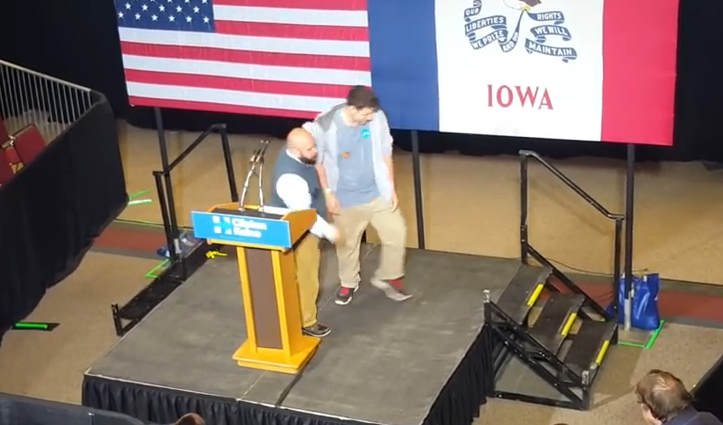 I guess vetting isn’t one of the Clinton campaign’s strong suits.

An Iowa State University (ISU) student was pulled off stage this past Saturday during a Hillary Clinton campaign rally for saying some things that weren’t too Hillary-friendly.

The president of the Iowa State chapter of the Students for Bernie club, Kaleb Vanfosson, took both Donald Trump and Hillary Clinton to task ahead of a speech by former presidential candidate Bernie Sanders.

While speaking on this topic, Vanfosson brought up how Trump always talks about how “hard working immigrants" negatively impact the U.S., but he never speaks about student debt. This segued into Vanfosson’s comments about Clinton.

We can't trust Hillary. She is so trapped in the world of the elite that she has completely lost grip of what it's like to be an average person. She doesn't care. Voting for another lesser of two evils, there's no point.

As the audience cheered and shouted out in response to Vanfosson’s comments, a man came on stage and whisked him away to what can only be assumed was Never-Neverland.

Both Clinton and Trump have been unpopular alternatives for former Sanders supporters, some of which are clearly still not thrilled about voting for the Democratic nominee.

For video of the situation, watch below: