“We want his badge, we want his gun, we want his job,” Jarrett Maupin, a high-profile Phoenix area police protest organizer, was accustomed to shouting – that is, until he underwent a use of force training exercise with the sheriff’s department that radically changed his position.

The Maricopa County Sherriff’s Department invited Maupin to undergo a standard training exercise that all police officers receive, where they must make a split-second decision on whether to shoot in three different scenarios. In one of those scenarios, a man is unarmed.

The training begins in a parking lot with a suspect casing cars. Maupin starts asking the suspect what type of car he drove, when the suspect shoots him. It happens that fast.

“When he came to the back of the vehicle and started hiding, I could sense something was wrong,” Maupin said, but it was too late. 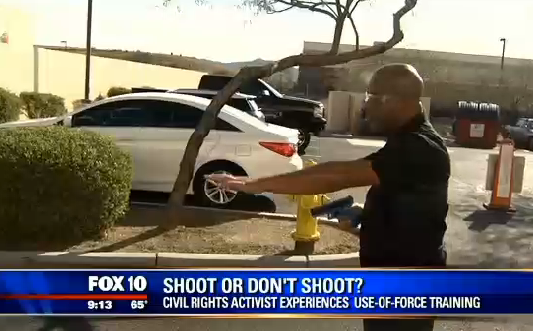 In the second scenario, Maupin is called to the scene of an argument that is turning physical. “What’s going on today gentlemen, what are you doing?” he says, when suddenly one of the men charges him.

“Back up!” shouts Maupin, but the man continues approaching, and Maupin fires.

“What are you doing?” shouts the instructor. “You just shot him?!”

The man was unarmed.

“Hey, he rushed me … I shot because he was in that zone… I felt he was an imminent threat… he came clearly to do some to the officer, to my person,” Maupin explained to Fox 10 reporters, who the Maricopa County Sherriff’s Department had invited.

“It’s hard to make that call; it shakes you up,” he said – the beginning of an epiphany for Maupin.

The third scenario: a caller says a possible burglar is walking down the street.

Maupin gets the suspect on the ground, but the suspect stops complying when he’s told to keep his hands up. “I need you to keep your hands up, sir,” he says.

“For what?” replies the suspect.

“Because I need to check what's in the waistband," replies Maupin.

“Because I don’t know what you have under there,” says Maupin, finding a hidden knife.

The reporter from Fox 10 also went through the training, without seeing what Maupin did. The results were the same.

Asked what his biggest take-away was, Maupin cited compliance: “everything unfolded in 10-15 seconds.”

“I didn't understand how important compliance was, but after going through this; yeah my attitude has changed,” said Maupin. “People need to comply for their own sake.”

Watch the clip to see Maupin’s stunning transformation for yourself.