WATCH: WH Press Sec. Sean Spicer Gets Into It With Reporter Over Trump Travel ‘Ban’ 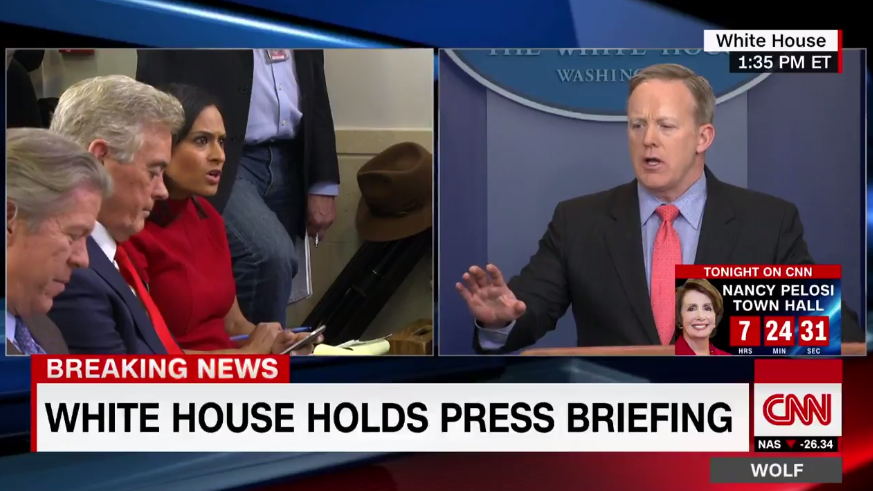 During Tuesday’s briefing, White House press secretary Sean Spicer was pressed by a reporter to call the executive order a travel “ban,” as President Donald Trump had in a tweet.

Spicer argued that the President was simply using the language exercised by the media and that Trump "has been very clear that it is extreme vetting."

“He says it’s a ban,” a reporter told Spicer.

“He’s using the words that the media’s using,” Spicer replied.

“Those are his words!” the reporter shouted.

“It can’t be a ban if you’re letting 1 million in,” said Spicer. "That is by nature not a ban. It is extreme vetting.”

“But the President himself called it a ban,” the reporter insisted. “Is he confused or are you confused?”

“No I’m not confused,” said Spicer. “I think the words that are being used to describe it are derived from what the media has been calling this. He has been very clear that it is extreme vetting.”

White House press secretary insists travel ban is not a ban despite the President’s tweet calling it one https://t.co/RPlwnRpVvF pic.twitter.com/n8qT5MqHFy

Immediately following news of President Trump’s executive order on immigration, the media and Democrats labeled the action as a “Muslim ban.”

Trump has described the action as extreme vetting, desperately needed to combat the threat of radical Islamic terrorism.

He tweeted on Monday defending the measure, saying that, “There is nothing nice about searching for terrorists before they can enter our country. This was a big part of my campaign.”

In response to those who criticized the executive order as an abrupt action, the President added, “If the ban were announced with one week notice, the ‘bad’ would rush into our country during that week.”

If the ban were announced with a one week notice, the "bad" would rush into our country during that week. A lot of bad "dudes" out there!

Members of the Trump administration – including White House press secretary Sean Spicer and Department of Homeland Security secretary John F. Kelly – have been tasked this week with the headache of explaining to the American people that the executive order is not a travel ban nor a ban on Muslims as the media describes, but a temporary halt on the flow of refugees and visitors to the U.S. from Middle Eastern and African countries of “particular concern.”

The media and Democrats have accused the action as being religiously-based, being that the seven countries listed on the executive order are predominantly Muslim countries.

Democrats in Congress attempted to overturn the executive order but were unsuccessful at doing so.