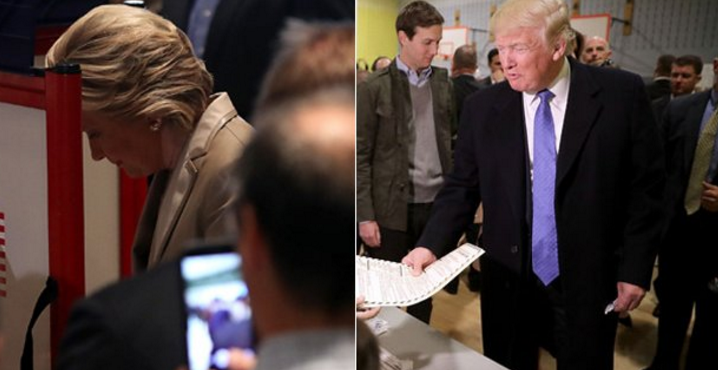 Alongside her husband Bill, Hillary went to an election center in Chappaqua to cast her vote.

.@HillaryClinton walks in to cast her vote at an election center in Chappaqua, New York. #ElectionDay #FoxNews2016 (VIDEO: @JakeBGibson) pic.twitter.com/GWdCCRIPRP

Kaine wanted to be the first one in line to cast a ballot but a 99-year-old woman beat him to the punch.

I wanted to be first at my polling place, but 99-year-old Minerva Turpin beat me to it. Looks like I need to get used to being number two! pic.twitter.com/9YvWOjuKUe

Trump and his wife Melania voted on the Upper East Side in New York City.

Trump departs PS59 after spending several minutes inside with his family pic.twitter.com/NUqZMhyWu8

His running mate Indiana Gov. Mike Pence voted with his wife in Indianapolis.

Now the two major candidates must wait as voters go to the polls and choose who they want in the White House come 2017.

MRCTV will be covering Election Night live as the results roll in. Stay tuned!