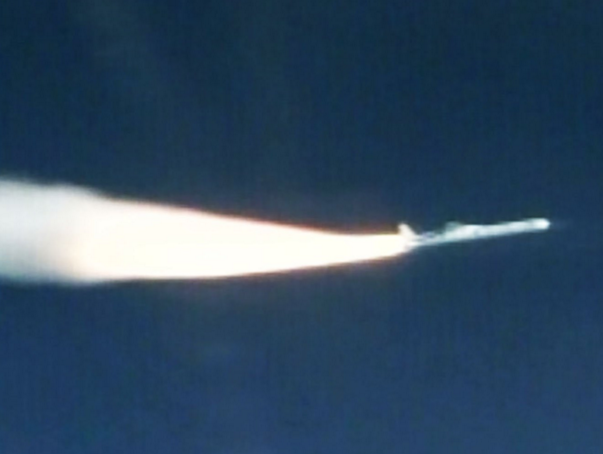 Video shows NASA launch the micro-satellites not with a spaceship, but with a plane.

“The unique, air-launched vehicle was carried aloft by Orbital’s modified L-1011 aircraft, ‘Stargazer,’ which took off from the Skid Strip runway at Cape Canaveral Air Force Station in Florida and deployed the three-stage Pegasus XL rocket at a predetermined drop point 39,000 feet above the Atlantic Ocean and about 110 nautical miles east-northeast of Daytona Beach,” writes NASA.

The Cyclone Global Navigation Satellite System (CYGNSS), once in orbit, can capture wind speed, which will help NASA determine the intensity of hurricanes early on.

So far, NASA has been able to make contact with three of the eight satellites.

Check out video of the launch below.

.@OrbitalATK's aircraft carry the rocket with our #CYGNSS hurricane mission is airborne! Launch at 8:35am ET. Watch: https://t.co/KX5g7zfYQe pic.twitter.com/W2H85NnJco

Launch! @OrbitalATK’s rocket released from the aircraft and our #CYGNSS hurricane mission is headed to orbit. Watch: https://t.co/KX5g7zfYQe pic.twitter.com/MuydYrsprI

View from the plane chasing the Stargrazer aircraft deploying the rocket with NASA's #CYGNSS #smallsats. The 1st sat has now made contact! pic.twitter.com/38bqfNQHf5

Here’s a simulation that shows how the satellites deployed from the Pegasus XL rocket in space.

Tomorrow, our #CYGNSS hurricane mission will launch at 8:24am ET. Live coverage starting at 6:45am. More: https://t.co/Iy4qxEIckt pic.twitter.com/OozadbaEsP